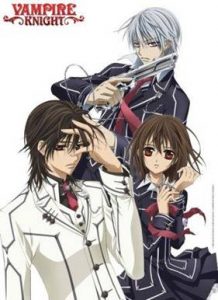 “VIZ Media celebrates the season with a special Download-to-Own promotion on the iTunes Store in the U.S. (www.iTunes.com), perfect to round out digital holiday gift lists to delight audiences young & old.
Just in time for the holidays, from now until February 1st, download for FREE the full first episodes for VAMPIRE KNIGHT, BLEACH, KEKKAISHI, and NARUTO SHIPPUDEN. All subsequent episodes are available to rent for only $0.99 each, or to own for only $1.99 each.
Please visit http://www.itunes.com/anime for complete details.
BLEACH (rated TV-14) follows the adventures of Ichigo, a 15-year old student with the ability to see ghosts. When his family is attacked by a Hollow — a malevolent lost soul – Ichigo encounters Rukia, a Soul Reaper, and inadvertently absorbs her powers. Now, he’s dedicating his life to protecting the innocent and helping tortured souls find peace.
KEKKAISHI (rated TV-PG) is the story of mystical forces powerful in the region known as Karasumori. For over 400 years, it has been the duty of a clan of “kekkaishi”— barrier masters — to guard this land and exterminate the supernatural creatures that are drawn to it night after night. Yoshimori Sumimura is a junior high school student at Karasumori Academy. Following in the tradition that’s been passed down through generations, he is the twenty-second “kekkaishi” of the Sumimura clan. But by day, Yoshimori’s got other demons to battle: an addiction to sweets and a seriously crotchety grandfather! Yoshimori’s pretty neighbor, childhood friend and rival, Tokine Yukimura, is also a “kekkaishi,” but their families are feuding over who is the true practitioner of the art. Protecting people from danger while growing stronger himself, Yoshimori will battle the forces of evil again tonight!
In NARUTO SHIPPUDEN (rated TV-14), Naruto Uzumaki, a young ninja in training, wants to be the best ninja in the land. He’s done well so far, but Naruto knows he must train harder than ever and leaves his village for intense exercises that will push him to his limits. NARUTO Shippuden begins two and a half years later, when Naruto returns to find that everyone has been promoted up the ninja ranks—except him. Sakura’s a medic ninja, Gaara’s advanced to Kazekage, and Kakashi…well, he remains the same. But pride isn’t necessarily about becoming a ninja, especially when Naruto realizes that Sasuke never returned from his search for Orochimaru. Plus, the mysterious Akatsuki organization is still an ever-present danger. As Naruto finds out more about the Akatsuki’s goals, he realizes that nothing in his universe is as it seems. Naruto is finding that he’s older, but will he also prove wiser and stronger?
In VAMPIRE KNIGHT (rated TV-14), Cross Academy is attended by two groups of students: the Day Class and the Night Class. At twilight, when the students of the Day Class return to their dorms, they cross paths with the mysterious Night Class on their way to school. Yuki Cross and Zero Kiryu are the Guardians of the school, protecting the Day Class from the Academy’s dark secret: the Night Class is full of vampires! Yuki Cross has no memory of her past prior to the moment she was saved from a vampire attack ten years ago. She was adopted by the headmaster of Cross Academy, and now works alongside Zero to guard the Academy’s secret. Yuki believes that vampires and humans can coexist peacefully, but her partner has different ideas…”