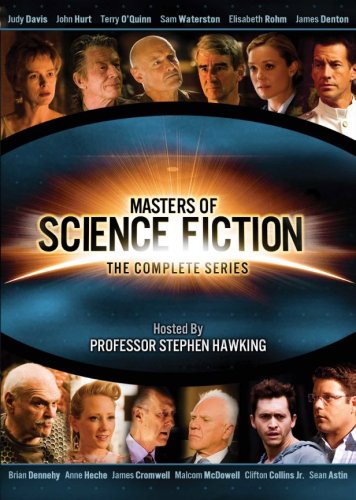 On August 5, Anchor Bay will be releasing a 2-disc DVD set of the short-lived series, which aired last year on ABC. A sort of companion piece to Showtime’s MASTERS OF HORROR, MASTERS OF SCIENCE FICTION features episdoes based on stories by classic science fiction writers such as John Kessel (“A Clean Escape,”), Harlan Ellison (“The Discarded”),  Robert Heinlein (“Jerry Was a Man”), and Robert Sheckley (“Watchbird”). Screenwriters included Walter Mosely (author of the Easy Rawlins mysteries), J. Michael Straczynski (BABYLON 5), and Micheal Tolkin (THE RAPTURE).
The episode I saw, “The Awakening,” starring Terry O’Quinn, failed to excite interest in the rest of the series, but the DVD release will provide an opportunity to sift through the remaining episodes for any hidden nuggets of gold. Other stars include Judy Davis, John Hurt, Brian Dennehy, Anne Heche, Malcolm McDowell, James Cromwell, and Sally Kellerman.
Read the official press release below the fold.

BURBANK, CA (June 11, 2008) – Science fiction has long been the genre for some of the most innovative stories ever created, propelling fans into fantastic realms that can inspire – or instill fear. Now, some of the world’s most highly regarded science fiction writers and a lineup of top actors – along with one of the greatest living scientists – have joined forces to reach the outermost limits of human imagination, while tackling many of the most powerful and controversial social issues in the process. On August 5th, Anchor Bay Entertainment will release the critically acclaimed Masters of Science Fiction anthology series on DVD as a 2-disc set. The Masters of Science Fiction DVD contains the entire series – including the world premiere of two episodes never-before-aired! SRP is $29.97.
Originally broadcast last year on ABC, Masters of Science Fictionadapted short stories from some of the genre’s greatest practitioners, including Robert Heinlein, Harlan Ellison, Robert Sheckley and John Kessel. Mark Dawidziak of the Cleveland Plain Dealer wrote: “I’ve seen what may be the best futuristic anthology series since the glory days of ‘The Twilight Zone’ and ‘The Outer Limits.’ It’s called ‘Masters of Science Fiction.’“
The all-star casts feature Malcolm McDowell (A Clockwork Orange), Sean Astin (the Lord of the Rings trilogy), James Cromwell (The Queen), Terry O’Quinn (“Lost“), Judy Davis (Marie Antoinette), John Hurt (V for Vendetta, Indiana Jones and the Kingdom of the Crystal Skull) and directors including Jonathan Frakes (Star Trek First Contact, Star Trek Insurrection), Harold Becker (Sea of Love), Mark Rydell (For The Boys, On Golden Pond) and Michael Tolkin (The Player, The Rapture). Just as impressive is the series host – Nobel Prize-winning theoretical physicist Stephen Hawking (A Brief History of Time).
The following six unique flights of imagination observed under science’s microscope are included in the Masters of Science Fiction DVD: