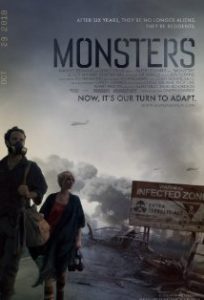 The Hollywood Reporter says that Gareth Edwards (MONSTERS) is poised to sign with Legendary Pictures and Warner Brothers to direct their version of the classic Toho giant monster GODZILLA.
Edwards’ MONSTERS , which the former Visual FX artist and documentary maker wrote and directed in the hopes of attracting bigger projects, featured glimpes of giant, tentacled alien monsters making life hazardous for two people trying escape a quarantined zone of infestation for the safety of the U.S.
The article says Gareth Edwards will work on the screenplay with a an as yet unhired writer, presumably  based on the previous  script by David Callaham (DOOM, THE EXPENDABLES).
MONSTERS brought Edwards  three British Independent Film Awards.