Not a spoof but a modern re-imagining of ’50s sci-fi movies.

Deep in the forest I whirl
Like I did as a little girl
Let my eyes rise in the sky
Looking for you, oh you know
I would go anywhere at all
Cause no star is too far with you
La… la… la… la…la… Landing
Please, oh won’t you return
Feel, feeling my heart expanding
You and your alien arms

Rather strangely, a mere week after Aliens Vs. Monsters, we have yet another film inspired by those fabulous science-fiction films of the ’50s, ALIEN TRESPASS. Luckily, this new film isn’t aiming for the lowest common denominator and trying to offer something for everyone. Instead, it succeeds by narrowing it’s focus towards a much smaller audience, people who, like the filmmakers, know and love all those glorious ’50S S-F films. Therefore, they can take for granted that the people coming to see it will have a certain knowledge and intelligence about these pictures. Which is presumably why, the picture is being marketed as an art-house release. It is also why several critics don’t seem to understand that the film isn’t supposed to be a satire on the ’50s movies, but rather a straight re-imagining of them, only told from a modern perspective, just as Todd Haynes did so brilliantly in Far From Heaven (2002), his affectionate recreation of all those melodramatic Douglas Sirk films – which, ironically, were made at Universal-International, during the time when Jack Arnold, William Alland and Albert Zugsmith were turning out the S-F classics that inspired Alien Trespass, such as It Came From Outer Space, This Island Earth and The Incredible Shrinking Man.

As in Far From Heaven, director R. W. Goodwin tosses several risqué elements into ALIEN TRESPASS that couldn’t possibly have been considered in the ’50s: like having a heroine saving the world from the alien invader, rather than a hero, and even more taboo, the subject of miscegenation. Of course, instead of a love affair between a white woman and a black man, we get an Earth woman who falls for an alien, even though the alien inhabits the human body of Eric McCormack!
Director R. W. Goodwin, who is best known for his work directing episodes of the X-files, flatly states he was not interested in making a spoof of all the genre movies he so loved. Instead, he realized that the films themselves had become inadvertently funny. This will be clear to anybody who has ever seen these classics at a repertory cinema with an audience, where both the dialogue and situations (like Doctors smoking) often become quite hilarious when seen today. It’s something Joe Dante does so well, especially when he casts all those iconic ’50s actors in his movies, which is probably the biggest missed opportunity in ALIEN TRESPASS. There is, unfortunately, not one cameo appearance by a ’50s star from the genre, and while there are obviously not that many old-timers left around these days, an appearance by even one or two veteran actors would have been a real treat. Luckily, all the actors who do appear are quite terrific in recreating the ’50s style of acting, with Jenni Baird being a real stand-out as the intelligent diner waitress who figures out how to deal with a situation that the local Police won’t even believe is happening. She literally channels Steven McQueen from The Blob, when she saves the day from the alien “Ghota” that terrorizes the local movie theater.
What is also intriguing about ALIEN TRESPASS is that is not a big Hollywood production trying to reproduce old fashioned effects with a huge budget. By today’s standards, this is a very low-budget film. So low-budget it was actually shot in Super 16, with the Canadian desert standing in for the Mojave in Southern California! It’s also nice to realize that the Ghota, the alien monster that is clearly meant to be a fake rubber creature, may have been done that way (at least partially) because the limited budget wouldn’t have allowed for anything as elaborate or expensive as the more realistic CGI monsters that so routinely inhabit today’s S-F films. The Ghota is also a lot of fun as it’s design appears to have been inspired in equal parts by the Venusian from Roger Corman’s It Conquered The World and the Xenophobe’s from It Came From Outer Space. Special care has also been given to recreating the style of rear-projection so popular in ’50s movies, where obvious fringing around the actors indicates they were shot in front of a blue-screen. In fact, ALIEN TRESPASS succeeds so well that I heard one younger viewer sitting near me ask his friend, “Is this supposed to be a new movie?”
Of course, ALIEN TRESPASS won’t ever appeal to or ever reach the kinds of huge audiences that Monsters Vs. Aliens has already attracted, but hopefully it will prove to be an art-house success. It certainly presents us with a much purer vision of that bygone era, and hasn’t been filtered through an endless series of rewrites and committee meetings intended to “improve” it for the widest possible mass consumption. 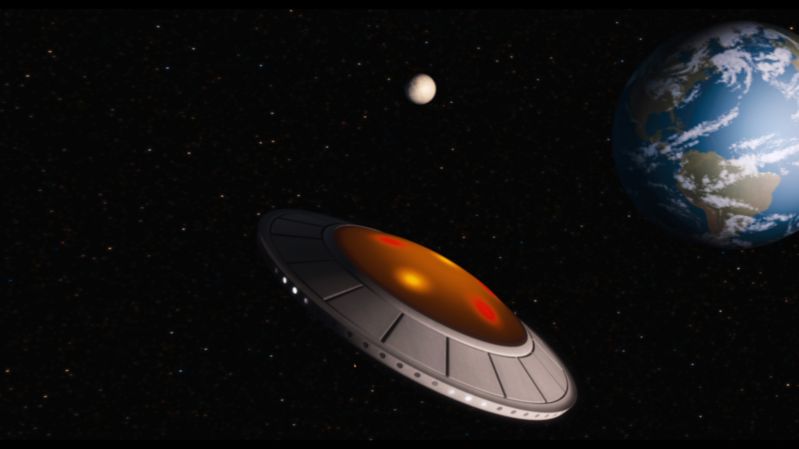