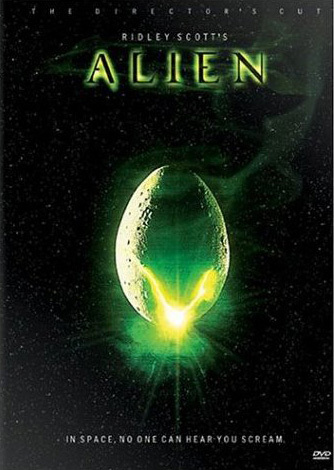 A Gothic horror move set in outer space, ALIEN proved that material derided as B-movie fodder could be handled with finesse and glossy production values, without diminishing the thrills or polishing over the hard-edged horror. Dan O`Bannon`s script is filled with memorable moments of revulsion (the face-hugger, the chest-burster), and the uncredited rewrite by Walter Hill & David Giler adds an impressive layer of gritty, working class characterization. Director Ridley Scott films the whole thing to exquisite effect, capturing both the terror and the beauty of the titular creature, a sleek and amazing design by H.R. Giger that is only briefly glimpsed, preventing us from getting a clear picture of the beast’s nature until the final scenes reveal it in all its glory. Those extreme close-ups, of lips curling back from rows of teeth within teeth, are enough to make the skin crawl, and the atmosphere of dread reaches unrelieved levels, with never a sense of respite being offered.
The story is an amalgam of elements from older sci-fi flicks. The working class crew of the spaceship Nostromo (the name taken from the work of Joseph Conrad, whose story “The Duel” served as the basis for Scott’s debut movie THE DUELISTS) encounter an unknown distress call that leads them to a primordial planet. There they encounter a derelict spaceship housing the skeletal remains of an alien victim (a scene quite similar to one in Mario Bava’s PLANET OF THE VAMPIRES). Kane (John Hurt) is attacked by a “face-hugger” that emerges from an egg and latches onto his face and implants a seed in his stomach (it resembles a green, gooey brain, like the titular critters in FIEND WITHOUT A FACE). Back on ship, the alien spawn eats its way out of his chest and grows into an upright monstrosity that kills off most of the rest of the crew, their efforts to defend themselves hampered by the fact that Ash, their science officer (Ian Holm), turns out to be a robot programmed to retrieve a living alien, for the benefit of the anonymous “Company” that funded the mission. Finally, sole survivor Ripley (Sigourney Weaver) sets the self-destruct mechanism and takes off in the escape pod — only to find the alien inside with her. She manages to don a spacesuit and unlock a hatch, blowing the creature out into the vacuum of space — and blowing it away with the escape pods thruster engines for good measure.
Much praise has been heaped on the film’s special effects and art direction, and deservedly so. Ron Cobb’s designs for the human hardware make a nice, believable contrast with Giger’s bizarre fantasy conceptions, and all of it is expertly captured by cinematography that makes every frame a pleasure to watch.
Yet there is something equally important that is often overlooked, which is the utter conviction with which the simple story is told. In spite of its futuristic outer space setting, and its outrageous monster, ALIEN never seems incredible. Quite the opposite, in fact — it seems all too believable. Partly this is because of the working-class feel of the characters and their quarters (they just seem like truckers in space); partly it is the result of a script that downplays the fantasy. There is no faster-than-light travel, no indications of space colonization, and little or no sign of previous encounters with alien civilization. The result is that a view is inclined to feel: if this were going to happen, it would happen like this.
The result is an almost unrelenting tension that puts other pretenders to the horror throne to shame, whether they are big-budget studio flicks like JAWS or low-budget exploitation shockers like THE TEXAS CHAINSAW MASSACRE. In DRACULA, you felt safe during the day; in JAWS, you felt safe out of the water; but in ALIEN, there is no safe harbor for the crew of the ill-fated Nostromo. And the clever, ten-little-indians plot structure, with no character clearly identified as the protagonist, leaves you genuinely unsure who will survive until the final credits. The cast (which also includes Tom Skerritt, Yaphet Kotto, and Harry Dean Stanton) is excellent, with newcomer Sigourney Weaver showing all the talent that would make her a star. A special nod also should go to Veronica Cartwright for her perfectly realized version of an archetypal genre character — the one who freaks out early on and is almost good for nothing throughout the rest of the movie (think of Judith O’Dea as Barbara in NIGHT OF THE LIVING DEAD). Her wide-eyed terror does an excellent job of sucking the audience into sharing her feelings. Bill Paxton would reprise a male version of this character in the 1986 sequel ALIENS, but as good as he was, he was no match for Cartwright’s pitiful portrayal of agonized fright.
In the end, it is fari to say that ALIEN is probably the most beautiful piece of filmmaking ever about a terrifying subject.

Despite its large budget, ALIEN did not have unlimited resources. Ever since its original release, fans were well aware (thanks to extensive press coverage of the film’s production) that numerous sequences were scripted, planned, and even filmed, but then abandoned due to budgetary restraints. Dallas and Ripley were supposed to have an affair. Parker was supposed to be sucked out a tiny hole when the alien’s acidic blood breached the ship’s hull. And in a final reel revelation, Ripley was to learn that the alien had not been eating its victims; it was cocooning them so that their bodies would mutate into eggs, thus continuing its life cycle.
Only the last of these sequences was filmed in its entirety; it was cut not for budgetary reasons but for pacing. The scene came near the finale while Ripley was racing to set the Nostromo’s self-destruct mechanism and escape before it went off, and the consensus among the filmmakers was that it broke the film’s hurtling momentum.
This sequence and other incomplete footage appeared as bonus chapters on laserdisc and DVD, but in 2004, for the film’s 25th anniversary, 20th Century Fox released a so-called “Director’s Cut” that restored the missing cocoon sequence. Technically, a director’s cut is a contractually mandated cut that a director turns in to the studio that hired him, which may then recut it before release. In the case of ALIEN, we truly have a revised cut, put together with the benefit of decades of hindsight.
Besides the cocoon scene, the new cut restores several small snippets of footage that add a few interesting details for fans. A few notable examples:

Besides adding footage, the revised cut also trims some shots and even deletes a few scenes. The result is that, despite the addition of missing scenes, the “Director’s Cut” is actually shorter than the original cut. The most notable deletions are: 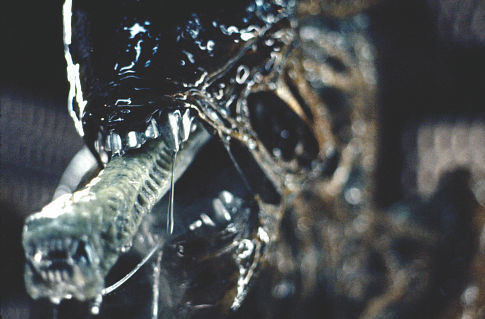