Part Three: The 4-Color Hornet
In The Golden Age

The Green Hornet is a natural character for comic books. Several radio characters made that leap, including The Shadow, the Lone Ranger, and Captain Midnight.
Green Hornet comic books  first appeared with a cover date of December, 1940 — due to the three months in advance dating policy of most publishers, it probably hit the stands in Spetember of that year. 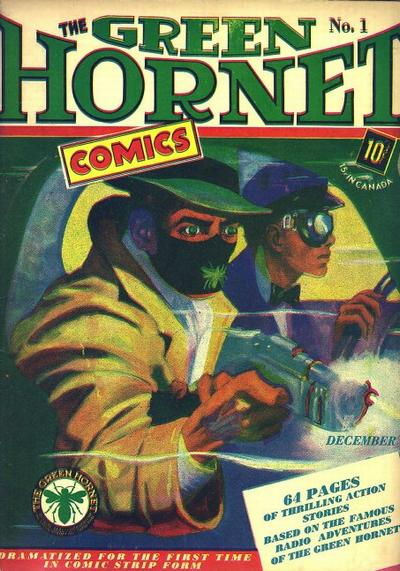 The first series, titled Green Hornet Comics, were published by Helnit/ Holyoke Comics. Unlike most comic book publishers, who were based in New York, they were located in Holyoke, Massachusetts. Stories were credited to Fran Striker, but they were likely freely adapted, possibly directly by the artists from Bert Whitman Associates.
This was one of the many “art shops” put together to supply publishers that did not have full-time comic book staff with product, often churned out in what approached assembly line fashion –- perhaps even sweat-shop conditions under some bosses. Bert Whitman was an editorial and comic strip artist who was also involved in comic books, considered at that time a real step down from newspapers.
Though portrayed with the correct black half-mask on the first issue’s painted cover, the character was soon depicted wearing a green mask with a black hornet on it –- which is much easier to draw and reproduce via rapid printing on cheap newsprint paper.
The Helnit series only lasted six issues, ending in 1942, but was quickly picked up by Harvey Comics. They continued with Helnit’s numbering, their first being #7.


The cover and some of the interior work was by Joe Simon and Jack Kirby, creators of Captain America, and veterans of NY art shops, who later started their own shop. On the cover of #7, the Hornet insigna was omitted from the Green Hornet’s mask. This would apparently happen from time to time in the rush to get the work done.
Harvey did well with the series, which trumpeted the fact that The Hornet was a star On the Air and In the Movies, and published 40 issues by mid-1949. (Technically, the comic was renamed The Green Hornet Fights Crime with issue #34, and The Green Hornet, Racket Buster with #44 –- although on the covers it actually read: Radio’s Racket Buster: The Green Hornet.)
It’s unclear who who and/or adapted the stories for the printed page, though possibly artists/writers like Arthur Cazeneuve (who also drew the golden age Blue Beetle, a super-powered, chainmail-wearing riff on the Hornet, with his own, short-lived Mutual Network radio show) did the work themselves.

Artwork was by a number of hands, possibly by the freelance shop run by Cazeneuve and his brother Louis. A large portion of the work is by Al Avison, who did a lot of Captain America art and other heroes for Marvel Comics, often emulating the Simon/Kirby style.
The Green Hornet also appeared in other Harvey comics from time to time, and other Harvey heroes and features shared his title. It was during the Harvey run that the comic book Hornet began to dress mostly all in green, possibly a result of being handled by people who were more familiar with conventional costumed superheroes, who tended to wear distinct and seldom varying “uniforms”, rather than simply slipping on street clothes and a mask as disguise.
I should note that the Harvey series fairly consistently depicted Britt Reid as having blond hair, which was how it was described in the radio series.


After the radio show went off the air in 1952, Dell comics published a single issue with the character (Four Color Comics #486) in 1953. The painted cover artwork was by Frank Thorne, who also did Flash Gordon and Jungle Jim comics. In later years, he would do “good girl art” for Marvel’s Red Sonja, inspired by Robert E. Howard’s Conan stories.


Whitman Books put out three ‘Better Little Books’, small hard cover books for children, with many comic book style illustrations enlivening the stories. They were The Green Hornet Strikes (1940), The Green Hornet Returns (1941), and The Green Hornet Cracks Down (1942), all credited to Fran Striker.
The Lone Ranger also had books of these variety published, along with a newspaper comic strip, and his own pulp magazine. Despite seeming a natural choice for the blood and thunder single-character pulps, The Green Hornet never cracked that market.
The Lone Ranger made it to television in 1949, and was eventually joined by WXYZ’s Sergeant Preston of The Yukon. However, for various reasons, The Green Hornet did not generate a 1950’s TV series.
George W. Trendle felt that The Hornet could be a big hit on television. Sponsors, on the other hand, were concerned that the grim, violent, often cynical world that Britt Reid lived in would not be as acceptable to parents as the more wholesome and perhaps as importantly, distanced by history adventures of the masked rider of the plains. The adventures of a vigilante in the old West had a nostalgic, fairy tale-like quality, the Hornet lived in uncomfortably relevant modern times.
This had already become a concern on the radio series, with The Green Hornet being eventually cleared of the murders attributed to him, and becoming an ally of Police Commissioner Higgins, a friend of Britt’s father Dan Reid, both of whom now knew Britt’s secret and noble purpose.

Frustrated by a lack of positive response from potential sponsors, George Trendle actually went to the extent of paying for a TV pilot to be made in Hollywood, out of his own pocket (or the company’s). In 1952, LONE RANGER producer Jack Wrather put together a half-hour film, directed by Paul Landres (THE RETURN OF DRACULA), and starring one of radio’s Sam Spade actors and game show host Steve Dunne as the Hornet.
The pilot did not sell the show to advertisers, likely because the pilot’s budget was someting under $30,000 – an insufficient amount to fund an action-adventure show, and the results probably showed onscreen. Shopped around for several years, this reportedly unimpressive production is said to be lost, with no surviving prints, and even still pictures are elusive. The only photo I’ve ever seen is one of the gas gun made for the production, which is a ringer for the one on the cover of the Dell comic. Could that one-shot also have been a back-door attempt to sell sponsors on a series, or other Green Hornet projects?
At one point Trendle had contacted Universal Studios, inquiring if perhaps episodes of the movie serials could be cut together to form an inexpensive  TV series, presumably as a sort of  trial run for a new program. This did not come to pass, either.
It would not be until the mid-1960’s that the Green Hornet would make the jump to television. When it did, a new take on an old character would change the balance of the Green Hornet and Kato team—probably forever.