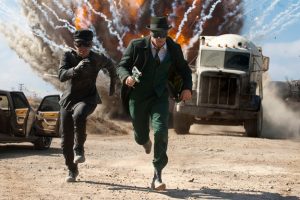 Sony/Columbia has released their first Ofiicial Photos from THE GREEN HORNET.
In the first one here, we see Kato (Jay Chou) and The Green Hornet (Seth Rogen) as they battle a group of villains at a construction site.
The Hornet is carrying the film’s new version of the crimefighter’s famous gas gun.
The first trailer for the film is scheduled to air tonight on ABC’s Jimmy Kimmel Live, where Seth Rogen will be a guest, and it will become available online tomorrow.

In the other picture released, we see an unmasked Britt Reid and Kato, who seems to be wielding a conventional automatic. 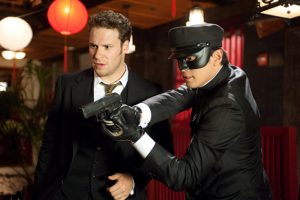