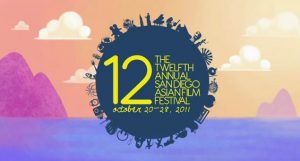 It’s that time of the year again, and if you’re a fan of Asian films like I am, then that eclectic far out martial skill called the 10,000 bee technique should not be bugging you but alarming you to the magnetic, electric and eccentric buzz of Fant-Asia movies that will haze, pseudo-faze and amaze you at this years 12th Annual San Diego Asian Film Festival (SDAFF), which eeks and freaks within a whopping 9-days from October 20-28, 2011 in San Diego, California.
Many of you may have recently seen Japanese director Takashi Miike’s chambara tour de force 13 ASSASSINS, so what better way to get the old Fant-Asia rice ball rolling than featuring Miike’s magical marvel that steps deeper into the realm of the deadly, blood, squirt and gore of samurai sickness that shall put his 13 ASSASSINS and HARA-KIRI: DEATH OF A SAMURAI films to shame with NINJA KIDS!!!
Well maybe not to shame. 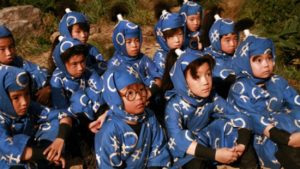 Based on the anime series NINTAMA RANTARO (which was adapted from the long-running manga title Ranudai Ninja Rantaro), NINJA KIDS!!! is more of a Harry Potter attending Ninjaworts, where the wand is replaced with swords, shurikens and other secret assassinette things one can’t begin to imagine as ninja schools get insanely warped into a feud that will make your mouth drop lower than anything you’ve seen in a TOM & JERRY cartoon.
Lee Ann Kim, a first generation Korean American, executive director, and the fearless leaders of the San Diego Film Foundation, which she founded in 2000 with the Asian American Journalists Association of San Diego, laughingly shares with cinefantastiqueonline.com, “It’s not so much full on martial arts as it is a caricature of martial arts. There’s creepy characters and lots of good fun. It’s supposed to be for the 12-16 year old audience, but my staff totally loved it.”
Once again, the SDAFF shows that the festival is much more than just a conglomeration of Asian-themed films, it is indeed a social phenomenon geared toward giving non-Asians a more well rounded taste of Asian filmmaking as well as to create a symbol of unity, a way to bring together the many different Asian American ethnicities, who don’t see themselves as a single entity compared to the African American and Hispanic communities, not only in San Diego, but nationwide as a whole.
Kim adds, “The film festival, it is an awesome way to bring people of all different background together, Asian and non-Asian and we do so by bringing in films that are of top-notch quality, different, diverse, and well rounded. 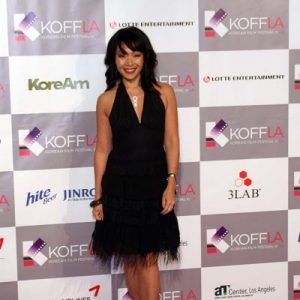 “With this year’s program, it’s one day longer than last year, we have 160 films from 21 countries, 60 features, 100 short films, 9 short film programs, and over all about 80 programs. I feel like our programming this year is more challenging as we’re showing more critically acclaimed films from filmmakers we’ve never shown before and film presentations that bring communities together. One of our Spotlight on Japan program films that really is about bringing the communities (USA and Japan) together is THE POWER OF TWO, which is about cystic fibrosis.”
FREEZE. WHAT? Kim notices my eye pop out like something out of an old style Sonny Chiba film. The words cystic fibrosis had stunned me onto a different plane…and I’m not talking about an F-14. So why was I stunned more than a phaser attack?
Well, when I was 16, my doctor told me that I would be dead in five years due to the deadly effects of cystic fibrosis, the number one genetic killer disease in the world that affects the lung and/or pancreas. When one has the disease in both, life expectancy is even lower. I have it in both. So at the time, I was taking 30 pills/day, undergoing up to two hours of painful therapy a day and in the hospital every three months.
In the late 1970s, and my last ditch effort to avoid death, I moved to the Republic of China (now Taiwan) and by becoming a stuntman in Chinese kung fu films, I met a man that taught me the then little known art of Qigong. Five months after learning Qigong and to this day, I’ve been off all medications and therapies since. To demonstrate my lungs were truly strong, and my digestive tract could take the strain, in 1986, I walked 3000.2 miles (marathon/day for 115 days at a 4.3 mph pace).
Kim’s eyes now pop out responding, “Oh no, wow, I didn’t know. I also didn’t know anything about CF until I watched this film. It’s about twin sisters that are half Japanese and their mission is to build awareness of CF but also to encourage Asians to become organ donors, because culturally Asian people tend not to do. This is a film that I personally championed because it is not a film festival film, but for us it is because it is a rare opportunity, to shed light on this disease, but also from a positive social angle to encourage discourse within a community that would not have learned about this stuff otherwise.
“The movies shows that in Japan there is just such an extraordinary waiting list of people waiting for organs and there is nobody donating, nobody. And so that in itself to me was valuable, just as valuable as the whole film itself.”
Talk about a breath of fresh air.

However, here’s a few movies that will take your breath away, two wild and wacky films that are part of SDAFF’s 3rd Anniversary of their much coveted and coverted Extreme Cinema program that will slide and glide with blood and guts that merely adds to the growing notoriety of the West Coast’s now numero uno Asian Film Festival.
Sci-fi, hi-fi and die-fi blood clot together with some “for real” deadly, blood, squirt and gore with YAKUZA WEAPON where ex-yakuza Shozo Iwaki (Tak Sakaguchi) armed with a machine gun arm and a rocket launcher leg, is on a path of vengeance and a sanguinary rematch with his arch nemesis Kurawaki, who also recruits Shozo’s best friend Tetsuo to join in the battle to kill Shozo. With shades of TOKYO GORE POLICE, to make matters worse Tetsuo’s younger sister has been transformed into a naked weapon armed with the same technology as himself, that brings a whole new meaning to the words necking and drop dead gorgeous.
And speaking of drop dead gorgeous, beware when you’re in Japan and enter a tropical fish store named Amazon Gold and see a beautiful attendant luring you inside. The demure innocence will hide the true decadence of the fish connoisseur as the heat of COLD FISH is not about up carving Osteichthyes bony fish into sashimi but slicing and dicing Mammalia primate humans into compost as the heap of bodies pile up in the film based on a true story. For some reason, it kind of reminds of the Anthony Wong starring UNTOLD STORY (1993), that gruesome Hong Kong category III film about the making and selling of human flesh buns.

On a lighter but warped side of things, time warp that is, there’s A BOY AND HIS SAMURAI, which seems to be influenced by yet another Hong Kong Fant-Asia film, A TERRA-COTTA WARRIOR (1990) about a terracotta warrior from 3000 year ago who wakes up in 1930 China. Based on the popular manga of the same name, BOY AND HIS SAMURAI stars TV heartthrob Ryo Nishikido as samurai warrior Kijima Yasube caught in a time warp who time travels from the Edo Period and arrives 180 years later in present day Japan, meets the divorced Hiroko, her son Tomoya and then begins a wild and wooley journey that has him going from being a housemaid to becoming a popular patissier (pastry maker). To wrap this story tighter than a croissant, it’s a yarn about a lad, time warps, giant cake castles and a whisk-armed samurai chef vs. yakuza.
On the ultra lighter side of things comes the South Korean HELLO GHOST, where after several failed suicide attempts, a young man finds new purpose in life through four hilarious ghosts. Thailand’s contribution to the light emerges from their quiet ghostly jungles as ETERNITY reveals that the purest love transcends death.
And what Asian film festival that features Fant-Asia film would be complete if they didn’t feature at least one anime movie. So this year’s flick that flies into the foyer of the cel and hell is FULLMETAL ALCHEMIST: THE SCARED STAR OF MILOS. It’s the 2nd film from the popular anime series in which the Elric Brothers get involved in the rebellion of he Milos people. Book ending the anime is the more quassi-traditional cartoon program, the highly popular ANIMATION: THE ILLUSION OF LIFE, where the magic of animation comes alive in this collection of short films. 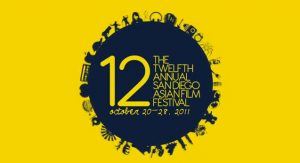 For information in regard to the films, dates, time, cool stuff about the SDAFF and how to get to the Ultrastar Cinemas Mission Valley Hazard Center, please visit www.sdaff.org.  Also, if you’re up for an insanely amazing experience in health, there will an interactive Qi Healing booth that will be offering free Qi Reading, Pull Out the Pain demonstrations and a Feng Shui reading that will tell you if you’re afraid to earn lots of money or not.
Kim closes with a few final words. “It seems that the theme for this year’s festival is one of love. But the main cause of this year’s festival is Japan. During our spring showcase we raised $15,000.00 toward recovery efforts. We’re not actively raising money but actively keeping Japan in our minds. It’s so far away and what the people in Japan really need is beyond dollars. It will take decades of hard work to rebuild the community and we want to make sure that people in their own way can give back. Japan has a huge cinema industry, which has been semi-devastated because of what happened over there. With we’re trying to keep the film community alive in Japan and that’s important to us”