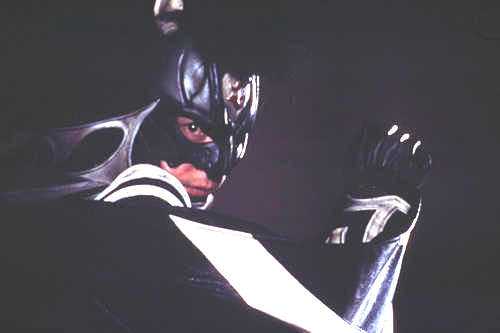 The plot couldn’t be simpler: An average shlub named Shinichi (Sho Aikawa) sews himself up a TV superhero uniform and discovers that, once garbed and despite a few stumbles along the way, he has capacities beyond what he ever imagined. It’s THE GREATEST JAPANESE HERO, but with an uncommon sense of yearning to its telling. The protagonist is a schoolteacher, cuckolded by his wife and an embarrassment to his slutty daughter and young son. The superhero he picks is not from a hit henshinshow, but an obscure and patently ludicrous crimefighter whose decades-old series didn’t finish out its first season. That he becomes a positive force in the lives of a disabled boy named Asano (Naoki Yasukouchi) and his earnest mother Kana (Kyoka Suzuki), and restores a sense of purpose to a hard-bitten secret agent (Atsuro Watabe) could be considered par for this particular course, unless one takes into account the society that the tale is being played out within. In a world where conformity and cooperation is emphasized, what happens to the lone soul who wishes to exert his individuality, who wants to matter? ZEBRAMAN brings an engaging piquancy to the question, and rises above its conventions as a result.

This isn’t weighty stuff. As with KATAKURIS, the production favors tacky charm over gory reality (one of the funnier moments offers up a TV show that plays like a cross-pollination between MASKED RIDER and RINGU). And it’s essentially a boys’ night out – within his family, Shinichi deigns only to reach out to his son during his growth into herodom, while Kana matters only so much as she’s the mother of Asano, and can function as a sort of tacit, and completely chaste, love interest. Getting the women more deeply involved would’ve added a bit of kick to the proceedings (what if the daughter discovered she was seeking more out of life than the chance to lie down with middle-aged businessmen?), but Miike seems more comfortable keeping these characters as satirical constructs. Fortunately, that doesn’t come anywhere near to seriously derailing the fun. ZEBRAMAN takes a crazy, campy look at a campy, crazy genre, and discovers the hopeful heart that beats within.
ZEBRAMAN (Media Blasters; 115 mins.) Directed by Takashi Miike. Cast: Sho Aikawa, Atsuro Watabe, Naoki Yasukouchi, Kyoka Suzuki.