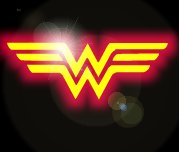 Sci-Fi Wire reports from the Sci-Fi Awards that X-MEN producer Lauren Shuler Donner would like to produce a Wonder Woman feature.

“I’m campaigning to produce Wonder Woman for DC and Warners. They don’t want it, but I just think she’s the greatest character. She’s right up there, as you know, with Superman and Batman, the three of them…
Look, she’s a goddess and a superhero. How great is that? I think you need to stay close to the myth, but the studio I know wants to make it accessible, i.e., somewhat contemporary. I think there is a way to do it.”

A number of Hollywood talents have tired to come up with a script and for Dc’s biggest female hero that Warner Bros. would greenlight.
Joss Wedon (BUFFY THE VAMPIRE SLAYER) may have come closest, for producer Joel Sliver—but ultimately, the studio passed on the project.
It’s hard to judge how much interest there is for a stand-alone Wonder Woman film, both by fans and the studio.
Warners was all set to go with the character as part of the ill-fated Justice League movie, but there may be some skepticism that Princess Diana can support a tent-pole feature on her own.