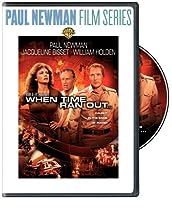 After Paul Newman’s death last September, someone at Warner Bros decided to comb through their catalog and release any remaining Newman films that they owned the rights to. Unfortunately, their previous box set, The Paul Newman Collection, managed to skim most of the cream off the top with titles like Harper, The Young Philadelphians, and Somebody Up There Likes Me, leaving the brothers Warner with a quintet of all-but forgotten films that the studio hasn’t even bothered to gather in a box set. Christened with a “Paul Newman Film Series” banner across the packaging, we get the stilted The Helen Morgan Story in which Newman has only an uncomfortable supporting role, the gorgeous-looking but dramatically inert The Silver Chalice, and Martin Ritt’s Rashomon remake set in the old west, The Outrage, featuring Newman stretching nearly past believability as a Mexican bandito. The best film of the bunch, Rachel, Rachel is actually a showcase for Joanne Woodward that was only directed by Newman, leaving us with a film that Newman himself has derided as one of the few that he actually regrets making (and made only a year after the determinedly unwatchable Quintet), Irwin Allen’s When Time Ran Out. Although made in 1980 – long after the golden age of the disaster film peaked with The Towering Inferno in 1974 – WTRO looks like a much older film; as the language of cinema grew up around him, producer Allen was still stuck in the ’60s, with flat lighting, sets, and effects that wouldn’t seem out of place on an episode of Time Tunnel.
Newman plays an oil wildcatter in partnership with a fittingly oily businessman (James Franciscus) to develop the resources of an unnamed pacific island. Thrown into the mix are wealthy hotelier William Holden (appearing distressingly frail), a retired high wire performer (Burgess Meredith, and no points for guessing how this particular plot string plays out), and our own favorite subplot, soon-to-retire cop Ernest Borgnine on a 24/7 round the world quest to ensure that white-collar criminal Red Buttons doesn’t enjoy spending any of the money he’s suspected of swindling. As Holden’s hotel fills with tourists, the island’s volcano begins to rumble, and in spite of Newman’s warnings (and the inference that island local Pat Morita runs an underground cockfighting ring) the tourists remain, and wind up right in the path of the deadly lava meteors (trust me, they’re coming).
Newman was contractually obligated to a second Allen picture after Inferno, but there’s no excuse for the way he sleepwalks through the show (critics love to disparage Franciscus, but at least he’s got a pulse in these pictures). The skeleton of a script by sometime Allen lapdog Sterling Silliphant and Carl (“how do I get blacklisted again?”) Foreman is mostly assembled from the bones of earlier and better Irwin Allen extravaganzas. All that separates the hijacking of Newman’s helicopter from the breaches buoy scene from Inferno is the absence of a scotch-infused Richard Chamberlain, and Red Buttons even demonstrates his icky power walking routine, last seen on the decks of the Poseidon.
While no one expects deft character development in a disaster film, it is somewhat breathtaking to see Burgess Meredith’s character go into powersave mode until his high-wire prowess is needed to help ferry children across a lava flow – a sequence utterly devoid of suspense that stretches on for an eternity. In what many would consider an act of mercy, Warner Bros has issued the shorter theatrical version (listing into port at 109 minutes) even though the extended cut was long ago made available on VHS.
WTRO blazes new ground in the bare bones release department – no special features, no chapter selections, not even a trailer. The only choice on the main menu screen other than “Play Movie” is “Languages”, from which you can choose only “English”. And yet, even after all that, we still have a weird admiration for the brazen awfulness of WTRO; certain disaster pictures, like Inferno and Poseidon, are legitimately good films, where production values and star wattage make up for other –ahem – inconsistencies. But others like Allen’s own The Swarm, and Jennings Lang’s Allen-wannabe epic Earthquake, are so brazen in their badness, so sublime in their silliness, that they create a critic-proof wall of camp satisfaction around themselves. Anyone who looks back fondly on the massive performance of Marjoe Gortner in Earthquake will know what we’re talking about. All others keep a safe distance.