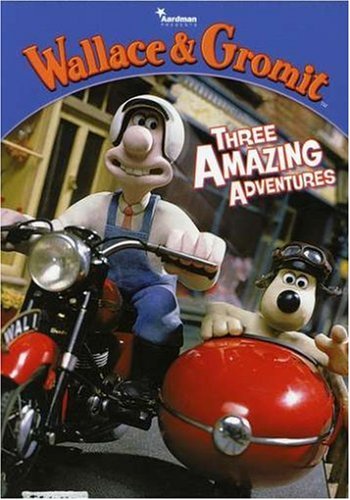 Before starring in their first feature film, plasticine pals Wallace and Gromit shot to stop-motion stardom in three short subjects: A GRAND DAY OUT, THE WRONG TROUSERS, and A CLOSE SHAVE. Produced by Aardman Animations (which also produced the Oscar-winning animated short CREATURE COMFORTS, plus numerous stop-motion commercials, including the Serta Sheep and the Chevron cars), all three Wallace and Gromit films were nominated for Academy Awards in the best animated short subject category; the later two won the award. The characters then went on to star in a series of two-minute vignettes shot for the Internet, called “Cracking Contraptions.”
Created by animator Nick Park, the characters are a perfect comedy team: Wallace is a slightly daft inventor who loves cheese and seems oblivious to the fact that his dog Gromit (who does not speak) is the real brains of the operation. Molded from plasticine (a play-dough-like substance), the characters have a quirky expressiveness not often seen in stop-motion.

A GRAND DAY OUT

The debut film of Wallace and Gromit is cut and amusing, establishing the characters and showing off several hilarious sight gags. In retrospect, the film is entertaining but not as impressive as its successors: the storytelling is fairly basic, and the filming technique has a slightly rough, almost crudely home-made feel (the character design on Wallace is noticeably different).
The story (not really a plot, per se) sees Wallace haivng difficulty deciding what to do with his free time on a bank holiday. Running out of cheese, he hits on the idea of a trip to the moon, because everyone knows the moon is made of cheese. After building a rocket in his basement, he and Gromit blast off to the lunar surface, where they chew on some moon rocks and run afoul of a derelict robot.
The film doesn’t really have any plot complications; the story simply proceeds from one scene to the next in a linear fashion, stringing together the visual jokes (such as a group of mice in the basement simultaneously donning sunglasses to watch the rocket’s blast-off). Because of this, the film doesn’t build to a climax; it simply moves along. But, like an old-fashoned silent movie comedy, the laughs are more than enough to sustain the short running time.

THE WRONG TROUSERS takes Wallace and Gromit and places them within a mystery-thriller scenario. The effect is parody, but like the best parody, this humor derives from the fact that what we are watching is in many way indistinguishable from the real thing. Ignore for a moment that what we are watching are lumps of clay. The technique employed (camera placement and movement, editing, and lighting) are as carefully employed as in any live-action film.
The story begins with a disarmingly amusing episode regarding Gromit’s birthday, which he thinks Wallace has forgotten. The tone shifts in a subtle way, however, when they take in a border: an obsequious penguin, who soon seems to be taking Gromit’s place as Wallace’s best friend. The situation is ripe for comedy, which director-animator Nick Park exploits fully, but along the way we gradually find that the mysterious penguin has a hidden agenda: to wit, heisting a diamond with the aid of Gromit’s birthday present (“Techno Trousers…ex-NASA…fantastic for walkies.”)
Everything about this film is perfect, from the broad comic strokes to the subtle nuances of the characters’ expressions. Even elements which could have been weaknesses are turned around into strengths. For instance, the silent penguin (only Wallace speaks) has virtually no expressive capabilities except for his blinking eyes, but this only adds to his enigmatic nature, as the Bernard Hermanesquescore underlines every gesture with menace. The film is filled with so much detail and cleverness that multiple viewings are almost essential. Park pulls some effective cinematic “cheats,” such as having Wallace back into an empty doorway, then stepping aside to reveal the penguin, who has suddenly appeared out of nowhere. The effectiveness of the character’s surprise appearance is only augmented by seeing how Park pulled a fast one on us.
Make no mistake: this film is a humorous takeoff on the theme, but Park is confident enough in his abilities to go for an extended visual sequences of the jewel heist, with only minor comic touches. This is so well-done that, on first viewing, one would assume it to be the highlight of the film. Then Park audaciously tops it with the climactic model train chase — quite an impressive coup. Like many great set pieces (the train chase in Hitchcock’s NUMBER 17 comes to mind), this later scene is barely justified by the story. (Gromit could have simply conked the villain on the head with his rolling pin, but in a delicious absurd sight gag the penguin pulls out a gun. Where the hell was this suitless penguin packing a rod?) But the visual impact of the scene is so great that it truly justifies its own existence.
This may sound a tad heavy-handed, yet THE WRONG TROUSERS is good exuberant fun. The storytelling is brisk enough to hold the attention of youngsters, but most of the references and inside jokes are clearly intended for an older audience. In its own way, despite the claymation which would seem to indicate a kiddie format, this is an ambitious undertaking which uses the cinematic form to its fullest extent. Shot for shot there is more style here than in a dozen live-action features — style that is enjoyable both for its own sake and for effectively enhancing the story telling.

The third Wallace and Gromit film builds upon the success of THE WRONG TROUSERS, crafting another action-packed, Hitchcockian thriller. It’s not as big an advance as THE WRONG TROUSERS was over A GRAND DAY OUT; in fact, in some ways it seems a repetition of the formula established in the previous film. And yet it manages to top its predecessor with a series of even more impressively staged sight gags and action sequences.
The film starts with a sheep escaping from the back of a truck and wandering into the home of Wallace and Gromit, who name him Sean after he is shorn of his wool in Wallace’s newest invention, the Knit-O-Matic. The next day, Wallace and Gromit are summoned to wash the windows of Wendolyne, who owns a menacing pet dog named Preston. The window-washing job turns out to be a ruse, as Preston takes advantage of Wallace and Gromit’s absence from home, sneaking into their basement in search of Sean. It turns out that Preston and Wendolyne (reluctantly, on her part) have been rustling sheep. Gromit is framed for the crime and sent to prison, but Wallace and the grateful sheep help him escape, which leads to a madcap chase (including Gromit flying in a motorcycle side car that sprouts wings) followed by the final-reel revelation that Preston is a TERMINATOR-type cyberdog.
With Sean the sheep undermining the tranquilty of Wallace and Gromit’s happy home, A CLOSE SHAVE at first seems to resemble WRONG TROUSERS too closely, but the film soon takes some interesting turns, introducing Preston as the villain and showing Wendolyne as his unwilling accomplice. The presence of another human character provides the first opportunity for dialogue in the series, and the blooming romance between Wallace and Wendolyne generates some good verbal humor to counterbalance the sight gags (sadly, it all comes crashing to a stop when Wallace discovers she doesn’t like cheese).
The highlight includes a chase scene that tops the train sequence in WRONG TROUSERS. This time we get a motorcycle pursuing a truck down a darkened road at night — which might not have been so funny if it weren’t for the dozen sheep balanced atop the cycle, forming Busby Berkely-like patterns in order to keep their balance and fit through tunnels.
Although some may prefer WRONG TROUSERS, A CLOSE SHAVE is probably the best of the three films. If there is a flaw, it is that the film sometimes seems like a “frustrated feature” (to use Nick Park’s words), as if the story could have easily been expanded to provide more nuance and subtety, more of the little asides that make Wallace and Gromit so amusing. Even so, if the condensed nature of the story leaves viewers wanting more, it also creates an almost breathlessly paced film that, like WRONG TROUSERS, works almost as well as any straight live-action thriller.

The three Wallace and Gormit shorts have been packaged together on videotape, laserdisc, and DVD. DVD releases include WALLACE AND GROMIT: THREE AMAZING ADVENTURES, WALLACE AND GROMIT: THE FIRST THREE ADVENTURES, and THE INCREDIBLE ADVENTURES OF WALLACE AND GROMIT. The DVD tirled WALLACE AND GROMIT IN THREE AMAZING ADVENTURES also includes the “Cracking Contraptions” episodes. These simple vignettes, running a couple minutes each, are based around Wallace’s ridiculous inventions. For instance, “Soccanatic” shows the two stop-motion stars getting a little exerciseon the soccer field. When Wallace grows tired of practise, he rolls out his mechanical soccamtic (“All the goals, none of the fuss”). Like an old-fasihoned comedy black-out, they play out like dramatized jokes: set up the joke and spring the punchline. Not as impressive as the ambitious storytelling of the later two Oscar-winning films, but still amusing.
CREDITS: A Grand Day Out (1989, 24 mins). Written & Directed by Nick Park. The Wrong Trousers (1993, 30 mins)’ Directed by Nick Park. Written by Park & Bob Baker. A Close Shave (1995, 30 mins). Directed by Nick Park. Written by Park & Bob Baker. Voice of Wallace: Peter Sallis