9 X 9: When Andrew Stanton first joined Pixar he was only the fledgling company’s ninth employee. Now, 18 years on, Stanton has delivered us Pixar’s ninth movie, WALL•E (Short for: Waste Allocation Load Lifter•Earth-Class.) Not so surprisingly, given Pixar’s track record, WALL•E is already being hailed as another animation “masterpiece.”
Below the fold are some of Andrew Stanton’s thoughts on the film (provided by Disney’s head of communications, Howard E. Green), which I have combined with an interview I conducted with Stanton at the time MONSTERS, INC. was first released.
QUESTION: The original idea for WALL•E came about at a Pixar lunch meeting way back in 1994, before TOY STORY was even released. What was the concept like then?

ANDREW STANTON: One of the things I remember coming out of (the meeting) was the idea of a little robot left on Earth. We had no story. It was sort of this Robinson Crusoe kind of little character—like, what if mankind had to leave Earth and somebody forgot to turn the last robot off, and he didn’t know he could stop doing what he’s doing? I started to just think of him doing his job every day and compacting trash that was left on Earth and it just really got me thinking about what if the most human thing left in the universe was a machine? That really was the spark. It has had a long journey. I then became fascinated with the loneliness that this situation evoked and the immediate empathy that you had for this character. We spend most of our time on films trying to make our main characters likeable so that you want to follow them and root for them. I started thinking, ‘Well, where do I go with a character like this?’ And it didn’t take long to realize that the opposite of loneliness is love or being with somebody. I was immediately hooked and seduced by the idea of a machine falling in love with another machine. And especially with the backdrop of a universe that has lost the understanding of the point of living. To me, that seemed so poetic. I loved the idea of humanity getting a second chance because of this one little guy who falls in love. I’m a hopeless romantic in cynic’s clothing. This movie gave me a chance to indulge in that romantic side a little more than I normally would in public.
QUESTION: The first half of the movie is completely without dialogue.
ANDREW STANTON: We felt we could do it with non-traditional dialogue, maintaining the integrity of the character. In real life, when characters can’t speak—a baby or a pet—people tend to infer their own emotional beliefs onto them: ‘I think it’s sad,’ ‘She likes me.’ It’s very engaging for an audience. We also wanted the audience to believe they were witnessing a machine that has come to life. The more they believe it’s a machine, the more appealing the story becomes.
QUESTION:The animators must have loved working on the film. 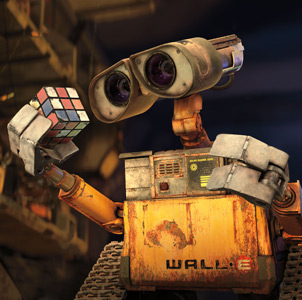 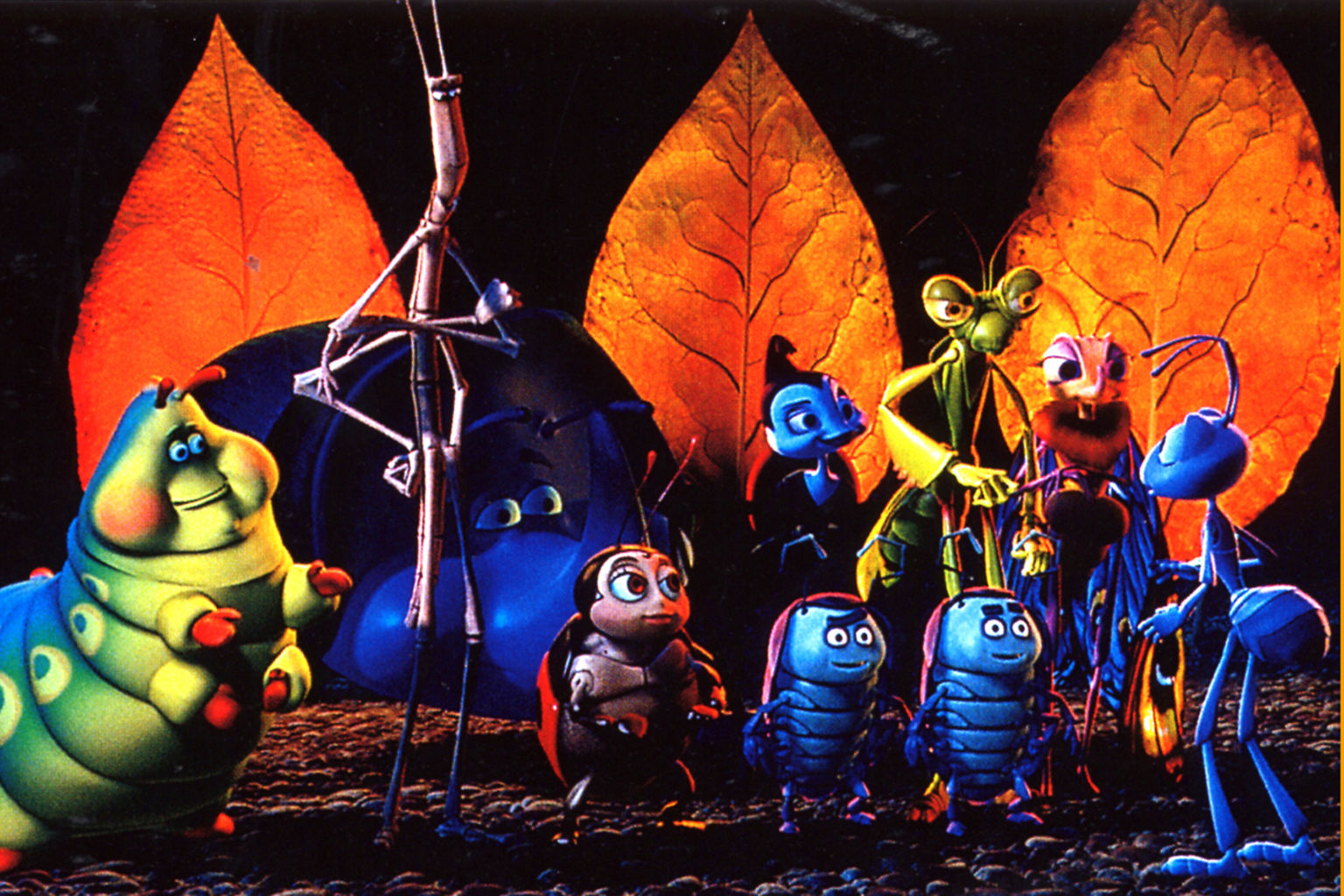 I actually enjoyed it, because I find the back end of a movie really only needs your physical presence, but the part of you that’s always thinking up ideas is kind of shut off. So I was kind of raring to go. I was actually over at Skywalker sound for weeks doing the sound mix on A BUG’S LIFE and they found this little room for me to work in, right upstairs next to the projector, so there was this big loud projection noise, and I was in the room next door typing away, coming up with scenes. It was kind of nice, because I don’t usually get a concentrated three or four weeks like that, of just being able to just focus on one thing. I’m sure most writers get that, but it was a real luxury for me. It really allowed me to give most of the foundation to what MONSTERS, INC. became. And once I had that, I knew it would evolve even further, because everything we do here evolves, so I never expected it to be the be all, or the end all. I’ve never written anything that I felt was that, and Dan Gerson was the guy who came in after I left and keep running with it. I felt really good with what I came up with. I named the little girl, Boo, and developed Sulley and Mike’s relationship, and worked with the way the MONSTERS, INC. world worked—the whole idea of children’s screams powering the Monster world and the whole caper aspect of it. In the Himalayas, with the Yeti, those were all fundamental ideas that weren’t there, that I had fun bringing to it. Then I spent the rest of my time playing executive producer for the back half of it. Because we had TOY STORY 2 going, and I was about to start work on FINDING NEMO.
LAWRENCE FRENCH: One thing that has become a trademark of Pixar films, is the careful analysis you give to the story. You’re dealing with fantasy worlds, but you always seem to give those worlds a strong foundation in logic.
ANDREW STANTON: Part of that is because we have the time to get it right; it takes us years to make a movie. But also, a lot of that I learned from John (Lasseter). It really bug’s him when something doesn’t make sense. Not so much that you have to have logic, just for logic’s sake, but more that he doesn’t like the opposite, he doesn’t like to be thrown out of a movie because something doesn’t make sense. All John wants is to be caught up in that movie for 90 minutes, and for John logic plays a huge role in whether or not you’re going to be in or out of the movie. Sometimes logic can be your worst enemy, if you’re spending so much time trying to explain something. A lot of times, we will throw out a whole idea, just so you’re not thinking about the logic, because we certainly know the holes in our films, even if nobody else does. The big driving thing though, is if you can make it work, wouldn’t that help? Especially when you get into fantasy. 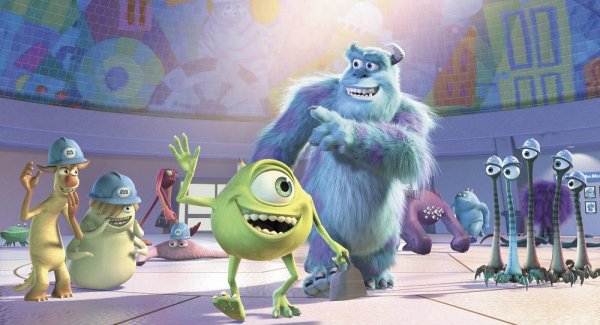 So there was a much tougher role for logic when we did A BUG’S LIFE, that compounded when we went into MONSTERS, INC. I think the more you go into magic, or made-up worlds, you have to have rules, or else anything can happen. You have to adhere to them, and structure them in a way that are very clear in the movie. So once we came up with the reason why the monsters scare kids — because they need their screams, and that’s their fossil fuel, then it became fun to figure out the way they would go about doing that, and how it would all work. And that all shows in the factory, down to the minutest details — how everything is put there, and how their day would run. It gives them that kind of Flintstone world, where part of the entertainment is seeing how the world actually works. We wouldn’t take every movie to the same degree we do in MONSTERS, INC., but I think this film really called for it. It’s part of the appeal. In their apartments they have double doors, one smaller door, within the bigger door, so if you’re a smaller monster you can adjust. So logic is a big thing with us.

One Reply to “WALL•E: An interview with Pixar's Andrew Stanton”