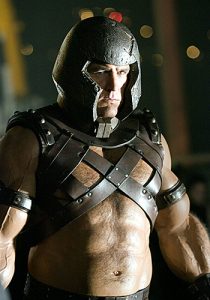 The Hollywood Reporter revealed that Vinnie Jones
(X-MEN: LAST STAND) has joined the cast of NBC’s
THE CAPE as a regular.
Jones will play a freakish criminal named ‘Scales’ on the series, a man with a skin condition that looks like green and gold scales.
A snake-man? A Killer Croc clone?
Guess we’ll have to tune in to find out.
Vinnie Jones joins a cast that includes stars David Lyons (ER), Summer Glau (FIREFLY) along with Keith David (SPAWN) and James Frain (INVASION).
The series is produced by Gail Berman (BUFFY THE VAMPIRE SLAYER [TV]), Lloyd Braun (VIRTUALITY), and Tom Wheeler (EMPIRE) for Universal Media Studios.