Oh no, they say she’s got to go, go go gorezilla. On no, there goes Tokyo, go go gorezilla…zilla…zilla…zilla.
Although director Yoshihiro Nishimura’s TOKYO GORE POLICE, essentially a remake of his earlier film ANATOMIA EXSTINCTION (1985), does not have any men running around in rubber monster suits, it does have men and women looming around covered in latex prosthetics that are as nutty as they are creative.
“Blood, squirt, artery, homicide, gore.” These are the words pouring out of the mouth of Michael Palin during his rendition of a sadistic barber in a Monty Python skit. It also happens to be a fair description of TOKYO GORE POLICE (2008), Nishimura’s over-the-top blood lusting freak-out film that gives this Gore-Asia genre a comedic lilt with a horror tilt.
With last year’s successful U.S. Film Festival run of Nishimura’s co-directed Gore-Asia release of VAMPIRE GIRL VS FRANKENSTEIN GIRL (2009), Tokyo Shock’s May 18, 2010 re-release of TOKYO GORE POLICE is yet one more strategy to drain our very souls – and pocketbooks – dry. The two-disc set is touted as a “1.5 version” that includes a bonus disc of follow-up short films, which is intended to “extend the TOKYO GORE POLICE cinematic experience.”
However, I think that those who have seen any of the other released versions of the 109-minute twisted TOKYO GORE POLICE (such as the single-disc DVD released in January 2009) will agree that any additions (barring unseen footage or extended play) are as needed as an extra hour on Peter Jackson’s KING KONG (2005), a film that would have greatly benefited by removing about 40 minutes of the first hour.
Anyhow, for those who came in late, the thousands of gallons of blood gushing out all over the screen, on the camera lenses and the various slice ‘em and dice ‘em up actors are the result of a futuristic gore war between Tokyo’s newly created privatized police force versus the Engineers. Not to be confused with someone who drives a train or builds cars, these Engineers are a sometimes randy, rowdy or raunchy bunch of genetically created mutant murderers who when maimed morph into maniacal machinations of maliciousness.
Enter the Ruka (Eihi Shiina; the piano-wire wielder in AUDITION (1999)), Engineer hunter extraordinaire, whose goal is to find and finish off the head Engineer (Itsuji Itao), in order to railroad and derail his dreams of humankind domination. But the “key” to unlock her success goes beyond the door of damnation to reveal the reality of what and who she is. 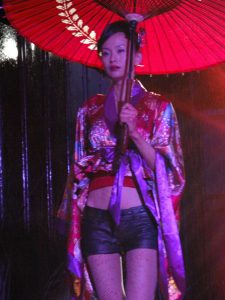 As many Japanese, female driven action-gore films depict, Ruka wields a samurai sword.  However, the film only contains six hack-and-whack fight scenes cumulatively lasting a poultry four minutes, which reflect action scenes featured in the Meiko Kaji starring LADY SNOWBLOOD  films (1973 & 1974) and the FX influenced fight scene between Yuen Biao and the freaky creature in PEACOCK KING (1989). In a very obscure fashion, Ruka acts, dresses and looks a little like Beatrice Chia’s Silver character featured in the Hong Kong actioner short LOST TIME (2003).
Nishimura’s scatological sensibilities border on pee-thetic bathroom humor that are not just a bunch of croc but are influenced by Shintaro Katzu’s HANZO THE RAZOR films (1972, 1973 and 1974), which probably breaks every penile code this side of the Pecos.  In this case, the words of Eric Idle from another Monty Python sketch will suffice, “Wink, wink, grin, grin, blink, blink. Know what I mean? Say no more.”
[serialposts]