If you are expecting an exciting, tongue-in-cheek thrill ride with gallons of ridiculous gore, you are one-fourth right. 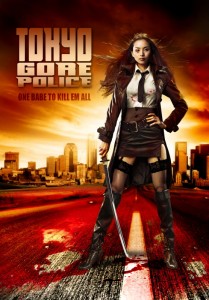 If you sit down to watch a film called Tokyo Gore Police, you certainly have no one to blame but yourself, right? It’s not as if you had no idea what you were in for. Or maybe you didn’t. You could have been expecting an exciting, tongue-in-cheek thrill ride with gallons of ridiculous gore. In which case, you were one-fourth right. Although blood flows freely, excitement and thrills are in short supply; as for the tongue, it’s been ripped from the cheek and tossed out the window.
The story, such as it is, follows Ruka (Eihi Shiina), who is your standard-issue tough but troubled ass-kicking hot chick. She’s part of an elite police unit that handles a new kind of criminal, who sprout weaponry from wounds inflicted upon them. (And you thought Hercules had it bad with the Hydra!)
Before delving any deeper into Tokyo Gore Police, I should pause to acknowledge that, if you are interested in seeing it, you probably don’t care about any plot deficiencies I may be about to enumerate. Which is fine by me: nonsense cinema can be fun.
However, there is a more fundamental problem, which supersedes narrative coherence: there’s really nothing Ruka does which comes close to justifying the high regard in which she is held by the other characters (and, indeed, by the film itself). It’s not as if there is anything about her skill with a sword to convince us that she could succeed where an armed squad of other police would fail. Sure, she kills all the mutant criminals, but that happens pretty much because the script says so.
The story follows Ruka’s quest to find the “Key Man,” who created the virus that turns criminals into “engineers” capable of transforming. He turns out to be one of those villains with a righteous cause, regardless of his methods. And considering the brutality of Ruka’s comrades (who are ruthlessly cracking down on everyone suspected of being an engineer), you can hardly blame the Key Man for hating the police (though he has a more specific reason as well).
His motivation ties in with Ruka’s decision to join the police, which stems from a childhood memory of seeing her father (also a policeman) murdered. Since then, she has been raised by her father’s colleague, who is also now the police chief and, hence, Ruka’s boss. Anyone want to take early bets on whether the chief turns out to have been involved in dad’s murder? No? Good, I figured you were too smart to fall for sucker action like that.
Eventually, Ruka gets infected, which turns out to be a good thing, because she can mutate a cool new arm and eye and turn the tables on her former colleagues after finding out that her dad was murdered precisely because he resisted police force privatization – though, to be frank, it’s not as if the film generates any real rooting interest in this regard.
Too a large extent, none of this matters, because the appeal of Tokyo Gore Police is based upon the weird mutations it can visualize for Ruka to slice to pieces. Strangely, as excessive as it it, Tokyo Gore Police falls short in this area, at least by its own standards, with certain effects – or at least types of effects – repeated. Make no mistakes: there is an abattoir full of mutant, mangled flesh on view, but after awhile it seems as if the writers ran of out ways for Ruka to dispatch the engineers.
The one small saving grace is that the film mimics the satirical tone of the original Robocop. Set in a vaguely fascist future, Tokyo Gore Police is sprinkled with TV adverts and public service announcements that are often morbidly funny (topics range from suicide to trendy wrist-cutting self-inflicted by happy teenage schoolgirls). Unfortunately, these scenes add up to approximately three minutes of the overlong 110-minute running time; you’re better of watching them on YouTube.
Center stage in all this is the “Tokyo Gore Police” (actually identified as the “Tokyo Police Corporation” in the film), whose ads show them mercilessly gunning down miscreants while jovially announcing to the camera, “We will protect you!” This is followed by a voice over extolling the virtues of privatizing the police force. The satirical emulation of mindless propaganda is as cutting as anything in Starship Troopers.
Sadly, Tokyo Gore Police has neither the resources nor the inclination to infuse this satire into the main body of the film, which thus fails to live up to its own best idea. Apparently, privatization hasn’t been particularly profitable, because Ruka’s “elite” police unit operates out of what looks like a dingy warehouse, with so little equipment and staff that, when it finally falls under attack late in the proceedings, you wonder why no criminals realized sooner that they could just walk in and start shooting. (If one were very generous, I suppose one could theorize that the intent was to show the discrepancy between the propaganda and the reality, but on screen it just looks as if the producers could not afford a set and some extras.) 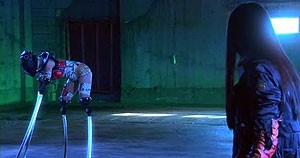 Instead, all creativity goes into the engineers, who are truly a ghastly and disturbing menagerie, their mutated bodies, with suggestions of S&M and deviancy, like something out of a joint nightmare by David Lynch and Clive Barker. Seen as still photos, these images may intrigue the curious and the unwary, but ultimately the film has little idea what to do with these creatures besides set them up to be knocked down in a repetitious series of gore-infused fights scenes. Ultimately, Tokyo Gore Police would work better as a coffee table photo album, nestled somewhere below Giger’s Necronomicon, The Alien Life of Wayne Barlowe, and The Art of Olivia, all of which manage to be not only bizarre but also fascinating – a feat that eludes Tokyo Gore Police.
TOKYO GORE POLICE (Tôkyô zankoku keisatsu, 2008) Directed by Hoshihiro Nishimura. Written by Kengo Kaji, Maki Mizui, Yoshihiro Nishimura (English translation by J.J. Vallejo). Cast: Eihi Shiina, Itsuji Itao, Yukihide Benny, Jiji Bu, Ikuko Sawada. Unrated. 110 mins.