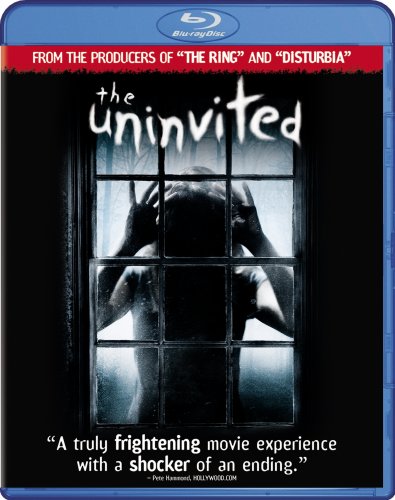 The PG-13 shocker THE UNINVITED snuck through theaters like a cat burglar last year, leaving behind little evidence of its presence other than a few tattered posters hanging from construction site fencing. Not helping the film’s case with genre audiences was its status as yet another remake of an Asian ghost story, this time South Korea’s A Tale of Two Sisters; we’ve had a long-standing knee jerk reaction to this 21st century Hollywood methodology – and not just because of the gaping lack of imagination that it lays bare. From J-horror to K-horror and everything else in-between, the shock implements have lost their sting and feel increasingly trite – not just the distinctive way that otherworldly spirits are depicted, but their jerky movement around the frame made nearly all Asian ghost stories feel like films in the same decades-long series. We haven’t seen the film on which THE UNINVITED is based – a trait that, according to the supplemental features, is shared by the filmmakers.
After losing her mother in a fire, youngest daughter Anna (Emily Browning) is driven into a deep depression and plagued by nightmares. Released after a lengthy stay at a psychiatric facility (and a suicide attempt), Anna returns home to her sister Alex (Arielle Kebbel) and father (the great David Strathairn) and her mother’s former nurse, Rachel (Elizabeth Banks), who has become her father’s very live-in girlfriend. Tensions between Rachel and the girls are intensified when Anna’s increasingly vivid nightmares include the corpse of her own mother, who seems to be accusing Rachel of her own murder. The girls’ suspicions of Rachel deepen when an investigation into her past reveals a recent name change that may have helped cover up the murder of several children under her care (who also begin to appear in Anna’s dreams, which now seem to be full-fledged psychic visions) . This revelation convinces Anna and Alex that Rachel has her sights set on their father, putting them directly in the path of a potentially psychotic killer.
THE UNINVITED plays out most of its brief running time as if V. C. Andrews had been inspired to fashion a Hammer-style gothic potboiler. In fact, it is difficult while watching the film to resist the urge to mentally recast and relocate the film to better suit those ends. The trend towards younger and younger casting (Miss Browning, who submerges her native Aussie accent admirably, was 19 at the time of shooting and looks significantly younger) invariably robs many of these stories of any real depth before they even leave the starting blocks.


Another hurdle is the fact that there isn’t a likeable character anywhere to be found; in spite of their recent tragedy, it is difficult not to see Alex and Anna as anything other than over-privileged, jerky teens. Strathairn couldn’t give a bad performance on his worst day, but weak writing ties him to a non-existent character who exists only as a plot device programmed to appear every so often to dismiss his daughters’ (somewhat legitimate) concerns and provide the picturesque seaside home where 90% of the film is set. Equally thankless is the ‘evil stepmom’ role given to Banks; an effective comic actress (who was very, very good in The 40 Year Old Virgin) but isn’t very believable as either a live-in nurse or a scheming killer.
Anna’s dreams/visions form the core of the plot, and also give the film its very ‘Asian’ influenced shock effects. There are a few undeniably good moments, but anyone well versed in the genre will have already seen enough broken corpses drag themselves across a floor to fill several lifetimes. There is, as you may have heard, a major plot revelation at THE UNINVITED‘s conclusion that makes its discussion in a spoiler-free environment all but impossible. It is one of those tiresome twists that is supposed to make the audience reevaluate everything that they’ve already seen, but this particular story can’t hold up to that sort of scrutiny and looks to be more a case of the screenwriters painting themselves into a corner and using a hoary device to swing free. It’s strange to feel that a film would have been better had it been less ambitious; THE UNINVITED is a pleasant enough semi-gothic ghost story for the first 70 minutes or so, and a more standard conclusion might have been far more satisfying.
We can’t find too many faults with DreamWorks Blu-Ray edition of THE UNINVITED. Its 1080p picture is lovely to look at, wringing the most out of the cool-toned cinematography. Directors Charles and Thomas Guard have adopted a very clean, unfussy shooting style for the picture that compliments the actresses in particular.
The Dolby TrueHD track is equally strong, punching up the scare effects to the point where we kept the sound too low to hear quiet conversations less we be sent flying off our sofa (or engender anger among close neighbors.)
Special features include “Unlocking the Uninvited” (in HD), a ready-for-HBO EPK featurette, which features enough spoilers in its brief running time to make actually watching the film a moot exercise, although it is particularly funny to hear both the screenwriter and director of a remake insist that they haven’t seen the original South Korean film; the concerned parties all site the plot outline as the reasoning for their interest in the project.
Also present are a handful of deleted scenes and a slightly altered ending, both of which are in HD as well.
[serialposts]