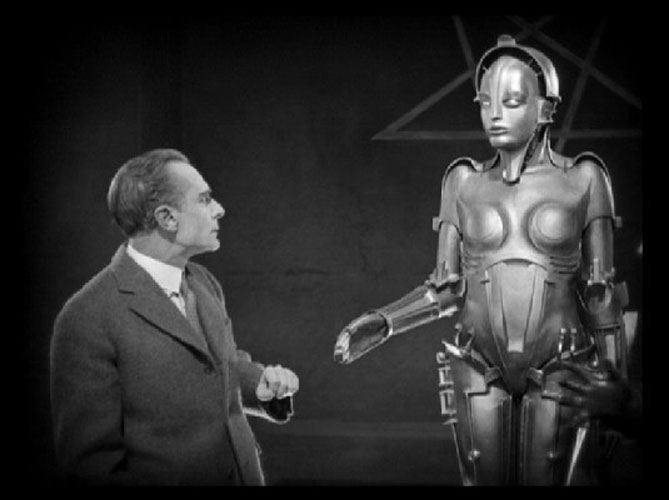 In this article, taken from the book Fritz Lang (Oxford University Press, 1977) by Lotte Eisner, the sculptor Walter Schultze-Mittendorf reveals how he created the iconic “false Maria” robot for Metropolis.

The Birth of the female robot in METROPOLIS

Problems of form? No! Expressionism lived. Technological form had been discovered as motif for painting and sculpture. Primary, in this case, was the question, ‘What material?’
I thought at first to have real metal – chased copper plate. That meant searching for and finding a suitable chaser to execute the work. ‘Complicated,’ I thought, when Fritz Lang tried to interest me in the work. But which material really?
An accident helped us. A workshop making architectural models gave us decisive assistance unintentionally. I went there because of another job. My attention was drawn to a little cardboard box labeled ‘Plastic Wood – trade sample.’ A postal parcel. This ‘trade sample’ was not interesting for the workshop and was given to me. One trial brought the proof straightaway that the material for our ‘machine creature’ had been found. ‘Plastic wood’ turned out to be a knead-able substance made of wood, hardening quickly when exposed to the air, allowing itself to be modeled like organic wood.

Now it needed a procedure that was not very pleasant for Brigitte Helm: namely the making of a plaster cast of her whole body. Parts resembling a knight’s armor, cut out of Hessian, were covered with two millimeters of the substance flattened by means of a kitchen pastry roller. This was then stuck onto the plaster Brigitte Helm, like a shoemaker puts leather over his block. When the material hardened, the parts were polished, the contours cut out. This was the rough mechanism of the ‘machine creature’ that made it possible for the actress to stand, to sit and to walk. The next procedure was furnishing it with detail to create a technological aesthetic. Finally we used ‘Cellon’ varnish mixed with silver bronze and applied with a spray gun, which gave the whole it’s genuinely metallic appearance, so it even seemed convincing when looked at from close range. The work took many weeks however. In those days, films were carefully prepared and thus the realization of a piece of work unusual for a film like this one was ensured. In striking contrast to the present-day German film industry!
[serialposts]