The Haunting in Connecticut – Film Review

I believe in not showing too much. I believe in keeping you on your toes, wondering what you’re going to see next. That is what the power of the screen is all about. It is not what you see, but what you think you see. Suggest, suggest, suggest! Don’t just show, show, show. There is nothing subtle about an ax falling into someone’s face! As Lon Chaney Sr. said to Boris Karloff and Boris said to me: “Leave it to the audience, Christopher. They will think of something that is far, far worse than anything we could possibly show them.”

THE HAUTNING IN CONNECTICUT is a film I had assumed would be another ridiculously overdone Hollywood production, along the lines of Jan de Bont’s terrible remake of The Haunting (1999). Instead, to my surprise and delight, it is exactly the opposite: a beautifully crafted little gem of a movie that harks back to the more subtle and poetic ghost stories that have always defined the very best in the genre – Movies like Jack Clayton’s The Innocents and Robert Wise’s The Haunting. As in both of those films, first time director Peter Cornwell seems to realize that in this area, as Christopher Lee points out, less is more. As a result, we have one of the scariest haunted house movies to grace the screen since Poltergeist.
Supposedly based on a true story of a 1987 incident that took place in Southington, Connecticut, screenwriters Adam Simon and Tim Metcalfe apparently used this incident as the perfect opportunity to put their own fascination with the supernatural to good use. Metcalfe explains, “Our mutual interest in the occult as represented in literature, film and history really helped us shape the story.” Indeed, their script follows the classic format of haunted house stories, but improves on them by introducing several intriguing new elements, such as the focus of the haunting being on a 16-year old boy who is dying from cancer. His proximity to death and the world beyond seems to give him a much greater receptivity towards seeing spirits than the other members of the household. The house itself is a former funeral home, where horrific séances were held during the 1920’s, making for a suitably creepy atmosphere and providing quite an intriguing reason for the house to be haunted in the first place.
To reveal any more would spoil the story, but suffice it to say this is New England Gothic of the kind H. P. Lovecraft might easily have dreamed up. The screenwriters also give the story a backbone of solid relationships for the actors to work with, including a touching love between Virginia Madsen playing a strong and willful mother, who must deal with the probable death of her teenage son, and the young boy himself, whose ordeal in facing death and undergoing his cancer treatments, is nearly as horrific as the ghosts he eventually encounters. Actor Kyle Gallner, playing the part of the youngster, gives it the kind of credibility that is usually the weakest link in these movies, while Virginia Madsen is equally good in her role as his mother. Elias Koteas plays a Reverend (who is also dying) with the kind of quiet understatement that is exceptionally rare in this kind of part, making his theories on why the haunting is taking place all the more believable.
What is also especially remarkable about the film is the solid technical craft it displays, on what must have been a fairly limited budget by today’s movie-making standards. I’ve certainly never heard of any of the behind-the-camera talent before, but they all contribute work that seems as if it were turned in by veteran Hollywood experts. For example, I could have easily mistaken the beautifully precise editing of Tom Elkins to be the work of Dede Allen. The moody and dark cinematography provided by Adam Swica, compares quite favorably to Freddie Francis’s shadow play in The Innocents. The set designs of Alicia Keywan make the house as memorable a character to the story as the much larger Gothic mansion designed by Elliot Scott for The Haunting. Perhaps best of all, the score by Robert J. Kral wraps the entire production up in exactly the kind of lyrical quality needed, before abruptly switching gears to a sudden dissonance that will jolt viewers out of their seats. Since Kral studied under Jerry Goldsmith, it appears he has picked up some key ideas from the Maestro.
Unfortunately, it appears that Lionsgate is going for a very quick playoff with this movie, and it most likely will be exorcised from theaters within a few weeks, before any positive word of mouth can spread. Which is rather a shame, because seeing this wide screen film on DVD in your living room will certainly not be half as scary as seeing it at a theater. So my advice for anyone who wants to see a wonderfully atmospheric supernatural ghost story, without the usual overdone gore and guts, is to see the film at your local cinema as soon as possible! 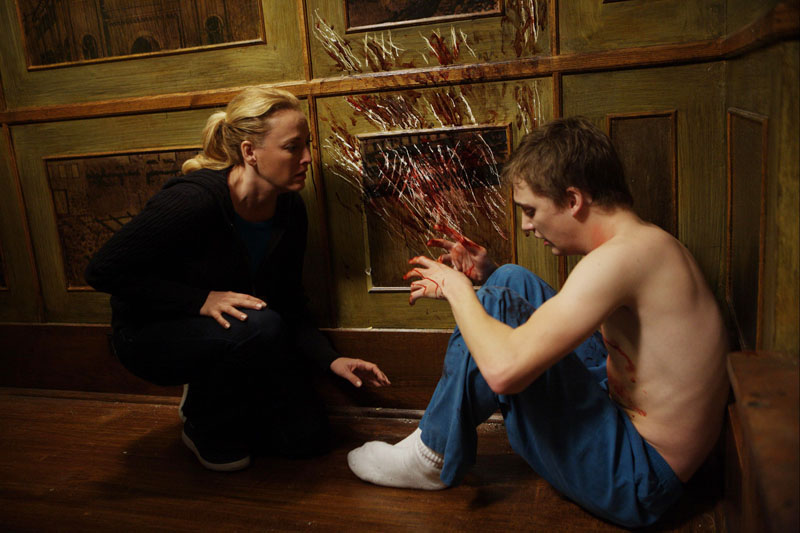 If you like haunted houses, check out Cinefantastique Online’s catalogue listing of the hottest haunted properties on the market.