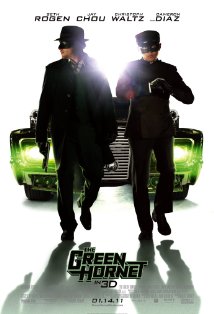 I saw a film today that I had to watch on two levels.
If I were simply a film-goer who had no real idea about who the title character was, I saw an simple action comedy, an affectionate spoof of comic book heroes. It featured good, if ultimately cartoonishly absurd action sequences and a fairly decent 2-D to 3-D conversion. Consistently amusing, but never particularly funny, and pretty much devoid of any real wit or point. An aimless but fun popcorn movie, possibly appealing to an audience who may feel burned out by more serious-minded superhero films.
As an actual fan of the 75-year-old character of radio, comics, TV and film, I’m pretty much appalled. While it’s obvious the writers, star Seth Rogen and Evan Goldberg know or researched a lot about The Green Hornet, this just doesn’t seem to be a Green Hornet movie. The premise seems more like: “How do we write a movie in which Seth Rogen plays a masked crime fighter?” Every choice in the film gives the appearance of  servicing that concept.

Rogen’s Britt Reid isn’t a smooth playboy or thrill-seeking daredevil, he’s a kind of  sad, petulant man-child trying to extend his frat-boy years into a continuing lifestyle, thanks to being the son of a rich newspaper publisher. Well, even that could be acceptable, if he finally becomes inspired to do something positive, if extreme with his life. The idea is toyed with, but you never really buy it, because he remains the same jackass and flop he always was throughout the film, only now with a literally unbelievably talented sidekick.

And although Jay Chou does a good, if oddly tentative-feeling job as Kato, and every effort is made to show that he is a full partner—in fact the vital part of the team—Kato remains a sidekick.  Despite his fighting prowess and technical expertise in just about everything, he also comes off as being a bit of a jerk sometimes.
That’s no insult, because everybody in the film is pretty much a jerk, no matter how smart or scary they’re supposed to be. Britt’s dad James Reid (Tom Wilkinson) is a charmless, insensitive agressive Type-A personality-hole. The villain Chudnofsky (Christoph Waltz) is an insecure, hypersensitive, charismaless schmuck, despite being a murderous sociopath who has somehow managed to become the major crime boss of L.A.
Lenore Case (Cameron Diaz), who becomes Britt Reid’s secretary/researcher, supposedly with a degree in criminology, comes off as a little clueless.  The D.A. Frank Scanlon (David Harbour) turns out to be a screw-up (and more). James Franco makes a cameo as a rival drug lord, who is also an loud-mouthed idiot.

The only character does not seem to be a major dip is Mike Axford, normally the comic relief in the Green Hornet universe. That’s probably because Edward James Olmos plays Axford (now the editor in chief of the Daily Sentinel) in a very low-key and bland style in the few scenes he’s actually in the film.

Michel Gondry does give the film a little visual flair, which helps give the movie some life. The 3-D works alright, though in the theater I attended some scenes and the end titles were noticably cut off on the sides, to the extent that some action, and certainly credits, were not completely visble on-screen.

The action is nicely staged, and works well at first, but the situations the heroes are placed in reach truly PINK-PANTHER levels of ludicrousness at times by the end of the film — without, I must repeat, ever actually managing to be laugh-out-loud funny. Maybe you’ll smile and snicker a bit.


The Black Beauty survives things that even a tank couldn’t bear up under. It’s used as a wall-crushing battering ram repeatedly. That is presented as The Hornet and Kato’s standard tactic in dealing with drug labs. It gets cut in half and is still drive-able. Seriously. If the word serious can be ascribed to anything the film.

The Green Hornet and Kato actually kill people in this film, accidentally and intentionally, which is very much against the original conception of the character. Makes the gas gun pretty much pointless. I’m surprised the Trendle family—still the owners—let that get by. Maybe the ups and downs of trying to get a movie made since at least the 1990’s wore them out.

All that aside, it’s hard to hate THE GREEN HORNET. It’s kind of like that guy at the party who’s trying really hard to be likeable and amusing, but winds up being loud and a little tiresome by the end of the night.
Like I said, I didn’t hate it. It’s passably amusing, and I don’t regret seeing it, even though I might really wish it hadn’t been made in this way. I sure don’t think it’s a good Green Hornet film. If Seth Rogen had played the Blue Wombat, I might have thought it was decent slacker/stoner action comedy.
If you don’t feel nostalgic about the character, and are looking for a little undemanding fun amongst the winter doldrums, you might well enjoy the movie.
THE GREEN HORNET (2011) Columbia Pictures
Starring Seth Rogen, Jay Chou, Christoph Waltz, Cameron Diaz, Edward James Olmos, and David Harbor.
Directed by Michel Gondry, Produced by Neal H. Moritz , Written by Seth Rogen and Evan Goldberg.  Based on The Green Hornet by
George W. Trendle and Fran Striker.
Music by James Newton Howard,  Cinematography by John Schwartzman Editing by Michael Tronick.
A Studio Original Film, distributed by Columbia Pictures.