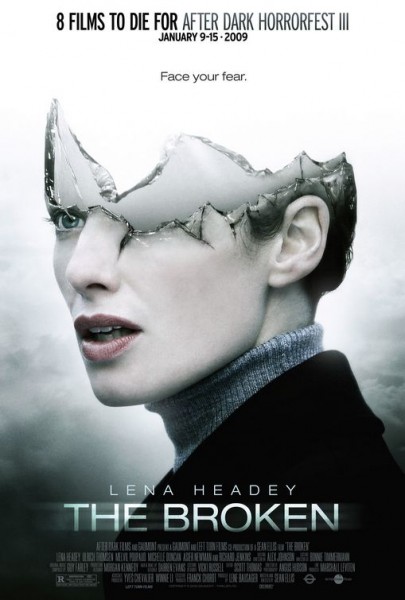 So far, this is the best of the “8 Films to Die For” in the 2009 After Dark Horrorfest. Rather than filling the screen with gore, violence, and cannibalism, THE BROKEN works from an intriguing premise to create an enigmatic mystery-thriller with overtones of paranoid horror. Shot in cool colors with slick production values and solid performances, it is consistently engaging until the mystery wears thin for lack of an adequate explanation. Is it supernatural, science fiction, or fantasy – or is it all in the character’s head? Writer-director Sean Ellis is not saying, and much as we admire his courage for going the David Lynch route and leaving it up to the audience, one wishes for a few clues that would at least point us in the right direction. Without these, the film is ultimately unsatisfying, squandering its better qualities with a lackluster ending. In this regards, it parallels the 2007 After Dark Horrofest entry THE DEATHS OF IAN STONE, another British film that was more speculative fiction thriller than horor movie, and which also frittered away its premise on a weak third act. (Which leaves us wondering: Are the Brits the only ones making modestly budgeted genre films that rely more on good ideas than gore? And if so, why can’t they bring those good ideas to a satisfying resolution?)
The story has radiologist Gina McVey (Lena Headey) haunted by her doppleganger – literally, her reflection – after it breaks out of a mirror (off screen). While making a phone call, she sees her double driving away, and then follows her home. Driving away after a confrontation that we do not see, she collides with a cab and ends up in a hospital with only fragmentary memories of what happened earlier that day. As more mirrors break, Gina finds herself growing paranoid, believing that her boyfriend and family are being replaced by duplicates. Eventually, a trail of clues lead her back home to unravel the mystery hiding behind her lost memories…
THE BROKEN plays the gambit that plauges films of this type: in order to “play fair” with the audience and make all the pieces  fit together, the “surprise” ending is predictable to anyone paying attention; the only way to concela it is by withholding vital information. Unfortunately, once you notice what is being withheld, the solution becomes that much more predictable. Why does Gina move in with her boyfriend after the accident, instead of going back home? Could it be that the filmmakers do not want us to see something in her apartment? And are we to believe that her friends and family never went to her apartment to fetch her clothes and toiletries while she was recovering in the hospital? (Ironically, the biggest unanswered question – what happened to the driver of the other car – does not figure into the mystery at all – you keep expecting some surprise in this regard, but the film never bothers addressing the subject at all.)
Ultimately, the story would work better if it sustained the interpretation that what we are seeing really is the paranoid result of Gina’s post-traumatic stress from the accident. Unfortunately, too many objective scenes (in which her character does not appear) confirm that the doubles are real, robbing us of the best way to rationalize the logical shortcomings in the scenario.
Worse, the film never bothers to offer any explanation for what is happening; the phenomena is simply presented without hint or rational. This would be acceptable if it viewers were given a few clues and invited to fill in the blanks, but there is no mention of parallel worlds of the folklore of mirrors or anything else; the doppelgangers remain an elusive plot device, their motives and behavior a complete mystery. They seem to be mirror images of the originals (down to their hearts being on the right side of the chest), but we never even know to what extent their memories duplicate the originals or even whether they can recognize each other. At times they manage to impersonate the people they have replaced; at others, they act like cliched pod people from INVASION OF THE BODY SNATCHERS.
Visceral horror is, thankfully, kept to a minimum. Its one obvious outburst is a tad ridiculous, when a double kills its original by shoving a hand into her mouth – a method that looks at least as painful to the perpetrator as to the victim.
Fortunately, Sean Ellis manages to sustain a creepy sense of paranoid dread thanks to the fear of being replaced by these mysterious usurpers. Visually, the film is very assured. The crucial car accident is spectacular, echoing the bullet-time slow-motion of Dario Argento’s climactic crash in FOUR FLIES ON GREY VELVET. In the grand tradition of modestly budgeted features, the editing contrives to show us this footage over and over (gotta get your money’s worth out of such a big piece of the budget), but the great thing is that the script justifies the repetition, because Gina frequently flashes back to the scene while trying to reconstruct her shattered memories.
In a way these strong points makes THE BROKEN more frustrating than a film that is bad from beginning to end; it grips your attention throughout, only to leave you unsatisfied at the end. Nevertheless, the journey is worth taking even if the destination is disappointing.