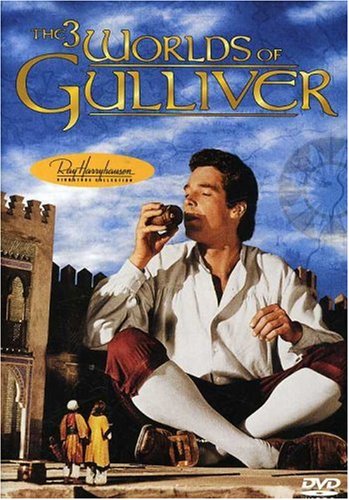 Produced during Ray Harryhausen’s most fruitful period, THE 3 WORLDS OF GULLIVER is one of the special effect artist’s most overlooked films, obscured by the fact that it arrived in between such famous titles as THE 7TH VOYAGE OF SINBAD and THE MYSTERIOUS ISLAND (my two personal favorites of Harryhausen’s). Partly this is due to the minimal use of stop-motion animation (limited to a squirrel and a crocodile), though effects are otherwise plentiful, and partly it’s because the source novel, poses a number of difficulties, many of which the filmmakers here fail to overcome.
First off, those who have read Jonathan Swift’s complex and satirical classic Gulliver’s Travels know that the titular hero traveled to four different lands; this film contains only the first two (the 3rd world in the title being England, which is briefly presented in the opening). Like many previous adaptations (such as the famous Dave Fleischer animated version), Swift’s story is greatly simplified and presented more as a children’s adventure tale. This adaptation by Jack Sher and Arthur Ross is to be commended for at least retaining more of Swift’s satire than most, but still it descends into farce and cuteness rather than confronting the implications of Swift’s story.
In fact, rather than originating with Harryhausen (as did most of his films), THE 3 WORLDS OF GULLIVER was a project that producer Charles Scheer took on, based on Sher and Ross’s script. Sher was retained to direct the film as well. The amiable and appealing Kerwin Mathews was hired to play the main character, Dr. Lemuel Gulliver, whose name is meant to suggest someone who is gullible. Whereas Swift’s Gulliver starts off as a something of a conceited, clothes-obsessed naïve fool who lacks self-understanding, Sher’s Gulliver is a frustrated idealist who decides that he must make his fortune to get anywhere in the world, much to the consternation of his fiancée Elizabeth (June Thorburn). (In the book, Gulliver is already married and his wife is barely present, but for commercial concerns, the filmmakers decided to add a love interest whose potential nuptials can make for a traditional “happy ever after” ending).

Gulliver’s Travels implicitly poses the question of what should be the governing factor in social life: physical prowess or moral righteousness? In his voyage to Lilliput, the first and most famous part of the story, Gulliver has physical might as a giant in Lilliput, where he can defeat the Blefuscudian navy by virtue of his immense size; however, it becomes readily apparent that “might does not make right.” Gulliver does not share the Lilliputian emperor’s (Basil Sydney) appetite for the destruction of his enemies and quickly loses favor when he refuses to accede to the emperor’s demands that the Blesfuscudians be wiped out.
While Sher and Ross eliminate much of Swift’s satirical dialogue, they do at least retain some of Swift’s ironic commentary. For example, the emperor admits he doesn’t need a prime minister to wage a war, “but I need one to blame in case we lose it.” Gulliver discovers that the basis for the war with Blesfuscu is over which end of an egg should be opened first (the Lilliputian emperor favors the small end); the source of the disagreement is a passage in their holy book, rendering the seemingly ridiculous question a religious and moral issue that justifies, in their eyes at least, the warfare it has sparked. The Lilliputians’ moral beliefs easily lead to a very immoral result.

Naturally, as a family-oriented children’s film, THE 3 WORLDS OF GULLIVER eliminates Swift’s scatological humor, which is present throughout the novel. Swift uses this excremental motif to drive home the point that humans are not wholly spiritual or mentally transcendent figures (a typical Enlightenment notion), but are governed by crass, vulgar physical needs. The film version replaces Gulliver alienating the Lilliputian empress (Marian Spencer) by urinating on the palace to effectively put out a fire with him spewing a mouthful of wine to extinguish the flames, and soaking her gown in the process. (Naturally, references to Brobdingnagian flies defecating on Gulliver’s meals get excised entirely).
What THE 3 WORLDS OF GULLIVER does retain is the portrait of Lilliputians as very small, petty people who imagine themselves to be quite grand and glorious. They are filled both with immense pride and also backbiting and conspiracy. Though they are pumped up with self-importance and national pride, Gulliver comes to see that they are actually quite puny and pathetic. When the Emperor accuses him of being a traitor, Gulliver responds, “I stop wars, put out fires, feed people, give them hope and peace and prosperity — how can I be a traitor?”


Conversely, Gulliver experiences life at the opposite end of the spectrum in Brobdingnag where he encounters a land of giants. Initially, his first encounter with the Lilliputians was one of entrapment, as the tiny people tie the giant Gulliver down with many ropes. Similarly, the book, Gulliver becomes enslaved by a Brobdingnagian farmer who later sells him to the royal family.
However, in THE 3 WORLDS OF GULLIVER, Gulliver is found by Glumdalclitch (Sherri Alberoni), who takes him to the Brobdingnagian king (Gregoire Aslan), where he is re-united with Elizabeth, who had stowed away on the same boat on which he set sail. Most of the Swift’s Brobdingnagian episode is eliminated in favor of a simple story wherein the king (a very serious and philosophical character in the original) becomes a comic villain whose pride is wounded when Gulliver happens to best him in chess. Swift’s Brobdingnagians represent how the coarse, physical side of human existence cannot really be ignored, as Gulliver encounters difficulties with the flies they ignore, and is repulsed by their enormous pores and their stench and their sexual appetites.

Instead, Sher and Ross add the character of Markovan (Charles Lloyd Pack), the court alchemist, who accuses Gulliver of being a witch and imposes a test designed to turn Gulliver blue. As a physician, Gulliver knows enough chemistry to make himself acidic, turning his clothes red instead, but Markovan continues to advocate against him until the formerly benevolent king orders Gulliver be attacked by a pet crocodile (the main stop motion setpiece of the film). Glumdalclitch helps Gulliver and Elizabeth escape by placing them in her basket and tossing it into a river that leads out to the ocean.
At the end of THE 3 WORLDS OF GULLIVER, the couple wash up on a shore that turns out to be England (we see a normal-sized basket in the background rather than a Brobdingnagian-sized one), and the dialogue suggests that the whole experience might have been a dream (a la THE WIZARD OF OZ), but the end result seems to be that Gulliver has learned the folly of ambition and will be perfectly content to settle down with Elizabeth after all, a rather unsatisfying conclusion to the tale. (After all, Harryhausen didn’t get to be a master of his craft by being unambitious).
Harryhausen pulls off most of his effects fairly seamlessly, though one sequence in which Gulliver pulls fish from the sea using his hat is wildly off-scale. Bernard Herrmann’s musical score for THE 3 WORLDS OF GULLIVER is one of the composer’s finest, though the two songs in the film by Ned Washington and George Duning are negligible. Kerwin Mathews hero is suitably decent and appealing. The addition of the fiancée to the storyline probably prompted a similar addition to Harryhausen’s adaptation of FIRST MEN IN THE MOON. Overall, though overshadowed by other Harryhausen’s fantasies, THE 3 WORLDS OF GULLIVER is just what it was meant to be—a reasonably entertaining family-friendly fantasy adventure, lacking Swift’s bitterness and complexity, but still possessing some satirical jabs as the satire has been leavened by farce.
THE 3 WORLDS OF GULLIVER (1960). Director – Jack Sher, Screenplay – Jack Sher & Arthur Ross, Based on the Novel Gulliver’s Travels by Jonathan Swift, Producer – Charles H. Schneer, Photography – Wilkie Cooper, Music – Bernard Herrmann, Visual Effects Supervisor – Ray Harryhausen, Art Direction – Derek Barrington & Gil Parrendo. Cast: Kerwin Mathews (Dr Lemuel Gulliver), June Thorburn (Elizabeth Wesley), Sherri Alberoni (Glumdalclitch), Gregoire Aslan (King Brobdignag), Lee Patterson (Reldresal), Basil Sydney (Emperor), Charles Lloyd Pack (Makovan), Martin Benson (Flimnap), Marian Spencer (Empress), Mary Ellis (Queen), Jo Morrow (Gwendolyn Bermogg), Peter Bull (Lord Bermogg)