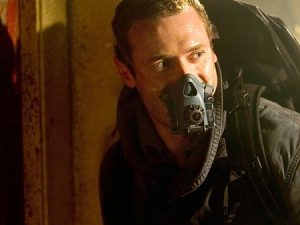 Via SpoilerTV.com, here’s the first cast and production images from Steven Spielberg’s TV project TERRA NOVA.
The show Stars Jason O’Mara, pictured here in a breathing mask of some sort.

“The series centers on the Shannon family as they join the tenth pilgrimage of settlers to TERRA NOVA, the first colony of humans in this second chance for civilization. JIM SHANNON (O’Mara), a devoted father with a checkered past, guides his family – wife ELISABETH and children JOSH and MADDY – through this new land of limitless beauty, mystery and terror.
In addition to blue skies, rolling rivers and lush vegetation, TERRA NOVA offers new opportunities and fresh beginnings to its recent arrivals, but the Shannons have brought with them a famial secret that may threaten their citizenship in this utopia. These adventurers soon discover that this healthy, vibrant world is not as idyllic as it initially appears. The areas surrounding TERRA NOVA are filled with dangerous dinosaurs and other prehistoric threats, as well as external forces that may be intent on destroying this new world before it begins.”


The series 2-hour pilot will air on The Fox network this Spring, with the series expected to arrive in the Fall.  Rene Echevarria (DEEP SPACE NINE was brought in to produce the troubled pilot, and fellow STAR TREK vet Brannon Braga is set to be the 20th Century Fox /Dreamworks TV series’ “showrunner”.