Writer-director Mitchell Lichtenstein’s low-budget horror film is a demented spoof of teen sex, abstinence only programs, and especially male fear of women. The not-so-subtle joke is that women are traditionally the victims in horror movies, but TEETH turns the tables by bringing men’s worst paranoid Freudian nightmare – vagina dentata – to life. The result is more satirical than scary: Lichtenstein is interested in dramatizing the idea through the plot and characters, not merely in exploiting it for cheap sensationalism; however, he ultimately delivers the gory goods in the form of multiple mutilated penises. These squirm-inducing highlights feature a few unabashedly graphic depictions that leave little or nothing to the imagination; the over-the-top imagery (which includes one severed member that winds up as puppy chow) elicits mixed howls of disgust and screams of laughter.
Jess Weixler plays Dawn O’Keefe, the uber-perky girl next door who acts as a motivational speaker at her high school’s abstinence program. Just next to her home, nuclear power plants billow smoke into the air like factories in a David Lynch film, suggesting one possible explanation for her ability (seen in a childhood prologue) to nip the finger of her future step-brother during a game of “I’ll show you mine if you show me yours.”
The nuclear plants are never referenced in the dialogue. Instead, a class lecture speculating on the evolution of a rattlesnake’s rattle – a mutation that offered a survival advantage – implies that something similar has happened to Dawn. Except of course, Dawn is completely the opposite of a rattlesnake, with no visible or audible warning, her victims has no clue about the danger they are literally courting when the make sexual advances on her.
Rather cleverly, TEETH avoids lapsing into rape-revenge melodrama. The script paints the male aggressors-turned-victims in ambiguous shades (the first is a fellow abstinence-only believer who succumbs to temptation), and Dawn is ambivalent – and also shocked and disgusted – when she learns that she is capable of emasculating her would-be seducers. Only by the end has she become a full-blown femme fatale, confident – and even eager – in her ability to level the playing field that so long favored men.
In the tradition of good popular art, TEETH leaves you to sort out the metaphors for yourself, never stating its message obliquely. This is just as well, because occasionally Lichtenstein seems slightly unsure of how all the elements tie together. Nothing about Dawn’s mother or her step-father provide any hint of how she came to embrace the abstinence-only creed; this seems to be a simple writer’s device to explain how Dawn could be so naive about her own genitalia until they take their first bloody bite.
This starting point also provides a sharper contrast with where Dawn ends up by the finale, but it would be nice if it were integrated more carefully into the thematic underpinnings of the story. Weixler, who is otherwise very strong in the lead role, initially comes across like a naive cartoon character – all wide-eyed innocent enthusiasm, and the film seems to be not merely satirizing the program for which she speaks but also mocking her personally. Fortunately, as she learns the truth about herself and about the men around her (who are all pretty much worthless shits), she matures and gains the full measure of our sympathy, until we are rooting for her.
Lichtenstein does not lay the message out explicity, but clearly he wants us to imagine a world wherein women finally have full control over their own sexuality, in a way that no man can violate with impunity. TEETH suggests that will power, good intentions, and abstinence will not secure women from unwanted sexual advances; only castration axiety made real will do the job.
One would like to imagine that this is an exaggeration, but it does have a sad ring of truth about it… 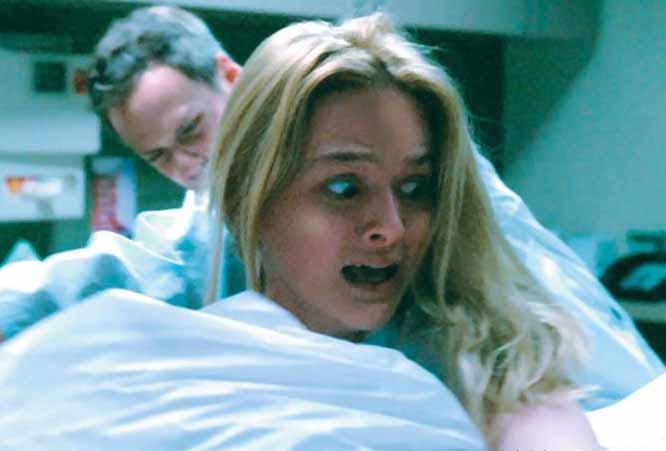