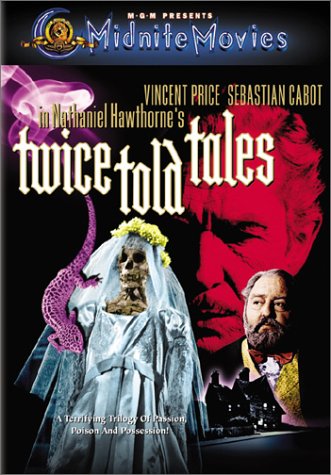 This is a colorful but ultimately weak attempt by United Artists to cash in on American International’s Poe series by adapting three Nathaniel Hawthorne stories into a TALES OF TERROR anthology format. As in Roger Corman’s 1963 film, TWICE TOLD TALES (released later the same year) features Price in three starring roles, one for each episode. Price plays Alex Medbourne in “Dr. Heidegger’s Experiment,” Dr. Rappacicini in “Rappaccini’s Daughter,” and Gerald Pyncheon in “House of the Seven Gables.” (Previously, Price had played a supporting role in the 1939 full length film version, which starred George Saunders in the lead role). The first depicts two old friends whose relationship is ruined when a mysterious liquid restores not only their youth but also the life of a long-dead woman (who was engaged to one and having an affair with the other). “Rappaccini” is a tragic tale of a a young student (Brett Halsey) who fals in love with a beautiful woman (Joyce Taylro) whose very touch is poisonous, thanks to the experiments of her botanist father. “Seven Gables” involves the scion of a corrupt old family who returns to the family mansion to search for hidden treasure, only to be felled by the vengeful ghost of the man betrayed and killed by his ancestors.
Directed by Sidney Salkow, TWICE TOLD TALES features beautiful Technicolor cinematography (by Ellis W. Carter), but it suffers from slow pacing and (despite the melodramatic hyperbole) dull storytelling. The screenplay by Robert E. Kent offers loose adaptations of the Hawthorne stories, pushing the film closer to outright horror without ever generating much in the way of genuine thrills. For example, in “House of the Seven Gables,” the prosaically rendered ghost elicits more graons than screams, and the skeletal arm that emerges from a secret hiding place to strangle Price, while the titular house (like Poe’s House of Usher) collapses around him, verges on the outright laughable.

The best episode is probably the first, which captures a nice sense of tragedy, thanks to the performances by Price and Sebastian Cabot. Although the old age makeup they were before drinking the youth-restoring liquid is fairly obvious, they manage to convey the warmth of close friends bound together by many years together, and it is sad to see the restored passions of youth tearing them apart and ultimately destroying them. Although the script ups the ante quite a bit from the written word, it works well enough on screen. (Hawthorne’s version of “Dr. Heidegger’s Experiment,” the good doctor merely observes the reactions of three friends who partake of his youth elixir, and after seeing them revert to the petty bickering ways of youth, proclaims that he himself will never quaff the liquid; resurrecting a long-dead lover was purely a Hollywood invention.)
Neither of the subsequent two tales offers as compelling a relationship, and the horror movie schtick of the “Seven Gables” episode condenses Hawthorne’s novel into a typical blood-and-thunder haunted house story (although the production values are not bad, with the destruction of the house convincingly done).

Price and director Sidney Salkow had previously worked together on THE LAST MAN ON EARTH, an Italian-filmed adaptation of Richard Matheson’s novel, I Am Legend. The film was actually directed by Ubaldo B. Ragona; Salkow was more or less the representative of the American investor, helping Price on set and supervising the U.S. dub for American International Pictures to release in the U.S. Though the result is not one of Price’s better efforts, the actor did not blame Salkow. “I thought he was a very good director,” Price replied when I asked him why he would want to work with Salkow again.

TWICE TOLD TALES was previously available on DVD as part of MGM’s “Midnight Movies” label. That version is now out of print. MGM re-issued it as part of the Midnight Movies Double Features, paired appropriately enough with its far superior model TALES OF TERROR. This bare-bones presentation featured good prints of both movies; a 1.66 transfer of TWICE TOLD TALES; English mono sound; and options for English, French, and Spanish sub-titles. The only bonus features were trailers for both films.