Antje Traue is Faora in 'Man of Steel'


Variety reports that German actress Antje Traue (PANDORUM) will play the Kryptonian villainess Faora in Zack Snyder’s MAN OF STEEL,
Faora has had several incarnations, from male-hating killer to ruthless scientist and (on SMALLVILLE) the wife of General Zod, who will be played by BOARDWALK EMPIRE’s Michael Shannon.
The serial man-killing version of Faora was used as a basis of SUPERMAN & SUPERMAN II’s Ursa, played Sarah Douglas.
In the comics, the first Faora’s knowlege of a deadly form of Kryptonian martial arts based on pressure points and the nervous system made her a formidable fighter.
April 28, 2011

Dan Persons and Steve Biodrowski narrowly avoid a sucker punch to the solar plexus as they dodge and feint their way through an examination of Zack Snyder’s new CGI-laced fantasy action pic. Is SUCKER PUNCH a female empowerment flick or another male fantasy about hot chicks in skirts wielding weapons? Is it an original vision for the 21st Century, or is it a rehash of a dozen other flicks (BRAZIL, DRAGONSLAYER, THE CABINET OF DR. CALIGARI, MOULIN ROUGE and ALICE IN WONDERLAND, to name a few)? Does Emily Browning have more than one expression, and is Scott Glenn ready to star in THE IGGY POP STORY? These and other questions are asked, if not necessarily answered in the Cinefantastique Spotlight Podcast #10. 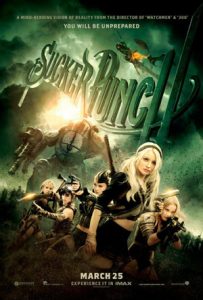 Zack Snyder on 'Man of Steel'


Interviewed by the L.A. Times, director Zack Synder confirmed that the new Superman movie —likely to be called THE MAN OF STEEL— will be a true reboot, ignoring SUPERMAN RETURNS and the Richard Donner/Christopher Reeve films.

“Literally, the one thing that everyone can start to think about is that we’re making a movie that finally goes with the approach that there’s been no other Superman movies.
If you look at BATMAN BEGINS there’s that structure: there’s the canon that we know about and respect, but on other hand there’s this approach that pre-supposes that there haven’t been any other movies. In every aspect of design and of story, the whole thing is very much from that perspective of ‘Respect the canon, but don’t be a slave to the movies.’”
“Superman is the one constant in the universe. You know that if you do Superman right — or at least if you do him with respect — you know you end up with something great. … in some ways that is virgin territory. No one knows what that is. In some ways Superman is the most recognizable superhero on the planet, but also the most unknown. Just what he can be? People have preconceived ideas about him, but probably all of them are wrong.”

Synder declined to comment on the design for the Man of Steel’s costume, but implied the public will see it relatively soon.
“We’re going to have to show it before we shoot, probably a while before that,  because someone will be on the set and get a picture of it.”

I asked if Snyder had anything he could share about the costume that Cavill will wear. ”I can’t say — although I appreciate the question. I’d love to talk about it. We’re going to have to show it before we shoot, probably a while before that because [otherwise] someone will be on the set and get a picture of it.” 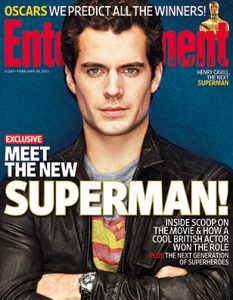 
From the Press Release:

Warner Bros. Pictures and Legendary Pictures announced today that Henry Cavill has won the coveted role of Superman, the iconic superhero.
The film will be directed by Zack Snyder, who stated, “In the pantheon of superheroes, Superman is the most recognized and revered character of all time, and I am honored to be a part of his return to the big screen. I also join Warner Bros., Legendary and the producers in saying how excited we are about the casting of Henry. He is the perfect choice to don the cape and S shield.”
Charles Roven, Emma Thomas, Christopher Nolan and Deborah Snyder are the producers of the film. The screenplay is being written by David S. Goyer based on a story by Goyer and Nolan. Thomas Tull and Lloyd Phillips are serving as executive producers.
Cavill recently wrapped production on “The Cold Light of Day” and stars in the upcoming “Immortals,” opening this fall.
Targeted for release in December 2012, the new Superman movie will be distributed worldwide by Warner Bros. Pictures, a Warner Bros. Entertainment Company.

Henry Cavill was reportedly up for the role of Superman for SUPERMAN RETURNS, and in the running to the lead in BATMAN BEGINS.

Superman to Shoot in Vancouver?

According to Canada’s The Globe And Mail, Superman may be flying off to Vancouver  for his film reboot.
According to  Peter Leitch, President of North Shore Studios and Mammoth Studios, Zack Snyder’s next project is going to be filmed at the studio in British Columbia.
Snyder filmed WATCHMEN at the facility, where they built impressive New York streets for the comic book movie.
While Peter Leitch would not say that the Superman film is Zack Synder’s project, apparently other sources confirmed to the newspaper that the Warner Brothers film was heading there next year.
Promoting the local industry, Leitch said:

“I think it’s a great signal that we’re doing very well here and that we’ve got the quality technicians. … We’ve got a reputation now that we turn out quality product here and I think that’s made the difference.”

Might also be a way of keeping the project within a reasonable budget, something to bear in mind for a potentially FX-heavy movie.
No comment from director Synder or Warner Brothers Pictures as yet.

Zimmer Will NOT Score Superman

Contrary to eariler reports, composer Hans Zimmer (THE DARK KNIGHT) told The Hollywood Reporter that he would NOT be scoring Zack Synder’s SUPERMAN Reboot.
Zimmer said:

No! Absolutely not! You know, I can’t even remember ever talking about Superman… How can I say it: My heart belongs to Batman. I wouldn’t even know how to go and give voice to it. I haven’t thought about it.

Asked if he would be be interested in following in the footsteps of John Williams, composer of  SUPERMAN THE MOVIE’s epic score, he had this to say:

” Right! John Williams, the greatest living composer — full stop. And that happens to be one of his greatest themes. So no. And I’m not thinking of rewriting Beethoven’s Ninth either. It just sounds like a thankless task, you know?
So that’s unequivocally a no. I have never spoken with Zack Snyder.”

Offhand, I’d say we can probably take Hans Zimmer at his word that he is not planning to write the music for any Superman project currently in the cards.

The Search For Superman

According to Deadline.com, director Zack Snyder (WATCHMEN) and producer Christopher Nolan have begun their search for an actor to play Superman in the Warner Brothers reboot of the character.
The article claims that the studio may opt to go the route of choosing a relative unknown or an actor from television. They’re reportedly looking for someone between 28-32.
This of course is likely flexible; Sony/Columbia was looking for someone 18-24 to play Spider-Man, and ultimately chose to go with 27-year old Andrew Garfield.
As noted in the piece,  any established TV actor currently in a series might not be available to play the role, as the next Superman film is likely to begin production June 2011,  when most shows would also be shooting. One of the reasons for pushing it into production is that certain rights revert to the Siegel/Schuster estates in 2013.
The role has featured several relative unknowns, the first live-action Superman was serial and B-movie actor Kirk Alyn, Christopher Reeve had done mostly soaps and theatre, and Brandon Routh was not well known before SUPERMAN RETURNS.  SMALLVILLE’s Clark Kent,  Tom Welling, was essentially a model—though he’s yet to actually don the iconic red and blue outfit. George Reeves had been a moderately known actor, supporting in A features, starring in B-movies before accepting the role—which he considered a distinct downward step in his carreer.

Legend of the Guardians, The Owls of Ga'Hool: CFQ Post-Mortem Podcast 1:33.1

Having examined the subtle science fiction of NEVER LET ME GO, Dan Persons and Lawrence French turn their attention to the family-oriented fantasy of LEGEND OF THE GUARDIANS: THE OWLS OF GA’HOOL, a computer-animated film directed by Zack Snyder. Can the man behind the stylized violence of 300 and WATCHMEN – not to mention 2004’s remake of DAWN OF THE DEAD – adapt to the animation medium? Listen in and find out.

LEGEND OF THE GUARDIANS: THE OWLS OF GA'HOOLE, Zack Snyder