In the curious ecology that is Hollywood, a film that’s best known as a poster child for what not to do when converting 2D to 3D and for a declarative that become something of a pop-culture punchline has to, of course, have a sequel. In WRATH OF THE TITANS, there’s no Kraken-releasing, but that doesn’t mean demigod Perseus (Sam Worthington) doesn’t have his hands full, what with his brother Ares (Edgar Ramirez) teaming up with his uncle Hades (Ralph Fiennes) in order to sacrifice big daddy Zeus (Liam Neeson) in an attempt to resurrect Kronos, a big-ass lava guy who also happens to be father to Zeus and Hades. It’s a family thing, see?
Cinefantastique Online’s Steve Biodrowski and Dan Persons get together to discuss how director Jonathan Liebesman (BATTLE LOS ANGELES) fares in tackling this new installment of the mythological franchise. Then Lawrence French joins them to give his reactions to two other releases: the fractured fairy tale, MIRROR MIRROR, and the ominous horror exercise INTRUDERS. Then Dan weighs in with his thoughts on the low-key cloning drama, WOMB. Plus: What’s coming in theaters.

“A decade after his heroic defeat of the monstrous Kraken, Perseus—the demigod son of Zeus—is attempting to live a quieter life as a village fisherman and the sole parent to his 10-year old son, Helius.
Meanwhile, a struggle for supremacy rages between the gods and the Titans. Dangerously weakened by humanity’s lack of devotion, the gods are losing control of the imprisoned Titans and their ferocious leader, Kronos, father of the long-ruling brothers Zeus, Hades and Poseidon. The triumvirate had overthrown their powerful father long ago, leaving him to rot in the gloomy abyss of Tartarus, a dungeon that lies deep within the cavernous underworld.
Perseus cannot ignore his true calling when Hades, along with Zeus’ godly son  Ares, switch loyalty and make a deal with Kronos to capture Zeus.
The Titans’ strength grows stronger as Zeus’ remaining godly powers are siphoned… “ 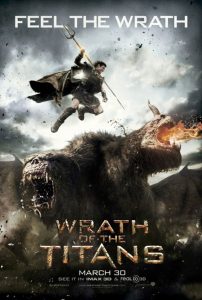