So it’s back to the arena, where life is cheap but the production values sure as hell are not. In THE HUNGER GAMES: CATCHING FIRE, defiant champions Katniss Everdeen (Jennifer Lawrence) and Peeta Mellark (Josh Hutcherson) discover how costly their rebellion actually is, both in terms of human toll as the government moves to crush any signs of rebellion inspired by their victory, and personally, as the ruling elite — represented by the likes of Donald Sutherland and Philip Seymour Hoffman — conspire to force them into a new, even more deadly competition.
beabetterbooktalker.com‘s Andrea Lipinski is back once again to share her knowledge of the original book series with Cinefantastique Online’s Steve Biodrowski, Lawrence French, and Dan Persons. We’ll look into whether there’s story enough to support two-and-a-half hours of screen time, whether the return to the bloody Hunger Games competition is worth the trip, and whether all the characters have a preternaturally intimate understanding of human nature or are just damn lucky. Then, Dan and Andrea quickly discuss the celebratory DOCTOR WHO 50th anniversary episode, “Day of the Doctor.” Plus: What’s coming to theaters next week.

Fox has ordered pilot of Alan Moore steampunk comic… TEXAS CHAINSAW 3D producers to do DAY OF THE DEAD remake… Turkeys throw off the yoke of Thanksgiving to become FREE BIRDS…
From the luxurious Cinefantastique Online studios in NYC, Dan Persons brings you up-to-date on what’s happening in the world of fantastic film & TV.


Hunger will compel people to some extreme acts: lie; kill; volunteer your child to appear on TODDLERS & TIARAS. Who knew it could also lead to one of the best movies of the year? The highly anticipated THE HUNGER GAMES takes the first book of the popular young adult series — about a dystopic future where the working masses are kept under control by being forced to sacrifice their children to a high-tech, to-the-death, televised battle — and turns it into a top-notch entertainment. Plus, in the person of Katniss Everdeen (Jennifer Lawrence) — a combatant whose behavior amidst the carnage may be a harbinger of change — audiences finally get a more palatable and compelling heroine than a certain, vampire-besotted star of another series.
beabetterbooktalker.com‘s Andrea Lipinski joins Cinefantastique Online’s Steve Biodrowski and Dan Persons to explore the fine points of the film: What might have been lost in the transition from page to screen; how does director Gary Ross reconcile the carnage of the battle sequences with the more satirical vision of the ruling elite; and what’s scarier, the prospect of being torn to bits by raging, genetically-engineered hell-hounds, or Stanley Tucci’s hair? All this and more will be discussed in the show. Plus: What’s coming to theaters and home video.
REGRETTABLE TECHNICAL NOTE: Conversation about a film this good is hard to contain, which is another way of saying that the running time of show forces us to reduce the audio quality slightly for convenience sake. 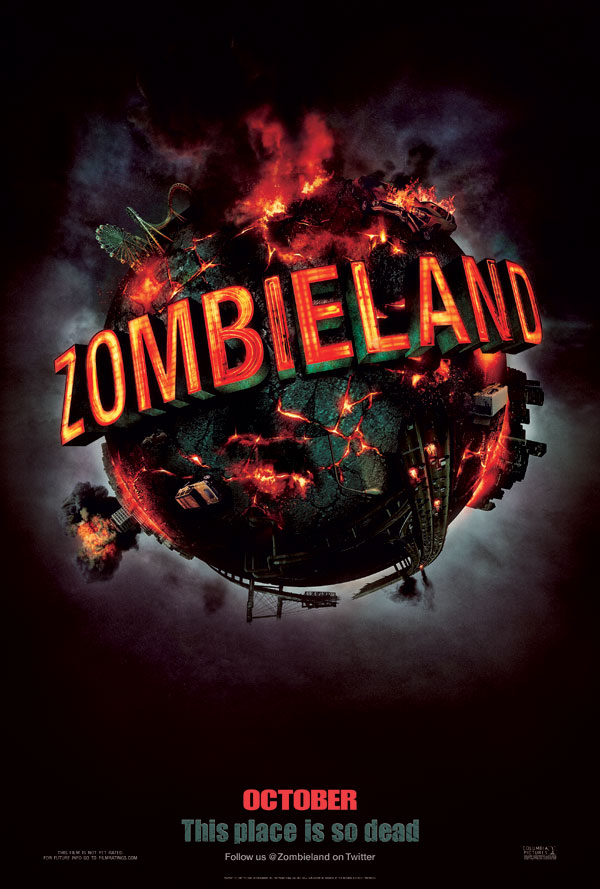 Often it is all too easy to be swept up in the excitement of the moment, giddy with glee over a new discover – only to find, after sober reflection, that the initial rush of joy was a bit over-stated. The passage of time has a way of lending perspective missing from the initial encounter, and that seems to be the case with ZOMBIELAND, which was a big commercial hit when it opened last October. The success is easy enough to understand: the film has a likable cast of characters carefully crafted to appeal to the target demographics; the basic premise is promising; and the combo of horor and humor is appealing. In a theatre full of eager fans, primed for the Halloween season, it is easy to imagine that the post-apocalyptic zombie scenario – loaded with bloodshed and action, but leavened with a tongue-in-cheek tone to prevent the scares from being too disturbing – would leave audiences as thrilled as horde of cannibal zombies at a train wreck. However, after the initial excitement wears off, a viewing of ZOMBIELAND on home video reveals that the film is enjoyable but hardly brilliant. Mildly enjoyable throughout, it has only a handful of must-see moments that would justify a second viewing, and almost all of them are available in previews and clips you can watch on YouTube. This is truly a film that has a hard time competing with its own trailer.


What ZOMBIELAND has going for it is the amusing idea of an apparent loser nicknamed Columbus (Jesse Eisenberg), who has managed to survive a plauge that has turned most of the world’s population into “zombies.” Far from the typical movie hero, “Columbus” lives by a series of rules (superimposed in subtitles throughout the film (rather like the GUI effects in STRANGER THAN FICTION) that prevent him from making obvious mistakes; for instance, he always “double taps” the zombies he kills (meaning he delivers a second shot to the head, just to make sure they stay down).
Columbus forms an unlikely partnership with Woody Harrelson’s Tallahasse (“I’m not the easiest person to get along with, and I”m sensing you’re a bit of a bitch”), and the two soon encounter a pair of young con-women (Emma Stone and Abigail Breslin), who steal their vehicle before eventually having a change of heart and teaming up. Showing a vestige of the script’s origins as an intended television pilot, the storyline is less about zombies than about forming a surrogate “family,” because even though the Reaganite ’80s are long gone, family values are still a safe way to achieve mass audience appeal.
Stone and Breslin are adequate, and Eisenberg is reasonably funny (if occasionally a bit too convincing) as the geek. But Harrelson is the one who comes closest to achieving ZOMBIELAND’s full potential. He can do the tough-guy hero stuff, and he can tell a joke; he can also handle the film’s occasional attempts at pathos.
It is to ZOMBIELAND’s credit that it tries to blend several tones, but occasionally the mix is muddled or downright silly. In the low point, [SPOILER AHEAD] Bill Murray makes a cameo as himself: having survived by making himself up to look like a zombie (zombies do not attack each other), he for some reason thinks it would be a very funny joke to sneak up on a pair of well-armed characters, who mistake him for the real thing – with predictably disastrous results. You see the joke coming from so far away that it makes Murray look like a moron. After this kind of idiocy, it is difficult to work up much of a lump in one’s throat over the story’s sentimental moments.

It is also a bit disappointing that ZOMBIELAND features no actual zombies. These so-called zombies are not the walking dead but all-too-living victims of a ghastly plague (like the one in 28 DAYS LATER). This is basically a writer’s device that makes the script easier: humans can turn into “zombies” quickly (without having to actually die); the “zombies” can run (because they’re not dead so they are not decomposing); and they can be easily killed without having to worry about the head-shot that has been a tradition since NIGHT OF THE LIVING DEAD in 1968.
This may seem like a small point, but it’s symptomatic of the film’s take-the-easy-route approach: go for the broad, multiplex-safe approach. As long as you don’t expect too much, ZOMBIELAND works well enough in an amiable, funny-scary kind of way, but the film could have been even better with a little more bite – if not literally, than figuratively and satirically.


The DVD presentation of ZOMBIELAND offers a solid widescreen trasnfer and good sound, along with numerous bonus features: trailers, featurettes, audio commentary, and more.
Theatrical Promo Trailers: There are five of these, which consist of Woody Harrelson and Jesse Eisenberg doing stand-up routines, pretending to answer viewer questions about zombies:

Visual FX Progressions: These are four brief bits, featuring before-and-after footage from ZOMBIELAND’s visual effects scenes – first the live-action as filmed on set or location, then the computer-generated enhancements. It is interesting to note that most of the blood was added via CGI, and scenes of zombies being clobbered were achieved by having actors swing only the handle, for example, of a baseball bat, with the rest added in post-production. The four scenes are:

Deleted Scenes: These are mostly brief snippets rather than complete scenes. One specifically states something unspoken in the film, that these zombies are plague victims, not walking corpses. Another scene explains the change of heart that the two young women undergo after scamming our two heroes – a plot point that is taken for granted in the final cut. The deleted scenes are:

Featurette: “In Search of Zombieland”:This is a standard promotional featurette disguised as a making-of piece, combining interview soundbites with footage from the film. It’s no worse than most – except for the stupid gag of having one of the zombies give a talking-head interview that consists of inarticulate grunts and growls.
Featurette: “Zombieland Is Your Land”: This is a much more informative look behind the scenes, focusing on the use of set design, locations, and art direction to convey a post-apocalyptic landscape.


Audio Commentary: Director Ruben Fleischer, stars Harrelson and Eisenberg, and writers Rhett Reese and Paul Wernick get together to chat about making their film. Like most audio commentaries recorded too soon (i.e., while the film is still in release), this one suffers from a lack of perspective on the work, with everyone in full-bore promotional mode, repeatedly mentioning that ZOMBIELAND is currently numero uno at the box office. If you can stomach the continual back-patting (“We are very self-satisfied people,” Fleischer notes repeatedly), there are some interesing tidbits, such as the fact that the “Zombie Kill of the Week” concept (so prominent in the trailer) is a vestige of the script’s gestation as a pilot for a weekly television series – which would have included a “Zombie Kill of the Week” in each episode.
“Woke Up Dead” is a weird, four-minute comedy episode about a guy hit by a truck who wakes up on the coroner’s table. It has no connection with ZOMBIELAND; although presented as a bonus feature, it is basically a promo for a later DVD release, which will presumably include many more episodes.
ZOMBIELAND (2009). Directed by Ruben Fleischer. Written by Rhett Reese & Paul Wernick. Cast: Woody Harrelson, Jesse Eisenberg, Emma Stone, Abigail Breslin, Amber Heard, Billy Murray.