According to JoBlo.com, the proposed VOLTRON live-action movie seems to be gaining momentum. They say Altas Entertainment appears to have hired the screenwriters of the new CONAN movie,  Thomas Donnelly and Joshua Oppenheimer, to write a script.
They’ve also commissioned concept art, the first of which can be seen here. 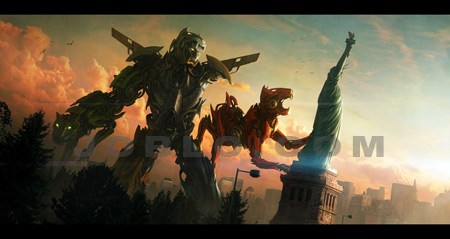 See the article linked above for a larger versison of this artwork, and a second piece that appears to be an adversary for Voltron and company.

MTV’s Splash Page reports that a live-action VOLTRON feature film is still in the works.
It seems that earlier in the week, the news that a new, “edgier” animated series was on the way, and that a toy deal with Mattel has been struck gave the impression that the plans for a film had been abandoned.
VOLTRON producers Ted Koplar (VOLTRON: THE THIRD DIMENSION [1998]) and Richard Suckle (SCOOBY-DOO 2) told the site that the live-action feature is an active project, and that they were in talks with a un-named writer for a new screenplay.
The producers explained their philosophy:

“KOPLAR: The whole show is about teamwork — about a group of kids with various backgrounds who learn that the only way they’ll succeed is through the positive parts of each one’s background and bringing it together to make the robot work.
SUCKLE: It’s not like we’re doing anything far different from the source material other than to make it a character-driven film. The effects, the 3-D… The eye candy is the easy part. It’s got to be a movie that has really dynamic, interesting characters and a really strong narrative. You know the eye candy is going to be there, because it’s part of the fabric of the original material.
So that character-driven element is really what we’re focusing on, and that’s what the writers that we’ve been talking to have been told about what we want and what we’re looking for.”

The producers hope for a Summer, 2013 release.
See the link above for the entire interview.
The little I know about Voltron, I got from ROBOT CHICKEN…