This gangster is haunted, literally. KEYHOLE begins with an inversion — a group of criminals have to fight their way past a police barricade into a house — and only gets stranger from there. Turns out their boss Ulysses Pick (Jason Patric), isn’t after any kind of swag, but an exorcism of the past. The house is his own, riddled with ghosts, and Pick — with a willing mystic and an unwilling kidnap victim in tow — seeks to contact these remnants of a shaded, violent past, including his wife (Isabella Rossellini), possibly to banish them forever.
KEYHOLE is another stylish, enigmatic examination of the human soul by the Canadian master of such, Guy Maddin. Shot (mostly) in black and white, with a noirish tone, a script co-written by Maddin and frequent collaborator George Toles, and key performances by Udo Kier and KIDS IN THE HALL’s Kevin McDonald, the film’s a strange and poetic examination of how the sins of the past can linger forever, and what it might cost to revisit them.
Maddin’s one of my favorite interviews, and I’m glad to finally get him on the podcast. Click on the player to hear our conversation.

It’s a good week for lush, exquisite cinematography and vividly stylized worlds; maybe not so good a week for compelling narratives. In IMMORTALS, director Tarsem Singh Dhandwar uses Greek mythology as the raw material upon which to invest his skill with staging beautiful, beautiful actors in elaborate tableaux, all in the service of the tale of a lowly peasant (Henry Cavil) who, with the blessings of the gods (including former Apollo Luke Evans), rallies the bedraggled forces of Greece against a sadistic warlord (Mickey Rourke, and are you surprised?). Come join Cinefantastique Online’s Steve Biodrowski, Lawrence French, and Dan Persons as they admire the scenery and debate whether anything exists past the pretty facade.
Then, Larry and Dan briefly discuss the strengths and weaknesses of Lars von Trier’s elegant science fiction drama, MELANCHOLIA, in which a despondent Kirsten Dunst must cope with her own sense of inertia and the threat of a rogue planet on a collision course with Earth. Plus: What’s coming in theaters. 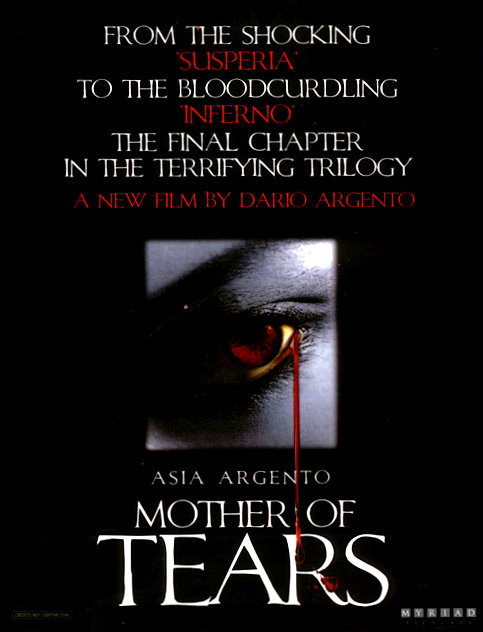 Cinematic horror has a relatively easy time portraying the visceral, but there is more to the genre than Grand Guignol gore. There is also a metaphysical aspect that might, in its simplest formulation, be distilled down to a fairy tale battle between opposing forces of Light and Darkness, Good and Evil. This second aspect of the horror genre is harder to film; after all, how do you photograph an abstraction? (It is obviously much easier to film a knife sinking into a torso.) With SUSPIRIA and INFERNO, Italian filmmaker Dario Argento took a stylized (metaphoric) stab at conveying the unseen presence of “magic…all around us, everywhere,” using deliberately artificial lighting schemes and eccentric camera angles (buildings reflected in puddles, people reflected in buildings) to suggest a parallel world of strange and sinister forces lurking somewhere behind what we call “reality.” THE MOTHER OF TEARS, the concluding chapter of Argento’s “Three Mothers” trilogy, dispenses with the overt stylization of its predecessors (which seemed to take place in some kind of adult fairy tale) in favor of a sobering dose of realism. Ironically, this more prosaic approach turns out to be even more effective at portraying a profound metaphysical horror lurking behind the physical violence on screen. Evil is no longer confined to one of Varelli’s architectural monstrosities; it walks the streets of Rome by daylight, infecting those it touches, creating a eruption of senseless violence that seem to signal the coming of the Apocalypse. END_OF_DOCUMENT_TOKEN_TO_BE_REPLACED