Mike Fleming at Deadline New York reports that Kirsten Dunst (SPIDER-MAN) will be taking the lead role in Danish director Lars Von Trier’s $7-million science-fiction disaster film, MELANCHOLIA, which is about a giant planet on a collision course with Earth. Dunst is replacing Penelope Cruz, who jumped ship to appear in PIRATES OF THE CARIBBEAN: ON THE STRANGER TIDES – which is good news for MELANCHOLIA and not so good news for the PIRATES sequel (although why anyone would expect anything good out of that overblown franchise at this point is anyone’s guess).
Von Trier – perhaps jokingly – promised “no…happy endings” for the film. His producer says:

The film will be “a mix of spectacular, cinematic imagery with Dogme-style hand-held camerawork,” according to producer Peter Aalbaek Jensen. And “romantic, in a Lord Byron sort of way.” 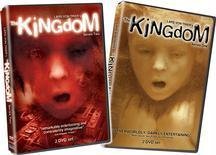 As mentioned in this week’s Laserblast, THE KINGDOM and THE KINGDOM 2 have been issued on Region 1 DVD in the U.S. (KINGDOM was previously available, but KINGDOM 2 was virtually MIA in the states.) Although these two titles (which have nothing to do with the 2007 film directed by Peter Berg) were released to American art houses, they are not really feature-length movies but mini-series strung together for theatrical presentation. “Lynchian” is the adjective that comes inevitably to mind: although series mastermind Lars Von Triers is not a fan of director David Lynch in general, he has cited TWIN PEAKS as a major influence for these 1990s efforts. Set in the hospital of the title, the soap-opera style-story includes a mix of melodrama, mysticism, and black comedy Lynch’s cult-fav TV show. The labyrinthine plot and subplots are too complicated to detail; suffice to say that the main threads involve an old woman who keeps getting herself admitted not because she is sick or a hypochondriac but because she is a medium who senses restless spirits at work in the hospital.
THE KINGDOM (“Riget,” 1995) introduces us to the setting and the cast of characters, including an angry Swedish doctor who resents working in Denmark (he periodically goes up to the rooftop where he can vent his rage in angry soliloquies). Many of the other characters also emphasize humor, but never so much that the sinister undertones are drowned out. The various comic threads lead a to a hilarious conclusion, as all the eccentric activities seem to be peaking just as a hospital inspection is taking place.

Perhaps the strongest (and most serious) plot-line involves the “hypochondriac” medium, who ends up investigating the restless ghost of a little girl. The gradual unraveling of this mystery helps hold together some of the other frivolous activities, leading to an absolutely horrifying climax (involving the ghastly rebirth – a la THE WITCHING HOUR – of the girl’s murderous father, played by Udo Kier) that leaves the door open for the subsequent series.
THE KINGDOM 2 (“Riget 2, 1997) picks up the story and plays it out with variations. (For example, the crabby Swedish doctor, instead of venting on the rooftop, lurks in the restroom, lamenting that his stools do not float in the toilet water.) The unnatural baby from the end of Part 1 is revealed not to be the evil father but a look-alike son, whose limbs grow at an abnormal rate; unable to support their own weight, these stick-like appendages end up in traction, as the unfortunate child begs its mother to end its life – not to put him out of his misery but to thwart the plans of his ghostly father.
Unfortunately, KINDGOM 2 is much more slack-paced than its predecessor. The comic sub-plots are not so interesting, and they grow frequently annoying as the pull us away from the parts of the story that we want to see. Still, there are couple of good horror scenes, and the story does take some unexpected twists. One previously sympathetic character, after being mistaken for dead and nearly cremated, emerges psychologically the worse for wear, ranting about sick people on artificial life support – he thinks the plug should be pulled on all of them. The script contrives to put at the controls of the hospital’s emergency power – during a blackout!
One of the advantages of the television-style structure is that both KINGDOM and KINGDOM 2 frequently build to bizarre climaxes, whose implications do not have to be fully resolved; a cutaway to the episode’s closing credits provides breathing room for the viewer to reset before next week’s events unfold. Thus, both mini-series are filled with bizarre vignettes, like the phantom ambulance that always arrives at a certain time of night but never actually enters the ambulance bay. (This apparently ghostly apparition is eventually revealed as a prank, wiht different members of the hospital staff taking turns at driving, but just when it seems that the supernatural element has been debunked, the latest driver is startled to find an unexpected passenger beside him – Death!)
Occasionally, the TV origins betray themselves, especially with two dishwasher characters (Vita Jensen and Morten Rotne Leffers) who never interact with the rest of the cast. They simply recount the goings-on, presumably to bring viewers up to date. This may have been useful when watching one-hour episodes on aweekly basis, but their function seems less important when viewing the entire storyline in one sitting. And the multi-story structure wears thin in KINGDOM 2, with new plot threads interrupting the continuing stories from the first mini-series. Even so, THE KINGDOM provides the kind of treatment that fans of cinefantastique will definitely enjoy.
On DVD, THE KINGDOM – Series One and THE KINGDOM – Series Two are available separately. The have also been packaged together as a set.
CREDITS. Directors: Morten Arnfred, Lars von Trier. Writers: Tomas Gislason, Niels Vorsel, Lars von Triers. Cast: Ernst-Hugo Jaresgard, Kirsten Rolffes, Holger Juul Hansen, Soren Pilmark, Ghita Norby, Jens Okking, Otto Brandenburg, Annevig Schelde Ebbe, Baard Owe, Birgitte Raaberg, Peter Mygind, Udo Keir.