The Fox Network announced its FALL 2011 and MID-SEASON 2012 Schedules. FRINGE will continue at 9:00 -1o:00 PM on Fridays. The new genre (or borderline) shows are as follows.


TERRA NOVA
— “From executive producers Steven Spielberg (Saving Private Ryan, Jurassic Park), Peter Chernin, René Echevarria (Castle, The 4400) and Brannon Braga (24) comes an epic family adventure 85 million years in the making. TERRA NOVA follows an ordinary family on an incredible journey back in time to prehistoric Earth as a small part of a daring experiment to save the human race. In the year 2149, the world is dying. The planet is overdeveloped and overcrowded, with the majority of plant and animal life extinct. The future of mankind is in jeopardy, and its only hope for survival is in the distant past.
When scientists at the FERMI Particle Accelerator unexpectedly discovered a fracture in time that made it possible to construct a portal into primeval history, the bold notion was born to resettle humanity in the past – a second chance to rebuild civilization and get it right this time.
The series centers on the Shannon family as they join the Tenth Pilgrimage of settlers to Terra Nova, the first colony established in this beautiful yet foreboding land. JIM SHANNON (Jason O’Mara, Life on Mars), a devoted father with a checkered past, guides his family through this new world of limitless beauty, mystery and terror. Jim’s wife, ELISABETH (Shelley Conn, Mistresses), is a trauma surgeon and the newest addition to Terra Nova’s medical team. JOSH (Landon Liboiron, Degrassi: The Next Generation) is their 17-year-old son who is angry to leave life as he knows it behind; upon arriving at the settlement, he finds himself instantly drawn to the beautiful and rule-breaking SKYE (Allison Miller, Kings). MADDY (Naomi Scott, Life Bites), Josh’s endearingly awkward 15-year-old sister, hopes Terra Nova will give her a chance to reinvent herself. Although Elisabeth’s medical training secured the family a spot on the pilgrimage, a secret involving their five-year-old daughter, ZOE (newcomer Alana Mansour), soon endangers their place in this utopia. Upon the Shannons’ arrival, they are introduced to COMMANDER NATHANIEL TAYLOR (Stephen Lang, Avatar), the charismatic and heroic first pioneer and leader of the settlement. Taylor warns the travelers that while Terra Nova is a place of new opportunities and fresh beginnings, all is not as idyllic as it initially appears.
Along with blue skies, towering waterfalls and lush vegetation, the surrounding terrain is teeming with danger – and not just of the man-eating dinosaur variety. There is also a splinter colony of renegades led by the battle-hardened MIRA (Christine Adams, TRON: Legacy), who is vehemently opposed to Taylor and his leadership. Even more threatening than what lies outside the protective walls of the colony is the chilling possibility that something sinister is happening inside Terra Nova. The Shannons will come to suspect that not everyone on this mission has the same idea of how to best save mankind; in fact, there may be forces intent on destroying this new world before it even begins.
To Air MONDAYS 8:00-9:00 PM  FALL 2011 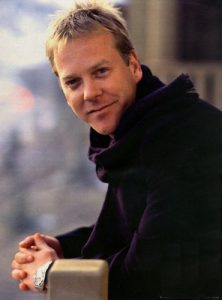 TOUCH — “From writer/creator Tim Kring (Heroes, Crossing Jordan) and executive producers Peter Chernin and Katherine Pope comes TOUCH, a preternatural drama in which science and spirituality intersect with the hopeful premise that we are all interconnected, tied in invisible ways to those whose lives we are destined to alter and impact.
Through masterful storytelling, the series follows a group of seemingly unrelated characters – beginning with a former firefighter tormented by his inability to save a dying woman, an Iraqi teenager who will go to great risks to help his family, a gifted singer whose actions at a karaoke bar save lives thousands of miles away and a British businessman desperately trying to retrieve a key piece of information from his lost mobile phone – who affect each other in ways seen and unseen.
At the center is MARTIN BOHM (Kiefer Sutherland, 24), a widower and single father, haunted by an inability to connect to his mute, severely autistic 10-year-old son, JAKE. Caring, intelligent and thoughtful, Martin has tried everything to reach his son who shows little emotion and never allows himself to be touched by anyone, including Martin. Jake busies himself with cast-off cell phones, disassembling them and manipulating the parts, allowing him to see the world in his own special way.
After multiple failed attempts at keeping Jake in school, Martin is visited by social worker CLEA HOPKINS, who insists on doing an evaluation of the Bohms’ living situation. Although new at her job, Clea sees a man whose life has become dominated by a child he can no longer control. She believes his attempts to communicate with Jake are just wish fulfillment, and determines that it’s time for the state to intervene.
But everything changes when Martin discovers that Jake possesses a gift of staggering genius – the ability to see things that no one else can, the patterns that connect everything. Jake is indeed communicating after all. But it’s not with words, it’s with numbers. And now he needs Martin to decipher their meaning and connect these numbers to the cast of seemingly unrelated characters whose lives they affect.
Along the way, Martin will be guided by BORIS PODOLSKY, a discredited aging professor who offers Martin a compelling but unorthodox theory about Jake and his rare ability. Whether it be chance, coincidence, timing, synergy or fate, there are events that touch us all, as part of an interconnected, dazzlingly precise universe.
Expected MID-SEASON, Day and Time not yet scheduled.
PRODUCTION COMPANIES: 20th Century Fox Television, Tailwind Productions, Chernin Entertainment
CREATOR/WRITER: Tim Kring
DIRECTOR: Francis Lawrence
EXECUTIVE PRODUCERS: Tim Kring, Francis Lawrence, Peter Chernin, Katherine Pope, Kiefer Sutherland, Suzan Bymel
STARRING: Kiefer Sutherland, other casting TBA.