Homicidal maniac in a well-crafted movie: great entertainment. Homicidal maniac in an actual movie theater… Cinefantastique Online’s Steve Biodrowski, Lawrence French, and Dan Persons grapple with the horrific news out of Aurora, discussing whether and how it should relate to the film that was being screened, Christopher Nolan’s THE DARK KNIGHT RISES, and also how these events should affect Spotlight’s geekly mandate of discussing the film in-depth.
Then, they do go on to analyze Nolan’s final chapter to his universally celebrated Batman trilogy, evaluating how the decision to keep the Batman (Christian Bale) off-stage for long stretches of the film effect our expectations, whether the choice of Bane (Tom Hardy) and Catwoman (Anne Hathaway) as villains gave the masked crimefighter a suitable roster of adversaries, and whether this last tale provides a fitting summation to the themes established and explored from the very first film. 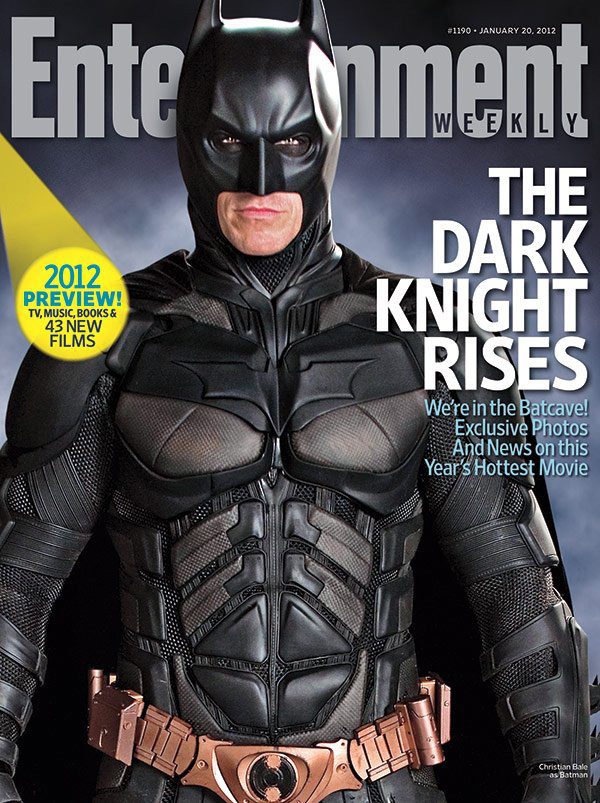 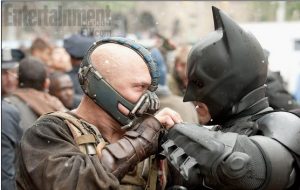 A big battle scene for THE DARK KNIGHT RISES was shot on location in Pittsburg, on and around the campus of Carnagie Mellon’s Mellon Institute.

Christan Bale as Batman and Tom Hardy as Bane were there, coming to grips with each other, as were (reportedly) Joseph Gordon-Levitt, as Gotham City policeman John Blake and Marion Cotillard as Miranda Tate, Wayne Enterprises employee.


Three military-painted Tumblers (the vehicle used as the Batmobile) were also sighted, with Hardy’s Bane atop one in one photo.


As Bane and others are wearing winter coats, I think we can assume that the material falling is supposed to be snow, rather than ash or debris.

Batman News.com supplied this video of Tom Hardy (STAR TREK: NEMESIS,  INCEPTION) fron the UK talk show ALAN CARR: CHATTY MAN.
Hardy advised that his interpetation of the powerful villain Bane will not be in the campy vein of BATMAN & ROBIN (1997), and dodged the question of whether the character will wear a mask in THE DARK KNIGHT RISES.
Tom Hardy did confirm that he will be putting on muscle mass for the part over the next three months, before shooting begins in May for the Christopher Nolan film.

Christopher Nolan stated, “I am thrilled to have the opportunity to work with Anne Hathaway, who will be a fantastic addition to our ensemble as we complete our story.”


In addition, Tom Hardy has been set to play Bane. Nolan said, “I am delighted to be working with Tom again and excited to watch him bring to life our new interpretation of one of Batman’s most formidable enemies.”

Nolan will direct the film from a screenplay he wrote with Jonathan Nolan, from a story by Christopher Nolan and David S. Goyer. Nolan will also produce the film with his longtime producing partner, Emma Thomas, and Charles Roven. “

The Dark Knight Rises” is slated for release on July 20, 2012. The film will be distributed worldwide by Warner Bros. Pictures, a Warner Bros. Entertainment Company.

So Catwoman and Bane, huh? Could work.
Catwoman has appeared in the `60’s BATMAN television, show, spin-off movie, and BATMAN RETURNS, as well as cartoons.  (A non-Selina Kyle heroic version was showcased in CATWOMAN.)
Bane appeared in a less- than -faithful fashion in the widely reviled BATMAN AND ROBIN, appearing as a scientifically-powered inarticulate brute.
Casting the British Tom Hardy as the character is somewhat unexpected. In the comics, Bane is supposed to be from a Caribbean prision, and speaks with a Hispanic accent, though he is surprisingly intelligent and literate for a long-term inmate. Using the addictive super-steriod Venom,  he was transformed into a inhumanly strong killer.
He’s clever enough to keep the Batman on the run, by releasing crimminal lunatics from Arkham Asylum, while also deducing his secret identity, and eventually breaking the Dark Knight’s back in a fight. (Knightfall)
How this will play out in THE DARK KNIGHT RISES is anybody’s guess. 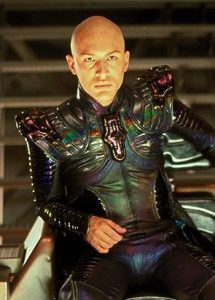 In an interview given to firstshowing.net‘s Alex Billington during a press junket for INCEPTION, British actor Tom Hardy (INCEPTION, BRONSON) discussed his recent casting as the new Mad Max in the upcoming film MAD MAX: FURY ROAD:

“I’m rather, obviously, limited to what I can say. These things are always binded to secrecy and I think that’s a good thing for the film anyway. I’m not allowed to give away anything. Without incriminating myself in any way, it’s a very big film. To step into the shoes of Mel Gibson. George [Miller] and Mel created the franchise Mad Max, which started off as an independent which then blew up. It took off. It became the Mad Max as we know it with t-shirts and DVDs…
There were many, many actors that would probably be right for Mad Max and there’s plenty out there who could probably do an exceptional job to portray him. It’s especially a challenge to step in the shoes of such an iconic character. So obviously I’m aware that I’m going to take a certain level of casualties when I go in and play him. If I concentrate on that, then it’s obviously not going to be the best thing for the project.”

Even though he is set to be the star of the next stage in a major franchise, training won’t be easy as Hardy revealed he is set to lose 30 lbs. on top of a rigorous training schedule.

“I can’t say when I’m going to be in front of the cameras. I’m actually headed tonight to Australia to start some stunt-training. I’m training now. Even though I’m smoking. I’m meant to drop 30 pounds, so smoking and one meal a day is my training at the moment. I’m going to start fighting soon, the harder stuff, when we get close to the line…
[We’re] shooting for probably nine months. The training period is allocated as two months, technically. We don’t know whether it’s going to push a little bit or come up a little bit, we’re in sort of a gray area. There’s various anomalies and shifting papers. All kinds of people’s schedules, from what I’m aware, need to be tied down. The movie is absolutely healthy. So it is going, it’s just a question of, not if, [but] when precisely.”

Check out the complete article here
MAD MAX: FURY ROAD is set to be released in 2012.
[serialposts]