Blood runs thick in TEXAS CHAINSAW 3D, both in its usual, slaughterhouse context, but also in a more symbolic way. Yes, the venerable horror franchise has caught up with the rest of mainstream film, and now it’s all about family, as a surviving — and hitherto unknown — member of the murderous Sawyer clan (Alexandra Daddario) returns to Texas to claim an inheritance from a similarly previously unseen grandmother, and discovers that it includes a living legacy in the form of a certain, Leatherfaced, chainsaw-wielding relative.
Cinefantastique Online’s Steve Biodrowski, Lawrence French, and Dan Persons dipped into the bloodbath that is the first genre release of 2013 and come out, if not impressed, at least appreciative that the film isn’t quite the car wreck that usually gets shunted into the first weekend of January. Click on the player to hear our review. 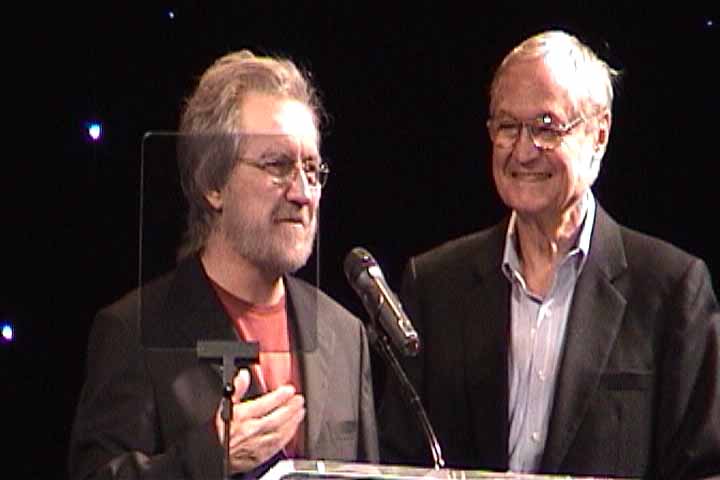 On Friday, October 3, Universal Studios in Hollywood kicked off this year’s Halloween Horror Nights with the Eyegore Awards. As I noted last year, the Eyegores pretty much define “press event”: they’re given away in order to get celebrities to show up, who will in turn attract the press, thus generating a little publicity.
The Eyegore Awards can be a little bit trendy, but at least a couple of this year’s recipients have attained a genuinely legendary status: Roger Corman and Tobe Hooper. Corman produced and directed many horror classics, including THE MASQUE OF THE RED DEATH; Hooper directed the seminal 1974 shocker, THE TEXAS CHAINSAW MASSACRE.
Technically, Corman was a recipient last year, but he didn’t show up to accept his award. This year, he was invited back as a presenter but also took the opportunity to finally pick up his Eyegore statuette.
Other recipients included Gunnar Hansen (who played Leatherface in CHAINSAW MASSACRE), Bill Mosely (who played Chop-Top in THE TEXAS CHAINSAW MASSACRE II), and Julie Benza (DEXTER, ANGEL, SAW V).
The ceremonies were moderated by Corey Feldman (THE LOST BOYS), and at times, it felt like a game of six degrees of separation. Feldman had worked in a movie produced by Corman, whose work inspired Hooper, who cast Hansen and Mosely in his films. Only Julie Benz seemed not to be part of this twisted family tree, her credits of more recent vintage.
In any case, it was nice to see the awards acknowledge some artists work truly has had a measurable impact. Hooper and Corman may not be household names to today’s typical horror fans, but the history of the horror genre would be quite different without them. Trends come and go, but their work has stood the test of time.