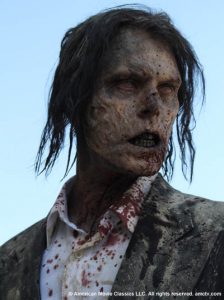 Laurie Holden To Take on The Walking Dead

THE WALKING DEAD television series is set to follow the plot of Robert Kirkman’s comic in telling the story of the months and years that follow after a zombie apocalypse. It follows a group of survivors, led by police officer Rick Grimes, who travel in search of a safe and secure home. Holden will be playing Andrea, a sharp shooter who falls for a man twice her age and Yuen has been cast as Glenn, a young man who saves Rick when he travels to Atlanta.
Both will be joining a cast which includes Andrew Lincoln (ENDURING LOVE, LOVE ACTUALLY) and Jeffrey DeMunn (THE MIST, THE X FILES). Holden (who must have impressed Darabont when she worked with him on THE MIST), in particular, is a brilliant choice to play Andrea as she’s proven herself an actress capable of playing strong, independent women and was impressive in both THE MIST and SILENT HILL.
THE WALKING DEAD starts shooting soon and is due to hit TV screens this October.
May 7, 2010

The Walking Dead Lead is Cast

Last month we reported that Frank Darabont’s AMC zombie TV series, THE WALKING DEAD, had been greenlit and now Comingsoon have the scoop that Andrew Lincoln (ENDURING LOVE, LOVE ACTUALLY) has been cast in the lead role. The announcement from AMC also includes the addition of Jack LoGiudice (SONS OF ANARCHY) as Co-Executive Producer.
Previous reports had Johnny Lee Miller pegged to play the part of Rick Grimes, the leader in a group of survivors trying to stay alive in the wake of a zombie apocalypse, but it seems AMC had other ideas. “Andrew is an incredibly gifted actor. He has the presence and attitude to bring this character and story to life. We are thrilled that he is joining the cast,” Joel Stillerman, SVP of original programming, production and digital content at AMC said.
Robert Kirkman, writer for the comic book series, also had this to add, “Andrew Lincoln, wow — what an amazing find this guy is. Writing Rick Grimes month after month in the comic series, I had no idea he was an actual living breathing human being and yet here he is.” Encouraging words indeed but I just don’t see it as a viable fit. Andrew Lincoln is by no means a bad actor but he hasn’t shown the capability for such an aggressive, messed-up character such as Rick. So far he’s mostly played rom-com fodder but he could, of course, surprise me by displaying range I was unaware he was capable of.
We’ll know for sure when THE WALKING DEAD hits TV screens later this October.
April 7, 2010

Empire Online bring us the news that Frank Darabont’s (THE GREEN MILE, THE MIST) adaptation of zombie comic book THE WALKING DEAD has finally been given the go ahead. Cable channel AMC have apparently granted the series a six episode run, without even needing to see a pilot episode based upon Darabont and Charles Eglee’s (DEXTER) pitch.
Robert Kirkman’s highly popular comic book is set sometime after a zombie apocalypse and follows police officer Rick Grimes and his group of survivors travelling through North America struggling to find a new home.
Rick’s partner Shane has already been cast, with Jon Bernthal (THE GHOST) taking the role and according to Bloody Disgusting, it’s highly likely that Rick himself is to be played by Johnny Lee Miller (TRAINSPOTTING, AEON FLUX). The source material here is of exceptional quality and would serve much better on television that in a single film. Frank Darabont has also shown off his flair for horror with 2007’s THE MIST so the series is definitely one to watch.
THE WALKING DEAD is set to start shooting in June in Atlanta and is most likely to appear on screens in October, as part of AMC’s Fearfest strand.
March 30, 2010