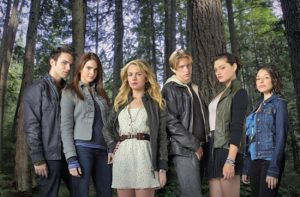 Entertainment Weekly reports that The CW announced early renewals of it’s genre series THE VAMPIRE DIARIES and SUPENATURAL for next season.
VAMPIRE DIARIES is no surprize, as it’s the network’s number one show this year. SUPERNATURAL is holding it’s own, now in it’s sixth season—and since SMALLVILLE has it series finale after ten years on May 13th, a show to anchor the difficult Friday night schedule is much needed.
The fact that both shows are produced by or in association with CW half-parent Warner Brothers Television couldn’t hurt, either.

Here’s the Offical Description and trailer for this week’s new episode of The CW’s THE VAMPIRE DIARIES: ‘Brave New World’.

“When a confused and desperate Caroline (Candice Accola) leaves the hospital and joins her friends at the Mystic Falls Carnival, Damon (Ian Somerhalder) wants to take immediate action, but Stefan (Paul Wesley) and Elena (Nina Dobrev) come to Caroline’s defense.
Matt (Zach Roerig) is completely mystified by Caroline’s behavior, but still tries to tell her about his feelings for her. Damon has suspicions about Tyler’s Uncle Mason (guest star Taylor Kinney) and uses Tyler’s (Michael Trevino) volatile personality in an attempt to get Mason to reveal his secret.
Upset with everything going on around her, Bonnie (Katerina Graham) takes her anger out on Damon.
Steven R. McQueen also stars.
John Dahl directed the episode written by Brian Young.”

THE VAMPIRE DIARIES airs Thursday nights at 8:00 pm/7:00 Central on The CW Network.

Here’s the Official Description of the September 9th Season Premiere of the CW Network’s THE VAMPIRE DIARIES, with the  extended Second Season teaser trailer.
The Return
Picking up on the same night as last season’s finale, Elena (Nina Dobrev) arrives home to a nightmare as she discovers Uncle John’s and Jeremy’s fate. At the hospital, Sheriff Forbes (guest star Marguerite MacIntyre) is comforted by Matt (Zach Roering), Bonnie (Katerina Graham) and Damon (Ian Somerhalder) while she waits to hear if Caroline (Candice Accola) will survive the car accident. After a confusing conversation with Elena about the night’s events, Damon is the first to realize that Katherine (also played by Nina Dobrev) has returned. Katherine’s arrival sends Stefan (Paul Wesley) and Damon on a path to find out what she wants, why she’s back, and how much of a threat she is to the people they love.
Meanwhile, still reeling from his father’s death, Tyler (Michael Trevino) is surprised when his charming and mysterious uncle, Mason Lockwood (guest star Taylor Kinney, “Trauma”), arrives to console the family.
Sara Canning also stars.
J. Miller Tobin directed the episode written by Kevin Williamson & Julie Plec.
THE VAMPIRE DIARIES airs Thursdays at 8:00 p.m./7:oo Central on the CW Network.


Though not as loaded with gruesome goodies as last Tuesday, August 31 offers some exciting horror, fantasy, and science fiction titles on home video, including a DVD box set of DVD of THRILLER hosted by Boris Karloff; a new limited edition Blu-ray disc of Sam Raimi’s THE EVIL DEAD (1982);  and also THE VAMPIRE DIARIES: THE COMPLETE FIRST SEASON, which arrives on DVD and Blu-ray. The later offers an abundant cornucopia for fans of the CW series: four-disc Blu-ray set and the five-disc DVD set run over 900 minutes, with these bonus features:
Anchor Bay’s new limited edition Blu-ray disc OF THE EVIL DEAD is essentially their old three-disc Ultimate Edition DVD condensed down to one Blu-ray disc (which contains two high-def transfers and an all-new audio commentary with director Sam Raimi, producer Robert Tappert, and actor Bruce Campbell) and one DVD (which ports over the old bonus features). The 1080p transfers are presented in anamorphic 1.85 and the original 1.33 aspect ratio, with Dolby TrueHD 5.1 audio. Essentially, this recreated the Ultimate Edition DVD presentation, which also offered widescreen and full-screen transfers (although on separate discs). The only feature missing from the Ultimate Edition DVD is the two audio commentaries: Raimi and Tappert recorded one for the widescreen version; Campbell recorded a separate one for the full-screen version.

For fans of classic horror, the DVD release of THRILLER is big news. The show, which made its debut on NBC way back in September of 1960, has been seldom seen in syndication recently and apparently never available on home video. The 14-disc box set includes all 67 hour-long episodes from the show’s two-season run. Although less well known than THE TWILIGHT ZONE or THE OUTER LIMITS, THRILLER offered similar high-quality episodes, with wonderfully atmospheric black-and-white photography; some great scripts based on classic horror literature; and numerous guest stars, including William Shatner (STAR TREK), Leslie Nielsen (FORBIDDEN PLANET), Robert Vaughn (THE MAN FROM UNCLE), Ursula Andress (DR. NO), Henry Daniel (THE BODY SNATCHERS), Robert Cornthwaite (THE THING FROM ANOTHER WORLD), and more. Bonus features include extensive galleries or production and promotion stills,  promotional clips, isolated music and effects tracks for select episodes, and 27 new audio commentaries. Read more here.

Over a week late, we want to mention GODKILLER: WALK AMONG US [Complete Film DVD], which bears an official release date of August 21 (a Saturday – rare for home video, which usually arrives on Tuesday).  GODKILLER, which deals with human begins engaged in a war among fallen gods, is a so-called “Illustrated Film,” a format coined by Matt Pizzolo and Brian Giberson that dramatizs the comic book story with illustrated voice performances (by Lance Henriksen, Danielle Harris, Bill Moseley, Tiffany Shepis), using  anime-style motion graphics. This DVD includes the entire feature film, unedited, including a brand new bonus epilogue, plus PDF files of the comic book on which the film is based. The film is also available on VOD for rent or purchase.
Also available for rent or purchase this week: CARNIVEROUS with DMX, BRAINJACKED, the RED RIDING TRILOGY, and the Ultimate MACHINE GIRL Collector’s Tin. You can find them all below, or find more in the Cinefantastique Online Store.
[serialposts]