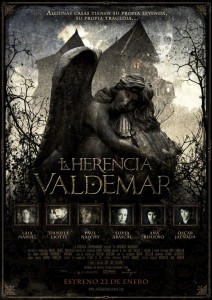 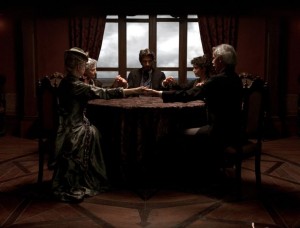 
There is a certain black humor in the notion that the resulting horror not only inspired Bram Stoker to write Dracula; it also gave Lizzie Borden a flash of insight on how to deal with her “family problems.” These esoteric touches may not draw a wide audience, but fans should get a kick out of seeing a film clearly aimed at viewers with their knowledge base. Fans will also be happy to see that Naschy (a cult figure for his many screen appearances as doomed werewolf Count Waldemar Daninsky) is quite good in a non-scary supporting role as the Valdemar’s faithful butler.
If you want to see old-fashioned Gothic horror realized with 21st century craftsmanship, Alemán’s exercise in affectionate nostalgia feels less embalmed than Crimson Peak. A pastiche whose familiarity is part of its appeal, The Valdemar Legacy brings its cliches to life with winning enthusiasm, unhindered by any ambition to reinvent the genre. If not for the narrative missteps, it would be a real gem.
Note: The Valdemar Legacy was – but no longer is – available for streaming through Hulu.com. It can still be found on YouTube, though misleadingly labeled under its sequel’s title, La Herencia Valdemar 2 pelicula completa en español.