Ray Bradbury (Ray Douglas Bradbury) passed away June 5th, 2012. He was 91.
Bradbury was perhaps the best known writer of fantasy and science fiction in the United States. The poetic, literary quality of many of his stories helped improve the reputation of science fiction from its critically dismissed pulp beginnings.
Unlike many writers in the SF genre, Bradbury was not particularly interested in technology or scientific theory; it was the memories and emotions of the characters that he captured so well. He considered himself simply as a writer, and indeed many of his works are mysteries, horror, and other genres. His output counted 27 novels and over 600 short stories. When pressed, Ray Bradbury might call himself a fantasy writer.
Born in Waukegan, Illinois, and spending his early childhood there before moving to Los Angeles, his tales often involved nostalgia, homesickness, characters feeling displaced, and a yearning for simpler times.
Many of his short stories were adapted for radio and early television, on programs such ad X MINUS ONE, LIGHTS OUT, and SUSPENSE. 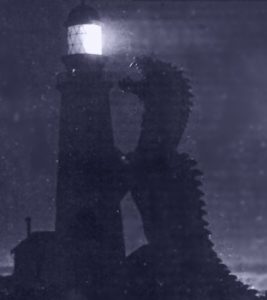 In 1953 he contributed to the story of IT CAME FROM OUTER SPACE, and in a complicated way his Saturday Evening Post story became THE BEAST FROM 20,000 FATHOMS. Only a single scene was used, of the dinosaur attacking a lighthouse. Bradbury would subsequently re-title the story The Foghorn, to set it apart from the film.
BEAST featured the stop motion work of Ray Harryhausen, who was a good friend of Bradbury’s, first meeting at the home of Forrest J. Ackerman. All three were part of SF’s “First Fandom” and among the first genre enthusiasts to make the jump from fan to professional.
Also in 1953, Ray Bradbury  began the screenplay for John Huston’s MOBY DICK (1956), and turned the story of his involvement into the fictionalized Green Shadows, White Whale.
A number of Bradbury’s mysteries were adapted for ALFRED HITCHCOCK PRESENTS from 1956-62.
Surprisingly, given the many thematic similarities between their work, only one of Ray Bradbury’s stories was adapted for Rod Serling’s THE TWILIGHT ZONE: I Sing The Body Electric. This would be later remade as the TV movie THE ELECTRIC GRANDMOTHER (1982).
Bradbury mentioned in later years that he was friendly with Gene Roddenberry, who wanted him to write a STAR TREK episode.  However, he had to turn him down, as Bradbury felt he had no talent for writing to fit other people’s fictional creations.
FAHRENHEIT 451 (1966) was directed by François Truffaut. Despite it’s stilted dialog and performances, Ray Bradbury was fairly pleased with the film, something that would not be true of many of the other adaptations of his work, such as THE ILLUSTRATED MAN (1969) and the TV mini-series THE MARTIAN CHRONICLES (1980). 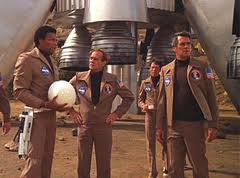 Although Bradbury had consulted with Richard Matheson on the CHRONICLES  teleplay, he publicly announced that the results were “boring” and found fault with the decidedly uneven and dated special effects. Hard to disagree on that point, the whole production seems  bland, unimaginative, and half-hearted.
SOMETHING WICKED THIS WAY COMES (1983) was a better attempt to capture Bradbury’s writing on film, and the film does have it’s moments, though it’s a flawed production.
From 1985 to 1992, over 60 of Ray Bradbury’s stories were adapted for the syndicated RAY BRADBURY THEATER. Some of the Martian Chronicles tales were adapted by the show, and making allowances for  its low budget are as good or better than the network mini-series.
A moderately high budget didn’t help 2005’s A SOUND OF THUNDER, a film I can’t comment on because (like most people, I suspect) it’s one I have never seen. I have heard it called laughingly bad.   That’s a shame—it’s a great short story. Maybe that’s the problem, it’s a SHORT story: Setup, Small Error, Swift Conclusion.  Being inflated into a feature film was probably a mistake.
Still, disappointing adaptations and the desire to revisit them and get them “right” just point to the power and influence of Ray Bradbury’s work.
He will be missed.