This 1896 black-and-white silent horror film from George Melies (the special effects pioneer behind 1902’s A TRIP TO THE MOON) probably yields little gooseflesh for today’s viewers. However, it plays like an overture for the next forty years of horror movie imagery; its brief running time encapsulates such soon-to-be-familiar cinema imagery as old dark castles; flapping bats that transform into human figures; and a brandished cross to ward off the evil being haunting the castle. As always with Melies, believability is less important than amazement – and amusement. Although less overtly comic than some of his films, the occasional whimsical gag works its way in. Unfortunately, the ending seems a bit truncated, but you still get the general idea.
[serialposts] 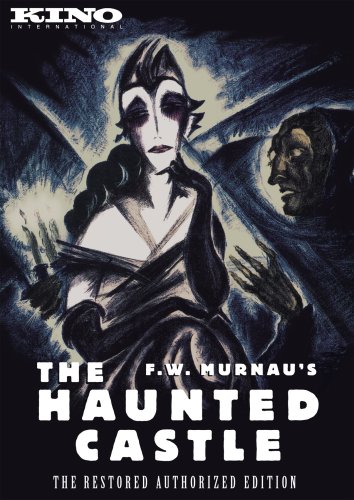 Filmed in 1921, this is a disappointing effort from F. W. Murnau, the director most famous for  helming NOSFERATUA a year later.  Like that over-rated adaptation of Bram Stoker’s Dracula, THE HAUNTED CASTLE is a slow-moving translation of a book (by Rudolf Stratz) that features some memorably creepy moments but fails to justify its running time with its slim plot. Worse, the film never justifies its title: the location where the action is set resembles a mansion more than a castle, and it is most decidedly not haunted. Instead of a silent exercise in expressionistic horror, this is a tedious drama of murder and mystery that depends on a contrived (though mildly amusing) twist ending.
The Story: A group of lords and ladies gathering for a hunting party at Castle Vogeloed, but a damper is put on the festivities by the uninvited arrival of Count Oetsch, who is a social pariah since the everyone believes he murdered his brother three years ago; as if this did not add enough tension, Oetsch’sformer sister-in-law arrives, along with her new husband. It is safe to say no one is going to have a good time under the circumstances; the worst of the lot is the “Anxious Man,” who dreams of a spectral figure reaching through his window at night, prompting him to pack up and leave the next morning. Father Faramund arrives and tries to get Oetsch’s sister-in-law to discuss her husband’s death, but Faramund disappears, and suspicion falls on Count Oetsch. Eventually, the widow reveals the awful truth, which is not what was expected…
THE HAUNTED CASTLE gets off to a dull start, introducing characters one by one as they sit around waiting for the rest of the guests to arrive. Once Count Oetsch shows up and the back story is filled in, the rest of the film is at least able to maintain interest as we wait for the revelation about how Count Oetsch’s brother really died. Unfortunately, mechanics of the mystery are treated too casually by the script. Everyone suspects Oetsch, but no one has openly accused him, and apparently there has been no investigation to determine what really happened.
The story hinges on Farther Faramund getting the widow to talk, but the script offers no clear reason why she would be likely to suddenly reveal everything after three years of maintaining her silence. There is also a surprise twist that is genuinely unexpected, but it raises an obvious unanswered question. (Without giving it away, let’s just say that it’s a surprise to viewers, who don’t know or recognize the characters, but it’s hard to understand how it could be a surprise to the characters themselves).
THE HAUNTED CASTLE is somewhat in the vein of an “old dark house” movie, in which, typically, a group of stuffed shirts gather in an old mansion; spooky stuff happens, and they solve a murder mystery. The difference is that American examples of this form tend to be tongue-in-cheek and offer lots of apparitions and scares, which are eventually revealed to be mechanical effects used by the murderer/culprit to scare away everyone else.
THE HAUNTED CASTLE, on the other hand, has no comic relief to enliven its plodding pace, and the one decent scary moment (which really is quite well handled) is the Anxious Man’s nightmare. Other than that, the film is very much like being trapped at a party where no one is enjoying himself; all you can do is sit there, looking at the clock and imagining how soon you can make an excuse to get away.

THE HAUNTED CASTLE is available on DVD in two different versions. Alpha Video’s discount DVD from August 2008 double bills the film with WOLF BLOOD – which, despite its title, is not exactly a werewolf movie but a melodrama about an injured logger who goes insane after being given a transfusion of wolf’s blood. There are no bonus features, and the video quality of both prints leaves much to be desired; in fact, HAUNTED CASTLE looks so bad that you will find yourself strongly motivated to shut it off and try to obtain the Kino Video DVD instead.
Kino’s March 2007 release offers a new transfer with restored picture. Bonus features are limited to a gallery of set design paintings by Robert Helth and excerpts from the Rudolf Stratz novel, comparing them to the finished film.
THE HAUNTED CASTLE (Schloss Vogeloed, 1921). Directed by F. W. Murnau. Screenplay by Carl Mayer, based on the novel by Rudolf Stratz. Cast: Arnold Korff, Lulu Kyser-Korff, Lothar Mehnert, Paul Bildt, Olga Tschechowa, Paul Hartmann, Hermann Vellantin. Julius Falkenstein.