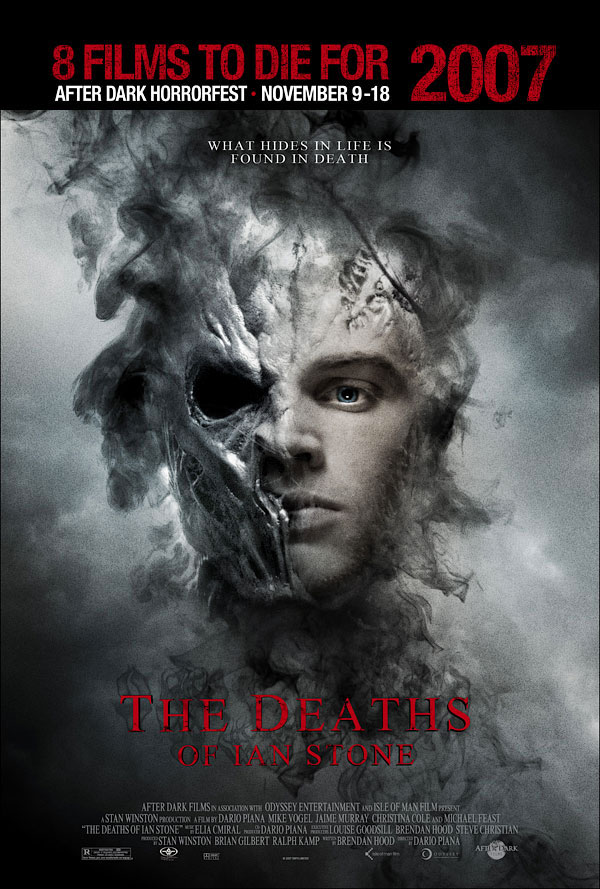 Of the After Dark Horrorfest’s 2007 crop of “8 Films to Die For,” THE DEATHS OF IAN STONE has the most intriguing premise: One night after blowing a big game, high-school hockey player Ian Stone (Mike Vogel) is assaulted by a mysterious assailant and dragged onto a set of train tracks for a sudden-impact death – only to wake up in a new life (now working in an office) that has a strange continuity with his previous existence. If you have read the title, you can probably guess that this will not be the last time Ian meets his death, only to be reborn in a new set of circumstances. The question, of course, is why this is happening, and what can Ian do about it? The search for an answer to this incredible mystery creates a wonderful TWILIGHT ZONE-type of story about an apparently ordinary individual swept up in extraordinary circumstances. The mind-bending shifts in reality (which make us wonder whether this is all happening only inside Ian’s head) conjures up memories of the fiction of Phillip K. Dick, not to mention similar cinematic exercises such as JACOB’S LADDER, 12 MONKEYS, and DARK CITY.
Unfortunately, whereas all of those films had something deeper on their mind (even the misfired LADDER), THE DEATHS OF IAN STONE is content with being a fairly straight-forward genre piece. Consequently, as we gradually learn what is happening (thanks to a Johnny Explainer character who gives Austin Powers’ Basil Exposition a serious challenge for the title of “Obvious Mouthpiece”), the film becomes less interesting. The puzzle pieces of the plot fall into place well enough, but the picture they form is of a conventional monster movie.
As in DARK CITY, where the Strangers were manipulating reality for their own ends, there are dark, demonic forces causing Ian Stone’s condition; unlike DARK CITY, however, DEATHS OF IAN STONE does not use this situation to question the nature of identity. (Are our identities defined by the physical reality in which we live, and what if that reality changes? If our personalities are the result of our experiences – stored as memories – what, if anything, is left if those memories are altered?)


Instead, as in TOTAL RECALL, the premise is used as an excuse to set the plot in motion; exploring the implications is simply not an issue. Also in common with TOTAL RECALL, there is a surprise revelation about the protagonist, in order to explain why the evil forces would resort to such a strange strategy. This leads to a final act showdown wherein Ian confronts the forces that have been tormenting him. The shadowy CGI effects are not bad, but they never quite achieve the shuddery sense of fear they seek to inspire. Even more disappointing is the Stan Winston monster makeup, which has a slightly off-the-rack feel to it.
The result is that the monsters never emerge as memorably iconic figures (you can bet the McFarlane will not be making action collectible figures to set on the shelf alongside the Cenobites from HELLRAISER), and the big finale lacks much in the way of a horrific punch. When Ian finally figures out the secret of how to vanquish his tormenters, it feels like one of those obligatory plot developments, bereft of conviction. It also flirts with the banal. The message, delivered by the Johnny Explainer character – as if he were dispensing the esoteric wisdom of the ages – is that the Power of Love vanquishes the Power of Darkness.
Fortunately, all’s well that ends well. The plot holds attention even when it turns conventional, and the scenario does wrap the story up in an adequate way. The ultimate explanation may be disappointing; nevertheless, you remain engaged enough to want to know what the explanation is.
Vogel and Christina Cole (as a woman swept up in the situation with Ian) do a fine job of staying credible in the middle of an incredible situation. Jaime Murray has a lot of fun as the femme fatale (although she lays on the domineering bitch routine a bit thick at times). Despite a few moments of misplaced bloody violence, the director’s attempt to evoke dread from seemingly inexplicable events creates the kind of uncanny frisson associated with the more sinister TWILIGHT ZONE episodes.
In the end, you have to give THE DEATHS OF IAN STONE credit for having its heart in the right place. It may not be a nightmarish experience in pulse-pounding horror, nor an intriguing exploration of the nature of identity, but it does offer an intriguing journey into an imaginative fantasy scenario, filled with strange surprises. In an era when most horror consists of blunt trauma to the brain, alternating with protracted torture, its nice to see a film with a little bit of ambition aimed at generated a more subtle kind of terror.
THE DEATHS OF IAN STONE (2007). Directed by Dario Piana. Written by Brendan Hood. Cast: Mike Vogel, James Bartle, Andrew Buchan, Christian Cole, Michael Dixon, Jason Durran, Michael Feast, Jaime Murray.
[serialposts]