SMALLVILLE and SUPERNATURAL return from hiatus tonight, Friday, Feb.4th.
Chloe Sullivan (Allision Mack) returns to Metropolis, after her mysterious disappearance, though the captured and  released ‘Justice Leaguers’ are unsure if she can be trusted in Collateral.
On SUPERNATURAL’s Like A Virgin:

“Dean and Bobby anxiously wait for Sam to wake up to see if Death was able to restore his soul without causing Sam to lose his mind. Meanwhile, Dean and Bobby investigate a disappearance of virgins and discover dragons are behind the kidnappings.
Bobby sends Dean to a doctor who owns the only weapon in the world that can slay a dragon, but Dean must prove himself worthy enough to take it.
Phil Sgriccia directed the episode written by Adam Glass.

According to TV Guide, SMALLVILLE is heading to their version of Las Vegas for a big bachelor/bachelorette party for Clark and Lois.
Fortune, due to air  February 25, is what producer Brian Peterson calls “…Our fun HANGOVER episode. Clark won’t remember what happened the night before”, courtesy of an enchanted  bottle of champagne sent by magician Zatanna. 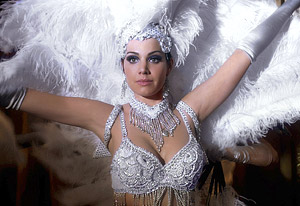 Erica Durance (Lois Lane) reveals “We all wake up in different places in bizarre situations involving weird outfits and animals.
I wake up out on the train tracks with Oliver (Queen, Justin Hartley) and realize I can’t find my engagement ring.”
The ring is in a casino run by supervillian Amos Fortune, and at some point Lois winds up in a showgirl costume. (Big surprise.)
She’d like to sport more conservative attire before the series ends. Assuming we actually see Lois and Clark marry, she said:  “It is my wish to wear a wedding dress. I think that would be a fantastic way to end the series.”
Producer Kelly Souders warns that the approach toward to aisle ” brings out real issues between them… Let’s face it, it’s not easy to be married to Superman!”
The article speculates that the series finale nay be a two-hour episode that brings back Clark’s cousin Kara (Supergirl, played by V’s Laura Vandervoort).
It’s also been confirmed that Zod (Callum Blue) will return at some point before the series’ end.
SMALLVILLE is set to return from hiatus this Friday at 8:00 PM with the new episode Collateral, featuring the return of Chole Sullivan (Allison Mack).

'Smallville' Will NOT Return Tonight

SMALLVILLE returns this Friday with ‘Collateral’.

“Clark, Oliver, Lois and Dinah are released by the VRA (Vigliante Registration Act) after being captured at Hawkman’s funeral but each of them have flashbacks of Chloe (Alison Mack) holding them against their will.

When Chloe returns, Dinah (guest star Alaina Huffman) warns the others that Chloe may now be a traitor. Oliver (Justin Hartley) dismisses her concerns but Clark (Tom Welling) is unsure if he can trust Chloe, after she disappeared without an explanation.
Eric Durance and Cassidy Freeman also star.
Morgan Beggs directed the episode written by Jordan Hawley.

DC Comics’ The Source blog premiered this new CW promotional art for the second half of SMALLVILLE’s 10th and final season, entitled “Destiny is Now’. 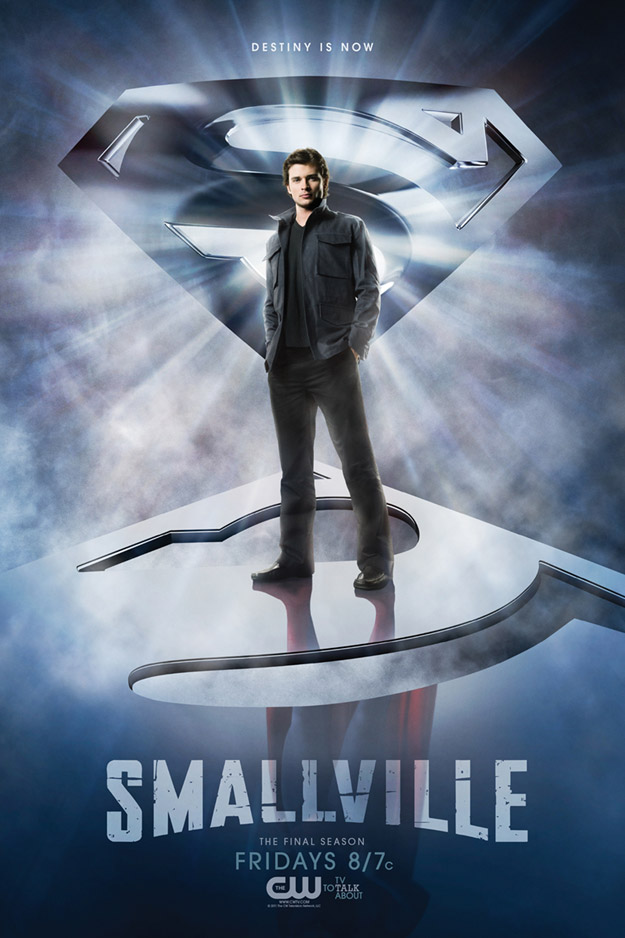 Here’s a preview clip from this Friday’s episode of SMALLVILLE, Icarus, and the offical description:

The VRA (Vigilante Registration Act) is in full effect, and things take an unfortunate turn of events after the Green Arrow (Justin Hartley) tries to stop a mugging, but is attacked by citizens for being a super hero. Clark (Tom Welling) discovers that the civilians who attacked Oliver were all marked with a darkness tattoo.
Carter Hall (SG-1’s Michael Shanks) and Star Girl (Britt Irvin) return to help Clark deal with Slade’s (BSG’s Michael Hogan) re-emergence after he kidnaps Lois (Erica Durance).
Cassidy Freeman also stars.
Mairzee Almas directed the episode written by Genevieve Sparling. 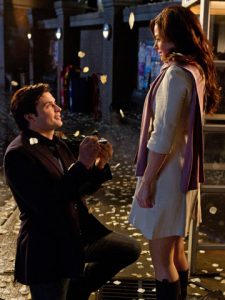 The spoilerific stuff:
Clark Kent proposes to Lois Lane, and this episode may be the last we see of Hawkman on the show. Given the episode title, one might suspect it’s a dramatic exit. Time will tell.
This is the mid-season finale; the show wont be back until 2011.
SMALLVILLE airs Friday at 8:00 PM/7 Central, followed by a new episode of SUPERNATURAL, Appointment In Samarra. 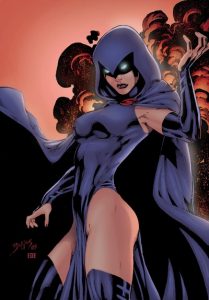 In this week’s new episode of SMALLVILLE, Luthor, former regular John Glover returns as Lionel Luthor—but with a twist, as the character was previously killed off a few years back.

Tess (Cassidy Freeman) acquires a Kryptonian box that once belonged to Lionel Luthor (John Glover). When Clark (Tom Welling) accidentally activates the box, he’s transported to a parallel universe where Lionel found Clark in the cornfields instead of the Kents.
In this universe, Clark Luthor is a murderer and Lois (Erica Durance) is engaged to Oliver (Justin Hartley) and both of them hate Clark.
Clark must be careful not to tip off Lionel that he’s not his son while trying to figure out how to get back to Earth where the monster Clark Luthor was transported in his place.
Executive Producer Kelly Souders directed the episode written by Bryan Q. Miller.

TV GUIDE features an interview with SMALLVILLE producers Brain Peterson and Kelly Sounders in which they revealed the following:
As hinted in previous episodes, Clark (Tom Welling) intends to propose to Lois Lane (Erica Durnace). This will happen within the next three episodes, according to Brian Peterson. They won’t say if viewers will see a wedding, but they will see Lois making plans, which will be  “a bit of a ride in and of itself”.
Martha Kent (Annette O’Toole) will return, trying to protect Clark from the Vigilante Registration Act.
Last week’s revelation of Tess Mercer (Cassidy Freeman) actually being Lutessa Lena Luthor will be s storyline that continues throughout the season.
Lionel Luthor’s (John Glover) return in the episode “Luthor” takes place in an alternate universe. (One that will apparently reference a specific alternate Earth from the comics.)
Chole Sullivan’s will return in a dramatic way. “Certainly the Chloe fans will have a lot to sink their teeth into,” confided Kelly Souders.
See more SMALLVILLE info at the link above.
SMALLVILLE airs a new episode Patriot tonight at 8:00 PM/7 Central on The CW Network.

In an effort to protect the rest of the team, Oliver (Justin Hartley) decides to register for the Vigilante Registration Act to see what the government plans to do with the new law. As he suspected, it was a trap to lure superheroes to an undisclosed location where he is confined to a jail and subjected to a battery of brutal tests under the supervision of Col. Slade (guest star Michael Hogan, “Battlestar Galactica”).
Aquaman (guest star Alan Ritchson) and his new wife Mera (guest star Elena Satine) team up with Clark to free Oliver. Lois is frustrated when Clark continues to push aside her offers to help the team and sets out to prove she can play with the big boys.
Tom Welling directed the episode written by John Chisolm.

A new episode of SUPERNATURAL, Clap Your Hands If You Believe, follows at 9:00 Pm/8 Central.