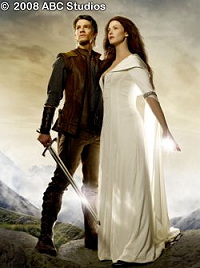 Comedy Central’s first foray into classic sword & sorcery spoofery, KROD MANDOON AND THE FLAMING SWORD OF FIRE, pretty much sums up its own level of humor right there in the title. See, it could be “… and the Flaming Sword” or “… and the Sword of Fire,” but making it “… and the Flaming Sword of Fire” makes it goofy and screwball by using the same basic adjective twice. Right? Isn’t that silly, and clever, and … anyone?

KROD MANDOON ‘s hour-long premiere on Thursday, April 9th at 10PM, “Wench Trouble”/”Golden Powers,” also gives us further insight into the level of humor in its titles. (Really, it was just the first two half-hour episodes strung together.)  The word “juvenile” is too kind. In a cracked nutshell, Krod Mandoon (Sean Maguire)  is a freedom fighter during the bygone Makonian Empire, where the evil Chancellor Dongalor (Matt Lucas) seeks to crush the rebellion while overthrowing despotic Emperor Zanus and ruling the empire himself. Krod is joined in his battles by Aneka (India de Beaufort), a pagan priestess/warrior whose main weapon is her insatiable libido; Loquasto (Steven Speirs), Krod’s oafish, ogre-ish servant; and Zezelryck (Kevin Hart), an African sorceror whose greatest magick is his ability to B.S. Together, they set out to free resistance leader General Arcadius (Roger Allum) from Dongalor’s dungeon. During the breakout, Arcadius is fatally wounded, but his lover Bruce (Marques Ray) — it was a long two weeks in that dungeon — vows to join the fight for freedom. Meanwhile, Dongalor has reclaimed an ancient weapon that laid waste to Atlantis, the Eye of Galga Gremda, and could be the key to his ruling the world … if he can just stop killing peasants and messengers long enough to figure out how it actually works.

KROD MANDOON AND THE FLAMING SWORD OF FIRE looks to have a long, drawn out storyline in place, which would be true to the epic fantasy films and sword and sorcery tales it’s spoofing. The problem is, the cast is barely adequate at best, and often just plain bad. Maguire’s thin-skinned, insecure Krod (“dork” spelled backwards, get it?) looks like he’d be more at home co-starring with Seth Rogen in some inane slacker comedy (special cameo appearance by Jack Black!) than swinging a sword, flaming or otherwise. Lucas is just grating and reads his lines like he needed another couple of hours of rehearsal. De Beaufort looks great in her slinky, sexy, quasi-Xena outfits but otherwise barely registers. Speirs is the only one that actually fits his character, with halfway decent make-up giving him the look of a troll-human hybrid. But, his poor aim with a crossbow is a running joke that wore thin inside of just ten minutes! The jokes are tired and mostly uninspired, and the reliance on stereotypes is both boring and lazy.

Part of the problem is that the spoof genre has fallen on truly hard times. 1948’s ABBOTT AND COSTELLO MEET FRANKENSTEIN is arguably the greatest spoof of its kind, because if you remove all the schtick, you still have a halfway decent Universal Pictures classic monster mash. Mel Brooks and Buck Henry perfected the half-hour format with the original GET SMART in the 1960s; then Brooks went on to create comedy classic spoofs like BLAZING SADDLES, YOUNG FRANKENSTEIN, and HIGH ANXIETY. The team of Zucker-Abrahams-Zucker upped the ante with 1980’s AIRPLANE! and followed up with the short-lived 1982 series POLICE SQUAD! But, soon, Brooks started to falter with offerings like LIFE STINKS (1991), ROBIN HOOD: MEN IN TIGHTS (1993), and finally, the atrociously unfunny DRACULA: DEAD & LOVING IT (1995). Z-A-Z gave us TOP SECRET! (1984) and a few good THE NAKED GUN: FROM THE FILES OF POLICE SQUAD! outings, but then took over the already terrible SCARY MOVIE franchise from the Wayans Brothers. Their involvement as producers with garbage like DATE MOVIE, EPIC MOVIE, and SUPERHERO MOVIE shows how badly things have declined. (And yet, their direct-to DVD THE ONION MOVIE, based on the spoof news website, had its moments.)

Decent fantasy film spoofs do exist, but for my money the best was actually the syndicated series HERCULES: THE LEGENDARY JOURNEYS and XENA: WARRIOR PRINCESS. Both shows brought a 1990s sensibility to the genre, but usually brought wit to even the most serious storylines. However, when they decided to get goofy, both shows knew how to affectionately skewer their genre quite effectively and cuttingly. (I know, I know: collective groan!)

So, it was into this environment of cookie-cutter spoofs that depend on cheap laughs from poop and fart jokes, lazy guffaws from outrageous stereotypes, and not much real understanding of the wealth of comedy gold to be mined from sword & sorcery flicks, that KROD MANDOON AND THE FLAMING SWORD OF FIRE was hewn. Seriously, have none of these writers ever read Harvard Lampoon’s “Bored of the Rings”? Didn’t they see the STAR WARS vs. LORD OF THE RINGS scene in CLERKS II? There’s plenty of stuff to make fun of in fantasy films and fiction, whether it’s done with reverence or with brutal kicks to the crotch. But none of that was on display in the series’ premiere. And that doesn’t bode well for the half-hour episodes to follow, every Thursday at 10:00 PM, on Comedy Central.