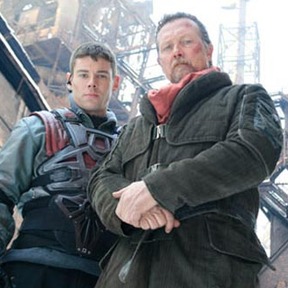 
In tonight’s episode of STARGATE UNIVERSE “Epilog”, The Destiny’s crew must decide what to do with the refugee/descendants they’re carrying, as they discover their world is dead and uninhabitable.
SGU airs at 9:00 PM ET/PT on SyFy, as it head for its final episodes.
Afterwards, SANCTUARY moves into Mondays at 10:00 ET/PT, with the episode ‘One Night’. Star Amanda Tapping directed this enty, wherein Will and Abby are kidnapped, and Dr. Magnus myteriously cancels the team’s rescue plans when she learns who abducted the two.
April 25, 2011

Here’s a sneak peek of tonight’s episode of STARGATE UNIVERSE, The Hunt.

Chloe’s (Elyse Levesque) body is taken over by the mind of someone the crew believed was dead. Meanwhile, Dr. Volker (Patrick Gilmore) is striken with an illness that threatens his life.
Written by Carl Binder.

SPOILER: The ‘dead’ character is Ginn (Julie McNiven), the Lucian Alliance girl who had a brief affair with Eli (David Blue) before being killed.
STARGATE UNIVERSE airs tonight at 10:00 PM/9:00 Central on SyFy.

The last ten episodes of the cancelled  STARGATE UNIVERSE begin on Syfy tonight at 10:00 PM ET/PT.
In the mid-season cliff hanger, ‘Resurgence’,  the crew of the Destiny was caught in the midst of  a battle that they were tricked into by the “seed-ship” aliens.  In ‘Deliverance’ we’ll see how the ship survives.  (See Clip)
Despite the cancellation, producer Brad Wright seemed upbeat, talking to BlastR.

“I’m pretty happy with the whole back 10. I think we come back from the break very, very strong, with some really, really moving episodes and actually some big action stuff. ‘Deliverance,’ which is the second part of the two-parter, has a ton of action in it.”

Next week will bring the episode ‘Twin Destinies’ .
“It’s actually a very big story too. It’s got a ton of scope and a significant amount of action, as well. … It sets up a huge story arc that will follow up the rest of the season. And I don’t really want to spoil it beyond that. I just want to say that there’s something that is initiated that takes place and carries on through the rest of the story.”

Are there any hopes for a real conclusion to STARGATE UNIVERSE or more of the franchise? Brad Wright seemed optimistic.

“There might be other possibilities out there, and maybe even a miniseries or movie. It’s not necessarily the end of the world.”

See the entire interview at the link above.

SGU and Sanctuary Return to SyFy

Syfy released the news of when its cancelled series STARGATE UNIVERSE will return, as well as the second half of Season Three of SANCTUARY.

“STARGATE UNIVERSE – Returns Monday March 7, at 10PM – Syfy’s drama-adventure series returns for its anticipated final ten episodes. The new episodes pick up with the Destiny crew in a battle with a drone command ship and the surprise arrival of the aliens that abducted Dr. Nicholas Rush (Robert Carlyle) and Chloe (Elyse Levesque). The final season culminates with a dramatic conclusion for the fate of the Destiny crew, who face a difficult crossroads when they realize the time has come for them to take a risky stand … or they will be left adrift forever.
Guest stars appearing in the final episodes include Victor Garber (Alien, Titanic), French Stewart (3rd Rock From The Sun), Robert Picardo (Stargate SG-1, Star Trek: Voyager, China Beach), Kathleen Quinlen (Apollo 13) and Julie McNiven (Supernatural, Mad Men).
Robert Cooper and Brad Wright, of Stargate SG-1 and Stargate Atlantis, serve as executive producers and writers. SGU is produced and distributed by MGM Worldwide Television Distribution.


SANCTUARY – Returns Friday April 15, at 10PM– Syfy’s original series returns with the next all-new 10 episodes of season three! The adventures pick up in the events of the mid-season finale’s cliffhanger, with the team at the mercy of the inimitable Ranna, played by Polly Walker (Caprica, Rome).
Sanctuary stars Amanda Tapping as the brilliant Dr. Helen Magnus, Robin Dunne as forensic psychiatrist Dr. Will Zimmerman, Agam Darshi as Kate Freelander, Ryan Robbins as Henry Foss and Christopher Heyerdahl as John Druitt.

One of television’s most groundbreaking series, shooting almost entirely on green screen, Sanctuary was the first television series in North America to use the RED camera exclusively. Its stunning visual effects were nominated for a 2008 Emmy Award. Created by Damian Kindler (Stargate SG-1, Stargate Atlantis), Sanctuary is produced in association with Syfy and is distributed by Tricon Films and Television. Season three of the series is executive produced by Damian Kindler, Amanda Tapping, Martin Wood, Keith Beedie and Tricon Films.”

They also released details of their “un-scripted” shows”.
DESTINATION TRUTH, with a Live St. Patrick’s Day Investigation, which will then  move to a new night on Tuesday March 22, at 9PM.
MARCEL’S QUANTUM KITCHEN – “Series Premiere Tuesday March 22, at 10PM – Syfy unveils the future of food with a daring new hi-tech cooking series for the modern age, featuring Top Chef’s Marcel Vigneron, one of America’s most notorious chefs on the cutting edge of the culinary field.”
Seriously? A cooking show?
FACT OR FAKED: PARANORMAL FILES – Season Two Premiere Wednesday March 23, at 10PM. 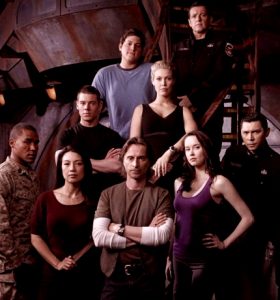 
Towards the end of the first season, the show began to show other sides to the sometimes baffling attitudes and hostile personalities of the trapped military personnel and scientists. This year we got more insight, and a real level of empathy was developing. But for the average viewer, it was too little, too late.
According to the item, STARGATE UNIVERSE recently averaged only a 0.5 in viewers 18 to 49, apparently below the average ratings for SyFy’s shows that are being renewed.
A similar thing happened with the BATTLESTAR GALACTICA spin-off CAPRICA, canceled last month. The GALACTICA reboot might have been  grim at times, but it made the viewer care about it’s flawed characters. The spin-off did not lay the groundwork of getting the audience to empathise with its major (and many minor) players before taking them down dark pathways.
Tellingly, the shows that are returning are the frothy, ‘quirky’ dramedies, WAREHOUSE 13, EUREKA, and HAVEN. Those shows rate well, featuring engaging, amusing and/or sympathetic characters.
Perhaps this will be a lesson to genre television producers: Build your characters up, before tearing them down.
December 17, 2010

“The crew’s newfound control over Destiny’s flight path introduces new risks when they find themselves in the middle of a war between two races.”