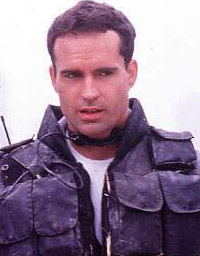 According to Deadline, Jason Patric (SLEEPERS, THE LOSERS) has been cast as the male lead in POWERS, a TV pilot for FX based on the comic book by by Brian Michael Bendis and Michael Avon Oeming.
Patrick will be playing Christian Walker, a formerly super-powered police detective in a world in which superhumans are fairly common. He joins co-star Lucy Punch (HOT FUZZ, BAD TEACHER) as Homicide detective Deena Pligrim. They’re assigned to cases believed to invovle metahumans, known as “powers”.


Their boss is Captain Cross, played by the previously announced Charles S. Dutton (ALIEN 3, THRESHOLD).
The TV Movie/pilot was written by Charles H. Eglee (DARK ANGEL, THE WALKING DEAD) and will be  directed by Michael Dinner (the BIONIC WOMAN reboot).
Shooting  is expected to begin in Chicago mid-summer by  Sony Pictures Television and FX Productions.

Deadline.com reports that CBS is negotiating a deal to co-produce with Sony Pictures Television a new version of of the 1960’s sci-fi/spy western THE WILD WILD WEST.
Ronald D. Moore (STAR TREK, BATTLESTAR GALACTICA) and Naren Shankar (CSI) are set to write and executive produce the pilot for the series.
The original show ran on CBS  from 1965-1969, created by producer Michael Garrison as a kind of “James Bond on Horseback”, and filmed at the CBS Studio Center —the former home of Republic Studios, where countless westerns were shot from the 30’s through the `50’s.
WILD WILD WEST was an unusual show, mixing the 1870’s setting with high-tech gadets and outright science fictional concepts. Today it would be called Steam-Punk, but back then there was nothing else like it.
James West and Artemis Gordon were agents of the U.S. Government, Secret Service members often working directly on the orders of President Grant, in a West under constant threat of incredible subversive plots and schemes for domination, both for profit and political ends. They traveled in a luxurious private train (The Wanderer), and used the latest technology in novel and  ingenious ways.
The action, made larger than life with a crack stunt team and it’s athlethic and intense star Robert Conrad, was a highlight.  Ross Martin’s character provided  plenty of color in a myriad of disguises. The co-stars’ onscreen chemistry and humor seemed to charm the public into accepting the outrageous situations offered up weekly.
The 1999 movie starring Will Smith and Kevin Kline failed to re-capture the spirit of the show.
Perhaps CBS will have another HAWAII 5-0 reboot success story to tell, if all goes as hoped.