Godzilla fans in New Hampshire get a rare chance to see a 35mm print of SON OF GODZILLA on the big screen – as part of the Colonial Theatre’s Fouth Spooktacular, a semi-annual event co-presented by SATURDAY FRIGHT SPECIAL, a local cable-access show. The presentation includes vintage monster movie previews, cartoons, and give-aways. Horror comic artist S.R. Bissette (SWAMP THING) will be donating an original Godzilla sketch.
The Colonial Theatre is located at 95 Main Street in Keene, New Hampshire. Phone: (603) 352-2033 or  (800) 595-4849.
Showtime is 2:00pm on July 31. Tickets are $10.00, available at the door.
Read the press release below:

KEENE, NH – July 1, 2010: Giant monsters once again return to Keene, NH at The Colonial Theatre’s SPOOKTACULAR, Saturday, July 31st 2010 at 2PM. Curated by Saturday Fright Special, New Hampshire’s first home-grown horror host TV show, the event features a rare 35mm screening of the 1967 Japanese monster melee SON OF GODZILLA. In addition to the main feature, vintage monster movie previews, a cartoon, and snack bar ads will precede the film, along with prize giveaways and on-stage appearances by Scarewolf and other Saturday Fright Special characters. The event will be the finale of the Colonial’s annual Family Film Series, and will be an all-ages event, bringing back the feel of an old-time kiddie matinee.
“We’re thrilled to be able to present a Godzilla film to the Colonial audience on a Saturday afternoon, the same way that so many kids in the 70s first saw these films, both in the theater and on TV,” said Mark Nelson, SATURDAY FRIGHT SPECIAL curator for the event. “In fact, we’re giving fans an opportunity they never had back then to see SON OF GODZILLA on the big screen, as the film was released directly to television in the US.”
The film tells the touching tale of the bond between a father and son (who just happen to be 30-story giant lizards), and what happens when giant insects come between them.
The SPOOKTACULAR will also feature prize giveaways including an original Godzilla sketch from renowned artist S.R. Bissette, as well as signed copies of a new Bissette comic that will premiere at the event. The costumed cast from Saturday Fright Special will be on hand to introduce the film and mingle with the public.
This will be the fourth Spooktacular presented by the Colonial Theatre, an event previously held in the evening. “We were looking at our Family Film Series schedule, and realized that the all-ages audience for past Spooktaculars would make it an ideal way to cap off our summer matinee series,” said Jessica Reeves, Director of Audience Services and Marketing for The Colonial Theatre. “We noticed a large number of parents bringing their children to our previous evening Spooktacular events, and realized that a daytime show would better serve those young and old who have a hard time staying up past a certain hour,” she laughed, “It’s hard to compete with the Sandman.”
Tickets are on sale now ($10 general admission). For more information, or to purchase, call The Colonial Theatre Box Office at 603/352-2033, toll free at 800/595-4849 or visit TheColonial.org.
About SON OF GODZILLA: A scientific team sets up camp on a remote island to conduct weather-controlling experiments, and unwittingly create giant man-eating insects, and only Godzilla and his young Son can save the day. Released in 1967 in Japan, this film marked a turning point for the Godzilla series, steering them away from the harsher elements of earlier films and aiming them directly at children. It is fondly remembered by a generation of Americans who first saw it on local TV as kids, and the sight of the Son of Godzilla attempting to breathe fire but instead blowing smoke rings is an oft-referenced pop-cultural touchstone.
AboutSATURDAY FRIGHT SPECIAL: Saturday Fright Special is New Hampshire’s first home-grown horror-host television program, featuring the best (and worst) public domain horror films from the 1950s to the 1970s. Hosted by Scarewolf, a well dressed werewolf with a good sense of rhythm, Saturday Fright Special evokes the spirit of drive ins and independent TV stations of days gone by, with vintage commercials, snack bar ads, and comedy bits sprinkled throughout the show’s two hour running time. Additional characters lend a hand in presenting the films, including Santoro The Honduran Grappler (a masked wrestler who fights for strong moral character and good nutritional values), Tae Kwon Dunk (a mischievious basketball-headed martial artist), and Morbia Poppatoppolis (a demented domestic diva). Saturday Fright Special airs weekly on public access stations in over 20 states coast to coast.
About The Colonial Theatre: The Colonial Theatre is a non-profit performing arts center serving the greater Monadnock region in fulfilling its vision to be the model regional performing arts center, exciting, educating and challenging audiences of all ages. In its 16th year as a non-profit organization, The Colonial Theatre presents world class live performances, acclaimed film selections, and hosts numerous community events for the benefit of local non-profit organizations. For more information, please visit TheColonial.org.

This film is from the goofy era when Godzilla was mutating from a radioactive menace into a lovable hero. The tone is definitely geared for younger viewers, and it’s impossible to take the proceedings seriously. And yet, SON OF GODZILLA is actually quite entertaining on its own juvenile level, filled with strong performances, exotic locations shooting, colorful special effects, enjoyable music, lots of action, and plenty of laughs.
The story focuses on a group of scientists conducting experiments on an isolated South Seas island. Their initial test (an attempt to change weather) runs afoul of unexpected high-frequency interference – which turns out to be a telepathic cry for help from a mysterious egg that is unearthed by a group of giant preying mantises. The botched test creates a torrential downpour of contaminated rain that somehow enlarges the preying mantises even further. They break open the egg, revealing a baby Godzilla, but before they can kill it, the elder Godzilla arrives, responding to the signal that ruined the test. The scientists, along with a reporter who parachutes in, looking for a story, and an orphaned island girl, try to finish their experiments in spite of the monsters; the girl even feeds coconuts to the baby Godzilla, named Minya. But then things really get bad: a giant spider emerges from its rocky lair and engages in a life-or-death battle with the father-and-son dinosaurs. The scientists launch another test just before escaping on the life raft. As Godzilla and Minya finish off the spider, the test reverses the sweltering tropical temperature, resulting snowfall on the island. As a submarine surfaces to rescue the scientists, they see Godzilla and Minya huddle together, going into hibernation in the freezing cold.
Unlike the previous entry in the series, GODZILLA VS THE SEA MONSTER, which asked you to check your brain at the door and enjoy a spy-movie-action no-brainer, SON OF GODZILLA only asks that you enjoy the film as fun-filled family entertainment. The image of Godzilla as paternal protector is completely at odds with the monster’s radioactive origins, but if you can jump that mental hurdle, SON OF GODZILLA is actually quite a bit better than its most obvious equivalent, the silly SON OF KONG (1933).
SON OF GODZILLA’s light-hearted tone is underlined by the music of Masuro Sato (who had previously scored GODZILLA VS. THE SEA MONSTER). His jazzy, upbeat themes suggest a cool ’60s action flick, abandoning the ponderous, serious tone of Akira Ifukube, who had scored most of the previous Godzilla films. Likewise, director Jun Fukuda goes for a fast-pace, with an emphasis on the entertaining action rather than sober scares. This approach, combined with colorful production design, creates a sort of artificial movie atmosphere that is almost the cinematic equivalent of a comic book – it’s fun to look at, even if you don’t believe it.
The special effects are a step up from the previous film. At a time when Toho studios was shaving budgets by moving away from expensive composite photography, the film is filled with special effects shots that combine live-action with the miniature monsters to great effect. The work may not be convincing (in fact, wires are often visible operating the mantises and the spider, which are large marionettes, not actors in suits), but it does establish a style that becomes its own justification, creating not a picture of reality but a make-believe world filled with scary dangers (scary to kids, that is). Special effects director Sadamasa Arikawa (taking over for Eija Tsuburaya, who had moved on to television work on series like ULTRAMAN) expertly choreographs the monster actions and battles – the movements of the giant mantis and spider that Godzilla fights are all impressive.

The design work for the insects and the arachnid are quite good. Unfortunately, the younger Godzilla looks nothing like his famous parent: he’s roly-poly and cute – obviously designed to enchant kids. Even worse, the Godzilla suit in this film is infamous among fans for being one of the worst in the series—with big white eyes that give a Muppet-type look to the king of the monsters, apparently in an attempt to make him more human and likable. Even with these changes, there is little resemblance to his son, who is mostly used to comic effect.
Strangely, the film remains enjoyable in spite of its problems. By this time in the series, the serious science-fiction trappings of 1954’s GOJIRA had long been abandoned in favor of a fantasy approach. However, if you’re willing to suspend disbelief, the results are amusing. This is definitely a camp movie, but a thoroughly enjoyable one, and the scene of Godzilla and son going into hibernation together as the snow covers them is surprisingly effective.

At one point, Godzilla attempts to teach Minya to use his radioactive breath, but the poor little tyke only blows smoke rings – until the angry parent stomps on his tail, causing the youngster to spew the desire radioactive halitosis. Shortly thereafter, Godzilla takes a nap, and Minya plays jump rope over his twitching tail!
In one excellent shot (beautiful to behold on a cinemascope movie screen), the live actors take cover behind a metalic structure in the foreground, while the giant spider walks from left to right through the miniature jungle in the background. The action is perfectly timed, the blend of full-scale and miniature elements is convincing, and the movement of the spider is perfect.

Haruo Nakajima, the man inside the Godzilla suit throughout the 1950s, 1960s, and into the ’70s, gets a rare screen credit for his performance in SON OF GODZILLA. Ironically, he is not in much of the film, appearing only in those scenes wherein Godzilla is seen rising out of the ocean near the beginning. (The old Godzilla suit seen in previous films was resued for this scene.) All of Godzilla’s scenes on land are performed by Seiji Onaka, a taller actor, in a new suit made to look less threatening. The reason for the casting change is that the titular Son of Godzilla is performed by a midget wrestler (“Little Man” Marchan), and it was necessary to get a taller actor in the Godzilla suit, so that there would be a greater distinction in height between Godzilla and his son.
This is the first film to use the phrase “Monster Island,” although in this case it is casually tossed off by a reporter to describe the fact that the tropical island is inhabited by a handful of monsters (giant preying mantises, a giant spider). In subsequent Toho films, Monster Island would specifically refer to an island where the the entire pantheon of monsters from previous films (Rodan, Mothra, etc) were gathered together.
On the original Japanese-language soundtrack, the spider is called Kumonga, and the giant mantises are called Karakuras. For the English-dubbed version, the monster’s names were changed to, respectively, Spiga and Gimantis. 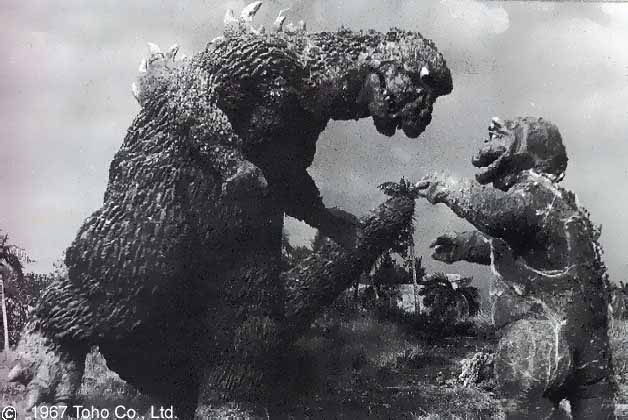