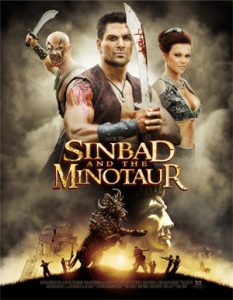 Indie American World Pictures tells us they’ve teamed up with SyFy to produce a new tale in the legendary voyages of Sinbad, SINBAD AND THE MINOTAUR,  starring Manu Bennett (SPARTACUS: Blood and Sand).

“In this re-imagining of Greek and Arabic folk tales, the legendary voyager and his hearty crew of sailors and adventurers seek a long lost treasure.
Sinbad, armed with rumors of ancient gold, finds himself sneaking into the desert camp of the evil sorcerer Al-Jibar. Hidden among the many relics is an ivory scroll case containing the logs of the pirate Captain Minos, which will lead Sinbad to the golden head of the Colossus of Rhodes. Also in Al-Jibar’s tent, Sinbad finds the captured princess Tara, taken and forced into Al-Jibar’s harem.
Now Sinbad must decipher the map, rescue a princess and defeat the fearsome Minotaur guarding the Colossus, with the angry sorcerer hot on his trail, in the quest of SINBAD AND THE MINOTAUR .”