“I reeeeeally want you to review UNDER THE SKIN for HOUR OF THE WOLF,” Jim Freund said to me a couple of weeks ago. That was good, because I reeeeeeally wanted to review UNDER THE SKIN, but constraints — both on time and finances — meant that I needed a good reason to get to it. Since we were committed to reviewing CAPTAIN AMERICA: THE WINTER SOLDIER — an okay film, but not really more than that — on the CINEFANTASTIQUE SPOTLIGHT the week UNDER THE SKIN was debuting, Jim’s advocacy was just the motivation I required.
So let it be noted, in case you had any doubt, that this confirms Jim Freund’s status as a fighter on the side of the angels. I’ve had a cautious relationship with UNDER THE SKIN director Jonathan Glazer — I felt SEXY BEAST was good but overrated, and BIRTH was… odd — but there’s no such caution here. In telling the tale of an alien predator who takes the form of Scarlett Johansson and stalks the highways of Scotland, Glazer seems to have found the perfect stage for his restrained approach to storytelling. After having to sit through the dreary slog that was OCULUS, seeing something this daring, this entrancing, was just what I needed to restore my own, personal “Sense of Wonder.” Click on the player to hear my review.

LISTEN TO HOUR OF THE WOLF
EVERY THURSDAY AT 1:30 AM
ON WBAI 99.5FM IN NEW YORK CITY


Well, they can’t all be NOAH, but then again, they all don’t need to be VAMPIRE ACADEMY, either. On the spectrum of the Marvel Comics franchise films, CAPTAIN AMERICA: THE WINTER SOLDIER doesn’t reach the cinematic heights of the Raimi SPIDER-MANs (oh, okay, the first two SPIDER-MANs) or Whedon’s THE AVENGERS, but doesn’t crater out anywhere near the THOR or (shudder) FANTASTIC FOUR efforts. Filing my review for Jim Freund’s HOUR OF THE WOLF, I was happy (relieved, even) to note the not inconsiderable pleasures of this new chapter in the chronicles of America’s most patriotic superhero, even if I also feel duty-bound point out the ways it could have been better. Click on the player to hear the review.


Your user agent does not support the HTML5 Audio element.

LISTEN TO HOUR OF THE WOLF
EVERY THURSDAY AT 1:30 AM ON WBAI 99.5FM IN NEW YORK CITY


And so commences the Marvel Onslaught of 2014. Four movies, three studios, and more opportunities for the true believers to nudge each other knowingly when Stan Lee makes his expected cameos, even though your great-great-grandmother could probably recognize him by now. That said, there are far worse ways to kick off this flood than CAPTAIN AMERICA: THE WINTER SOLDIER, a well-mounted, surprisingly well-acted (hey, you’ve got Sam Jackson and Robert Redford in there), and all-around entertaining actioner that finds the stalwart Steve Rogers (Chris Evans) facing a test to his WWII-bred notions of right and wrong as he finds himself suddenly at cross-purposes to his masters at S.H.I.E.L.D and confronting a formidable assassin called the Winter Soldier.
The Cinefantastique Spotlight crew of Steve Biodrowski, Lawrence French, and Dan Persons are no little grateful that THE WINTER SOLDIER goes down as easy as it does, but are in accord that there were ways it could have been much better. We compare notes in this latest episode — click on the player to hear the show.

And, after all the paranormal activities and interstellar warfare and superhero histrionics and marooned astronauts and rampaging monsters and quasi-mythical heroes and super-powered teens (soooooo many super-powered teens…), it comes down to this: One man, broken but beautiful, who in the near future finds himself falling in love with his computer’s surprisingly human operating system.
HER — written and directed by Spike Jonze and starring Joaquin Phoenix as the flesh-and-blood suitor and the voice of Scarlett Johansson as his digital object of affection (and co-starring Amy Adams and Rooney Mara) — is sweeping up praise for its innovative take on the classic love story, but has its influence been overstated? In yet another lively discussion, the Cinefantastique Online team of Steve Biodrowski, Lawrence French, and Dan Persons stake out a wide spectrum of positions on the film, from new classic to seriously overhyped. Click on the player to hear the show.

There are so many ways a grand conglomeration of super heroes could turn into a car wreck (case in point: THE FANTASTIC FOUR), that we should be grateful when a film manages just to clear that bar. Fortunately, and quite happily, THE AVENGERS not only manages that base-line feat, but goes far beyond it, becoming a rare example of a top-notch comic book movie. Granted, the team-up of Iron Man (Robert Downey Jr.), Captain America (Chris Evans), Thor (Chris Hemsworth), and The Hulk (Mark Ruffalo), aided and abetted by Black Widow (Scarlett Johansson) and Hawkeye (Jeremy Renner), doesn’t boast much more than a bare-essentials plot — demigod Loki (Tom Hiddleston) wants to take over the Earth ‘cuz… well, just ‘cuz — but under the direction of Joss Whedon, the proceedings offer enough kick-ass action and delicious character moments that plot barely matters.
Come join Cinefantastique Online’s Steve Biodrowski, Lawrence French and Dan Persons as they break down the first official blockbuster of summer 2012 to find out what makes it pop and where it fizzles. Also: What’s coming to theaters. 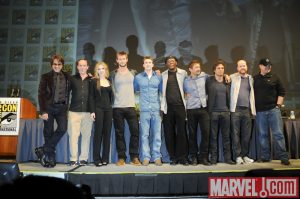