According to Deadline.com, Anne McCaffrey’s epic  Dragonriders of Pern series of novels may finally reach the screen.
David Hayter (X-MEN, WATCHMEN, LOST IN OZ) will write a screenplay based on Dragonlight, the first novel in the series, which seems very much in the fantasy realm, but is grounded in science fiction. The two novellas (Weyr Search and Dragonrider) that comprise Dragonlight were orginaly published in Analog, the foremost American science fiction magazine.
Steve Hoban’s Copperheart Entertainment and Benedict Carver’s Dark Hero Studios, along with  Don Murphy and Susan Montford (TRANSFORMERS) of Angry Films,  will partner on the production.
Distributor Entertainment One is a part of the project, securing distribution in Canada, and negotiating with other territories.
Steve Hoban has apparently been championing a Dragonriders film for 14 years.
Previous attemtps were made to turn the books into a film or televsion series, the first notable effort by  Alliance Atlantis (CSI, DUE SOUTH).
Ron Moore (BATTLESTAR GALACTICA) apparently had a deal in place to turn the show into a series for the WB network  in 2002, only to walk away late in pre-productionwhen the network unexpectly decided to try to turn it into a copy of BUFFY THE VAMPIRE SLAYER.
There are now 22 novels in the series, wriiten by both Anne McCaffery and her son Todd McCaffrey, set on the planet Pern, where a lost Earth colony has regressed to a medieval society, with low technology (generally) and a highly stratified social system.   Intellgent, telepathic flying dragons are ridden by a warrior class that bonds with them at hatching.
The series has inspired graphic novels, games and music.

From the set of 17th PRECINCT, former BATTLESTAR GALACTICA star Tricia Helfer posted this picture of herself and her BSG pals James Callis and Jamie Bamber on her Twitter account.
The NBC pilot by writer/producer Ron Moore reunites the trio as police dectectives and coroner in the series, which takes place in a world where magic and the supernatural are normal components of their investigations.
Note that the above is a personal snapshot, and note an officially released photograph.
(via SFX) 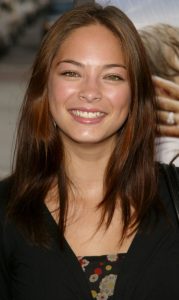 TVLine reports that BATTLESTAR GALACTICA’s  Jamie Bamber has been cast in BSG producer Ron Moore’s 17th PRECINCT pilot for NBC.
The show, described as  a ensemble police drama, set in a fictional town named  Excelsior, “where magic and with supernatural elements rule over science”.
Jamie Bamber is set to  play Caolan,  a crime scene detective.  He’s coming off OUTCASTS, a UK SF series that hasn’t yet hit American shores.
Already cast is Stockard Channing (PRACTICAL MAGIC, BATMAN BEYOND), who the role of Mira, a former homicide detective, now working in the robbery division.


Sounds a bit like the dark “magical” world of CAST A DEADLY SPELL (1991), or the recent, comic book-based PARADOX, which starred genre vet Kevin Sorbo as a policeman in a world where magic, rather than science held sway.