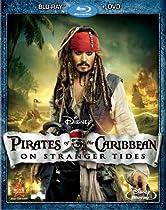 From Walt Disney Pictures, the
Official Trailer for PIRATES OF THE CARIBBEAN 4: ON STRANGER TIDES, including a special introduction from Capt. Jack Sparrow himself. (Johnny Depp, matey…)
“Produced by Jerry Bruckheimer and directed by Rob Marshall, “Pirates of the Caribbean: On Stranger Tides” captures the fun, adventure and humor that ignited the hit franchise—this time in Disney Digital 3D™.
Johnny Depp returns to his iconic role of Captain Jack Sparrow in an action-packed tale of truth, betrayal, youth and demise. When Jack crosses paths with a woman from his past (Penelope Cruz), he’s not sure if it’s love—or if she’s a ruthless con artist who’s using him to find the fabled Fountain of Youth. When she forces him aboard the Queen Anne’s Revenge, the ship of the formidable pirate Blackbeard (Ian McShane), Jack finds himself on an unexpected adventure in which he doesn’t know who to fear more: Blackbeard or the woman from his past.
The international cast includes franchise vets Geoffrey Rush as the vengeful Captain Hector Barbossa, and Kevin R. McNally as Captain Jack’s longtime comrade Joshamee Gibbs, plus Sam Claflin as a stalwart missionary and Astrid Berges-Frisbey as a mysterious mermaid. In theaters Memorial Day weekend, 2011.”

Reaction to the announcement that the PIRATES OF THE CARIBBEAN franchise would get a 4th film has been met with great fanfare from the hardcore “Sparrowheads”, and a more shoulder-shrug reaction from the rest. But despite which of these camps you fit into, the buzz machine keeps on rolling as today saw the release of the first on-set picture of Johnny Depp’s co-star Penelope Cruz. Cruz is just one more addition to a cast already chock full of amazing actors including Geoffrey Rush reprising his role as Barbossa, and Ian McShane making his debut as the infamous Blackbeard.
PIRATES OF THE CARIBBEAN: ON STRANGER TIDES is currently filming and is slated to be released May 20th, 2011.
[serialposts]