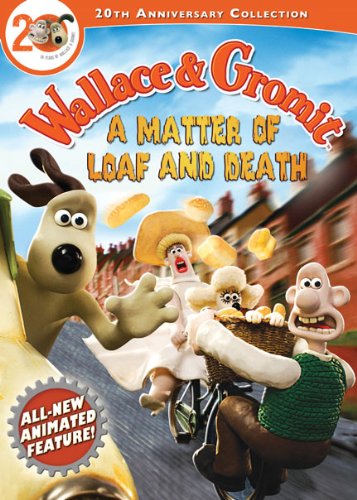 Wallace and Gromit are back in an all-new animated adventure. After the entertaining but disappointing WALLACE AND GROMIT: THE CURSE OF THE WERE-RABBIT (which seemed stretched a bit thin at feature length), creator, director, and co-writer Nick Park returns his delightful plasticine pals to their preferred format, the half-hour short. Even if the results do not quite live up to their best work (THE WRONG TROUSERS, A CLOSE SHAVE), A MATTER OF LOAF AND DEATH is nevertheless another fine mess, loaded with droll dialogue and amusing sight gags.
In the tradition established by THE WRONG TROUSERS, the plot of A MATTER OF LOAF AND DEATH is structured as a Hitchcockian thriller and executed with all the precision and craftsmanship of the genuine article; the humor derives from the amusing absurdity of seeing this story told through the medium of stop-motion.
That recipe may sound as appetizing as bread leavened with gunpowder instead of baking soda, but the dough rises to the correct level, creating a surprisingly good flavor combination, and nowhere is that combination more startlingly effective than in the opening scene: the stop-motion camera creeps up on the draftly naive Baker Bob (a play on co-writer Bob Baker’s name), who doesn’t realize until too late that a rolling pin is aimed at his skull. The shock of the (unseen) impact is almost enough to match that of a serious, live-action film – until Baker Bob falls face-first into his own dough, his glasses landing goofily on the back of his head.
That’s right, ladies and gentlemen: this charming family film begins with a brutal murder – and it’s funny! Not only that: A MATTER OF LOAF AND DEATH sustains the queasy combo of comedy and crime throughout. How? Well, it certainly helps to have the delightful duo of Wallace and Gromit stuck right in the middle of it.

In A MATTER OF LOAF AND DEATH, Wallace and Gromit run a bakery deliver service. On their route one day, they rescue Piella, a former poster girl for bakery advertisements, whose bicycle brakes seem to have gone out. When Gromit checks them out immediately afterward, the brakes seem functional, leading us wonder whether this was truly an accidental encounter. It turns out that Bob was the twelfth baker recently murdered, and the killer is intent on making it a baker’s dozen.  Is Wallace really the apple in Piella’s eye, or could shea and her poodle Fluffles be involved in the crime?
If there is a weakness with the story of A MATTER OF LOAF AND DEATH, it is that it tends to revisit elements from previous Wallace and Gromit films without expanding and improving on the ideas in a way that tops its predecessors (a neat trick that both THE WRONG TROUSERS and A CLOSE SHAVE pulled off). Essentially, this film recreates the story of A CLOSE SHAVE: Wallace meets and falls in love with a woman with a pet dog, who turn out to be involved in criminal activity; at least the dynamic is changed in terms of who is the perpetrator and who is the reluctant accomplice.
Nevertheless, A MATTER OF LOAF AND DEATH delivers a crackling mystery story in 30-minutes, filled with funny sequences that show off the beloved characters as they perform variations on their familiar themes (once again, thanks to Wallace’s amateur inventions, simply getting up in the morning is akin to being a marble hurtling through a Rube Goldberg device). The Hitchcockian homages are clearer than ever, including a dead-on recreation of Arbogast’s walk up the stairs of the Bates house in PSYCHO (1960), as Gromit investigates nefarious activity.

Mixed in are numerous other references: a roomful of mannequins (one for each murder victim) has an eerie ambiance worth of Mario Bava’s giallo films (e.g. BLOOD AND BLACK LACE); Gromit’s difficulty disposing of a bomb hilariously duplicates a similar predicament in BATMAN (1966), and James Cameron gets another shout-out (it was a Terminator-type dog in A CLOSE SHAVE; this time it’s a fight on a forklift that echoes Ripley’s power-loader battle with the queen in ALIENS).
The master craftsmanship displayed in scenes like this is all the more impressive when one considers the challenges of stop-motion, not only on a technical level but an artistic one: how do you “sell” this kind of material to an audience watching what looks like a colorful kiddie film? One of the great achievements of director Nick Park is that, although his stop-motion work display a charming old-fashioned hands-on approach, it also pushes the limits in terms of advancing the technique in modern ways.
The motion blur necessary to create a convincing sense of buildings flying by as a car races down the street is rendered so convincingly that you almost overlook what an achievement it is. And in another clever moment, Wallace is actually made to look as though he is leaping through the air in slow-motion. In effect, Park is proving that stop-motion animation, though apparently primitive in the era of modern computer-animation, can still provide the shots necessary to provide an exciting, visceral thrill.


Peter Sallis once again provides the voice of Wallace, the exaggerated accent providing the perfect opportunity for expressive lip-sync animation. (If you want to experience something unusual, pop TASTE THE BLOOD OF DRACULA or any of Sallis’ work for Hammer Films: hearing that voice come out of an actual actor – in a horror film – is positively surreal.) And once again, the silent Gromit steals the show with his expressive eye-rolls and pantomime gestures.
My initial reaction to A MATTER OF LOAF AND DEATH is one of slight disappointment. The bits and pieces form a colorful mosaic, but the finished work is not quite a successful whole. Although the  set-pieces are fun as always, the finale does not built to the sort of deliriously breathless climax we have come to expect; and it leaves our heroes too much on the sidelines as the guest stars take over. Still, to say that A MATTER OF LOAF AND DEATH is not quite another CLOSE SHAVE is hardly a criticism, and in fact my initial reaction to A CLOSE SHAVE was that it was not another WRONG TROUSERS. With such high expectations, disappointment is almost inevitable. Hopefully, that will pass (as it did with A CLOSE SHAVE), making it easier to judge A MATTER OF LOAF AND DEATH on its own worthy terms.

Other references and inside jokes